Useful Tips On How To Become A Great Musician 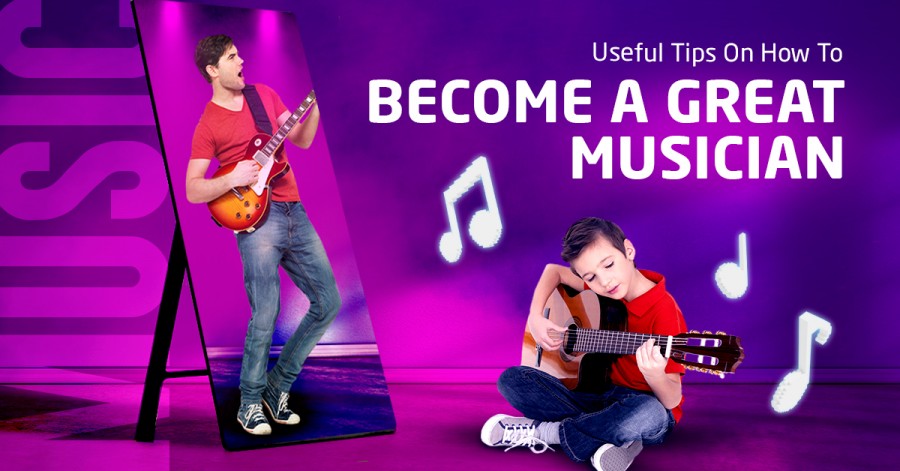 Perhaps, there’s no musician in the entire world who doesn’t want to improve their skills and get better. After all, music is all about improving constantly and you can spend your whole life mastering just one musical instrument. It takes a lot of time, effort, and dedication to actually be able to become a better musician, and aiming to be the best will obviously be more demanding than anything else.

The problem with the learning approach adopted by most young musicians is that they don’t focus on the right things that can actually help them in their musical journey. This is quite understandable since music has no definite curriculum and trying to define it is like trying to find out the limits of infinity. However, there are a few things that you can do to make sure that you improve faster than others and become one of the greatest musicians the world has ever known.

In this article, we’re going to take a look at some of the ways in which you can achieve your goal. Remember, it won’t be easy and it won’t be quick. No one promised you while picking up music that the journey would be easy, however, it’ll definitely be fun if you actually love music. These tips will help you improve your efficiency while learning new techniques and will also provide you with a clear path to take so that you can get better. So without further ado, let’s get to it and find out how you can be the next big thing in the music industry.

One of the biggest favors you can do yourself as a musician is, to be honest. Many times, we as musicians don’t like admitting that we’re not as good as the other guy. This is a universal problem with musicians and it’s acceptable because of the hard work all of them put into their art. However, not accepting your faults will only harm your growth. If you can’t even admit that your timing was a little off in the last song or that you weren’t as smooth as you should’ve been, you wouldn’t be able to change anything about it. The first step is to take a step back and look at yourself from an outsider’s perspective with the utmost honesty. Once you do this and detect where you went wrong, you’ll easily be able to rectify your shortcomings to get better.

Whenever a ship sets out on a long and arduous voyage, the captain of the ship defines where the ship is headed. Without proper direction and a place to go, the ship would just get lost in the ocean and eventually sink. The same goes for your musical career as well. If you don’t define what you want to be or what you want to be able to do, you can’t expect to improve. For example, with an instrument like the electric guitar, you have multiple fascinating techniques to learn. You can learn sweep picking, vibrato, finger tapping, shredding, or even work on the rhythm, however, if one doesn’t know what they want to master first, they’ll randomly keep on practicing all of these and not improve. You need to direct your efforts into one thing at a time so that you move on to the next one only after mastering your current endeavor.

Somehow, all the biggest mistakes made by musicians are related to their ego and overconfidence. There are very few musicians who don’t actually get way too overambitious. Every single musician, at some point in their lives, has made the mistake of aiming too high. This doesn’t mean that you should stop trying to improve, it just means that you should try and keep your goals realistic.

Taking the example of a guitarist again, you can’t expect to learn complicated riffs on day one. You’ll have to start slow with single notes, then move on to chords, and then you can move to legato and other complicated stuff. If you start too ambitious, it only guarantees that you’ll be frustrated soon enough and it might cause you to get disinterested altogether. So just try to contain your budding enthusiasm and channel it to the right areas instead of chasing unrealistic expectations you have from yourself.

Now coming to the most dreaded part, nothing you do can take the place of practice. Now you might think that it’s easy if you’re a beginner musician, however, practice means deliberate practice and not goofing around. Most of us do indeed goof around while practicing because the instruments are all just so fun to use. Try to control this impulse so that your practice sessions can be more productive. Don’t start playing the songs you’re good at, don’t start playing the riffs you know are easy but fun, instead, practice the things that you’re miserable at. An easy way to identify what to practice is to think about all the different techniques and pick the one that you absolutely hate. This will be the one that needs most polishing and practicing the dreaded techniques, riffs, or fills will help you take your game to the next level. Also, do try and practice on a regular basis rather than having just a single practice session per week. If you put in a few hours of practice every day, it won’t even be noticeable and you’ll improve little by little. This is much better than exhausting yourself by practicing only one day and then doing nothing the rest of the week.

Now that we’ve talked about practicing, it’s time to talk about not practicing as well. All the creatives in this world from writers to painters to musicians need to take a break every now and then. The reason behind this is the mental burnout that happens due to doing the same repetitive thing every day. Even if someone tells you to eat your favorite food for ten days straight, you’ll start to get bored and will want to puke it out. The same goes for music as well, no matter how much you love music, it can still get annoying from time to time. This is the most unlikely step for anyone wondering how to be a good musician, however, it’s one of the most effective ones as well. The break that you take from music will energize you so that you can come back and be more creative and inspired than you were before. Most musicians don’t want to take a break as they fear losing their skills, however, your skills aren’t a precious snowflake and they’ll not be lost even after years. So just do yourself a favor and take some time off to witness the benefits with your own eyes.

Practicing is good and fun if you’re shaking things up once in a while. However, it’s important to study theory as well if you want to be a well-rounded musician. You might think that theory is only for the classical musicians who don’t have fun anyways, however, it’s not true. Classical musicians do have fun once a year, but that’s not the point. The point is that music theory is an invaluable tool for all musicians regardless of which genre they play, which instrument they play, or at which level they play. Learning theory helps create a balance between learning and implementing which is necessary if you want to be one of the great musicians. No famous musician has ever ignored music theory because it’s very important in composing music rather than playing what others already have. So just start studying a little initially and it’ll help you stay in touch with music even when you’re not actually playing the instruments.

Maybe this is an ego issue or just a plain superiority complex, but every musician thinks what they play and listen to is the best. This is clearly not true since every musical genre has some sort of following which includes the people who think their genre is superior to others. There are so many different types of music and so many different instruments that you can listen to, but musicians choose to often limit themselves. If you’re serious about being a great musician, expand your tastes and try out new things. If you’re a heavy metal guitarist then listening to some classic rock and blues won’t hurt as it can inspire you to be better. Many prominent musicians have taken inspiration from totally unrelated musical genres and have gone on to improve their own style. So learn from the best and start listening to all types of music except “pop” since it’ll help you improve.

When you think about it closely enough, no one picks up a new instrument just to be the next prodigy or guitar hero. People start playing and listening to music because they love doing so. Music is all about enjoying what you have at the moment, however, as we mature as musicians, we forget about it. We start stressing over the little things and want to improve every minor detail but forget about enjoying the experience. Now, this isn’t just some inspirational talk to end the article, this is actually genuine advice that works. When you start enjoying what you play, there’s a moment of absolute bliss wherein you forget about everything else. This is what many people refer to as the flow state and it’s very coveted among multiple circles including musicians and gamers. When you let go of all the pressure, your performance improves significantly because you don’t have any performance anxiety. Not only does it benefit you while you’re in the midst of a performance but it also helps you last longer in your practice sessions. 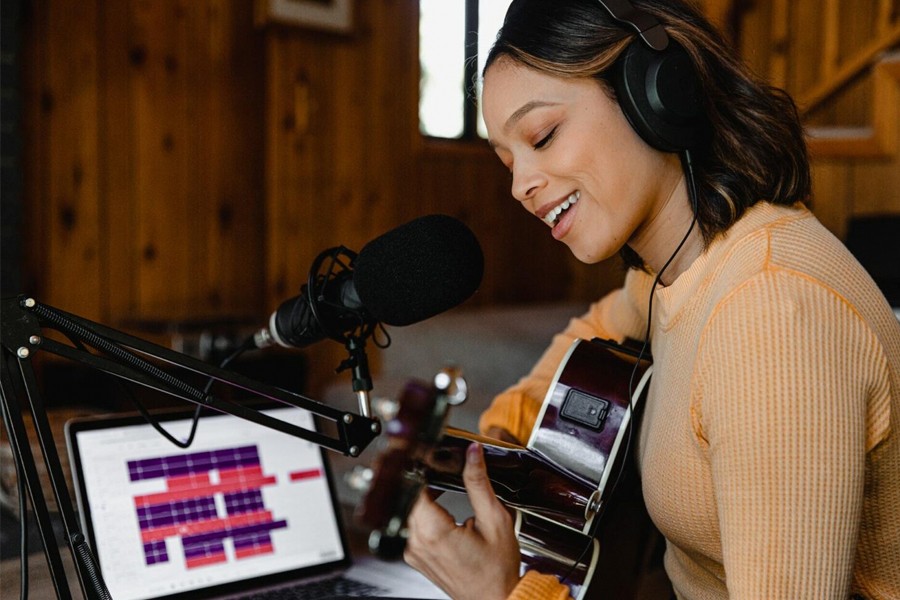 These are some of the most useful tips that you can utilize in your musical journey if you’re looking to improve. There are millions of people who pick up a musical instrument and leave it to gather dust after a while. However, there are also people like you who are willing to put in the extra work and rise above others to become actual legends. All the greatest musicians started somewhere and none of them were just born with exceptional musical skills. There are several other tips that different musicians can give you and there’s just no limit to improving, however, we’ve covered the basics that will fetch you the result you seek in the shortest amount of time. This article has outlined all the steps that you yourself can use to reach the level of the great musicians, however, you’re the one who’ll have to follow these steps and put in the effort to actually see the results.