TickiKids Test Partol mom Selena Tay and her family were invited to try out Cruise to Lazarus Island by White Sails. Read the review by Selena to find out more about this amazing island getaway!

It was a quiet weekday afternoon (Tue 19 Dec 1.00 p.m.) when we arrived at the meeting point (outside Sentosa Cove 7-11 Store, just beside the Marina's Visitor Car Park) to meet the Captain, at 1.15 p.m. (15 minutes before the trip). We did not face difficulties in getting there, following the clear directions given in the confirmation email. We got water and other canned drinks, and bought a packet of ice (as suggested by White Sails) to chill our drinks onboard. 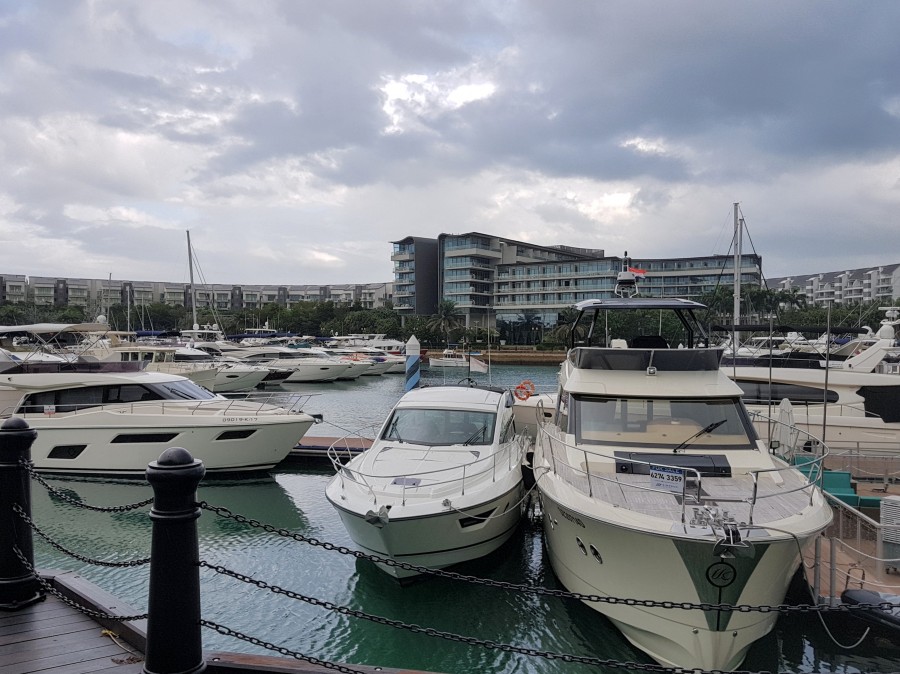 The view at the One 15 Marina Club

After the Captain/Skipper, Freddie, met us, he asked us to load our belongings onto a Club Buggy, before leading us to walk along the Marina's boardwalk towards the yacht by White Sails. We were told to remove our shoes before boarding the yacht, and the crew packed all of them into a big plastic bag, while we settled ourselves at the back of the yacht.

The captain/skipper introduced his crew, gave us a quick safety briefing, and pointed to us some of the facilities on board the yacht (a dining table that we sat at for the briefing, 2 cabins and 2 toilets with bathrooms on both sides, a microwave oven and an audio system in front of the dining table, an ice storage box at the back of the yacht, 3 kayaks outside).

First impression wise, it was "Wow", "Cool", "Nice", "So fun", "looks luxurious", though that was one of the smaller yachts as compared to those that were opened for viewing during the ONE°15 Marina Club Open House during the September School Holidays, but it was a cozy option for a group of 8 pax. The interior of the yacht was too cramped for my liking, however, I liked the outdoor space of the yacht, both the front and back, where I could enjoy the breeze, fresh air and views. The whole idea of a yacht cruise was definitely welcoming, refreshing and thrilling for all of us, most of whom are first-timers on such a personalized Yacht Charter. Group photo on board the back of the yacht

The children were all seated at the front of the yacht on the 30-minutes journey from Sentosa Cove to Lazarus Island, enjoying the breeze, taking in the views, pointing out to some of the iconic landmarks and cruises that they spotted along the way. They loved the netted area where they could lie face down and watch the moving waters below them, squealing now and then when they got wet with splashes of water as the yacht went over the choppy sea at some points. As they got more confident, they started to roam around the front of the yacht (holding on to railings at all times), climbing up and standing at a higher point for greater thrills and pose for photos. They also realized they could sit in front of the bow on both sides, sticking their legs out to the open sea, for more photos. Seated at the netted area at the front of yacht

On nearing Lazarus Island, the crew pointed out to us Kusu Island on our right side, before St. John's Island, which is connected to Lazarus Island in front of us. White Sails team wanted to give our family a more adventurous and fun time than just docking at Lazarus Island pier, so the yacht was anchored at Eagle Bay (normally they charge additional $50 for going to Eagle Bay being fuel surcharge), from which we were supposed to kayak to reach the shores.

We were briefed that we could go swimming, kayaking or play on the giant float that was just put out onto the sea at the back of the yacht. We were instructed to put on life vests and to put out our towels on the seats at the back, before getting into the waters, so that we can dry ourselves before entering the yacht at the end of the wet activities. My mother (non-swimmer and 71 y.o. elderly) and sister-in-law (did not bring extra clothes) decided to stay on the yacht, while the children had a whale of time at Eagle Bay and Lazarus Island for 2 hours.

Keziah and Megan buried Geralyn's lower body in the beautiful soft white sand (something that we do not get on our mainland beaches) and shaped the sand around her legs into a mermaid tail.

Megan and Keziah started to use the kayak paddle oar as their spade to dig a big pit in the sand. After finishing the canned drinks, they brought Geralyn along to use the empty cans to collect sea water to fill up the pit. Sharilyn and Abel followed suit too to dig another pit nearer the sea. Daddy went into the sea to scoop up wet sand to make a sand ball and built a mini sandcastle. Kids having fun at the beach

On seeing Daddy in the sea, Skyler, who had been crying before, ran forward excitedly and threw the two small pieces of white bread into the sea (he probably thought he was feeding the fish, as he just did for the first time at the Animal Resort on Sunday) and started to play happily in the sea and on the beach, going into Abel's "swimming pool" as well. 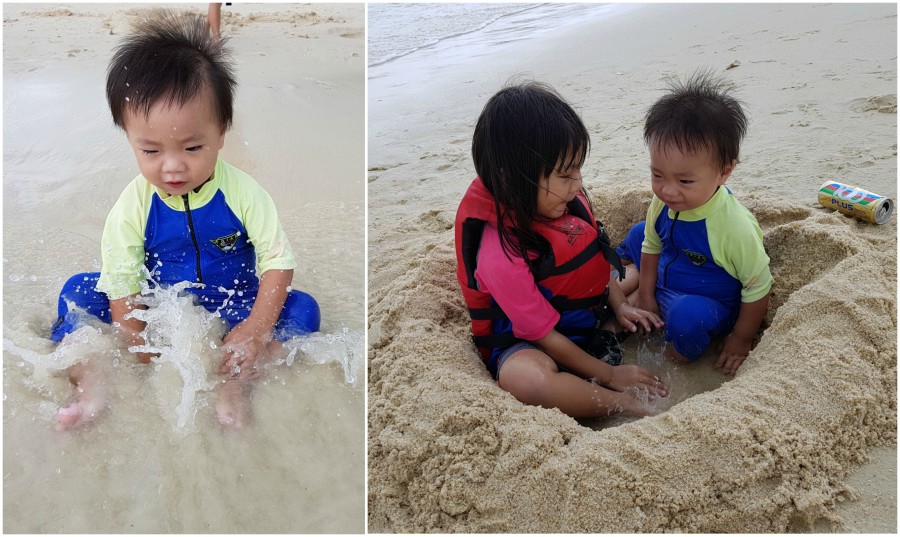 Just then, a dark cloud passed by and big raindrops started falling, as we made our way towards a nearby pavilion to seek shelter for the time being and we took a few group photos on a buggy parked in the pavilion while waiting for the light shower to stop. When the sky cleared, they dashed out to play again. 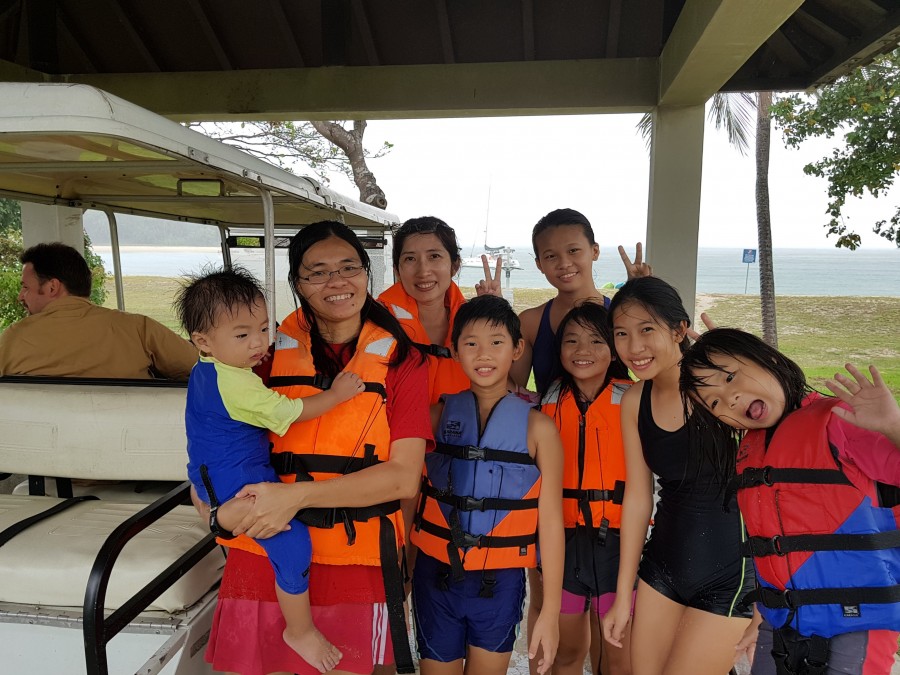 Group Photo when taking shelter from the passing cloud

The group of 6 enjoyed themselves thoroughly till 4.20 p.m., when I got them to get up the yacht. The crew handed us a shower hose to rinse off all the sand, before we dried ourselves with the towels then entered the toilets to change. The crew and skipper pulled up the float and 3 kayaks, washed them and put them back at the sides of the yacht, before we set sail back to Sentosa Cove at 5.00 p.m. We arrived back at ONE°15 Marina Club at 5.30 p.m. While the crew was handing us back our shoes and slippers as we were disembarking from the yacht with our belongings, we noticed that a storm was approaching. We thanked and exchanged quick goodbyes with the Captain/Skipper and crew, before the group walked with quick paces back to the security gate (we were given instructions how to get out on our own, as they stayed to wash up and pack the yacht for the next charter) and got back to the sheltered area outside 7-11 (our meeting point) just before it poured heavily. Aren't we lucky that the weather held out for us as we enjoyed the entire 4-hours yacht charter without any early cancellations that would otherwise spoil the enjoyment mood?

As a parent, I definitely like this Yacht Cruise to Lazarus Island, as it was a place that I have wanted to bring the kids to since news of it being opened to public was announced, but have not done so due to the baby being born. I also liked the outdoor activities that the kids could enjoy on the Lazarus Island. Would have joined them on a roundabout kayaking stint and take a relaxing rest on the float, if I was without the wriggling Skyler. As a parent, seeing the happy faces, great smiles and laughter from the kids, tells me that they have enjoyed themselves tremendously and that's the most rewarding thing for me. 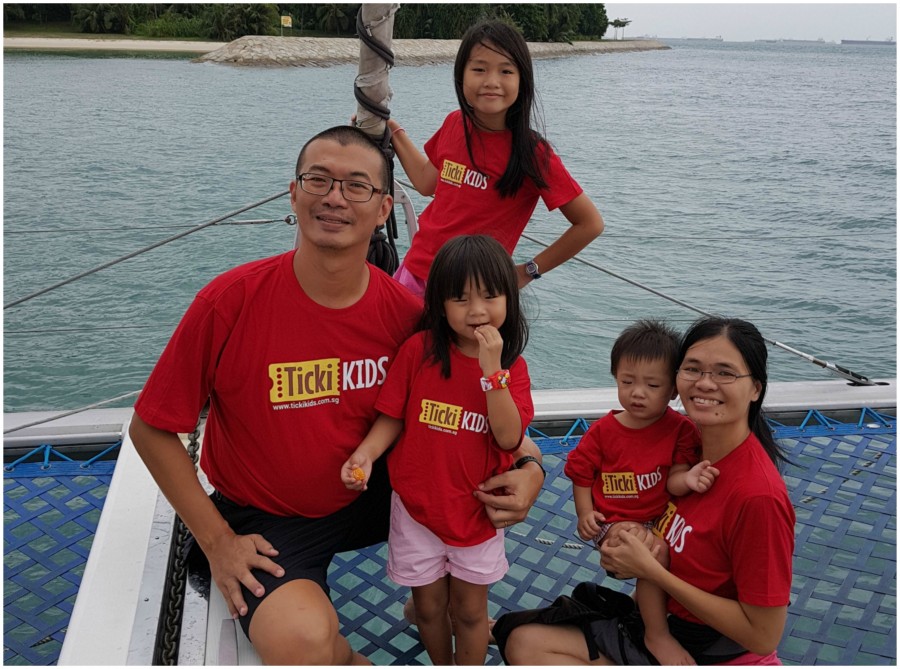 If you would like to include kayaking from Eagle Bay to Lazarus Island in your cruise, note that having little kids on board means ferrying them to and fro with only 3 kayaks that the yacht has, which might be quite challenging. Also, if you are planning to have elderly people on the cruise, docking at Lazarus Island pier might be better idea than kayaking to the shore from Eagle Bay.
Also note that Lazarus Island is just a tiny stretch of beach without any food outlets. Food and drinks can be catered separately with White Sails, with prior arrangements and at extra costs. If you do not cater with White Sails, you are required to bring your own food and drinks, including cutlery. You have to bring your own ice (which can be bought at Cold Storage or 7-11 Store at Sentosa Cove Village, just beside the car park) to chill your drinks in the icebox provided on-board. Other things that you need to bring are own towels, toiletries, swimwear, extra set of clothes, and bait if you want to do fun fishing off the pier.

Learn More About the Cruise