We arrived at Singapore Science Centre and Mr Hide Iwasaki was prompt to attend to us, to deliver the admission tickets to us and to lead us to the DNA Lab near the entrance. The event started with Workshop Introduction and the Introduction to Euglena by Dr. Kengo Suzuki (10 minutes and 20 minutes respectively on the Sample Agenda). The organizers settled us in at our designated table, with our assigned laboratory assistant and informed us that the information on Euglena could be also found in the set of notes provided, so it facilitated following the topic.

The DNA Lab looked like a professional science laboratory, with all the participants (children and adults) seated at 3 out of the 4 laboratory tables, equipped with 2 microscopes each. The presenter was showing the "Workshop Timeline" and explaining about "How to be Euglena Researcher", using the presentation slides on the projector, so it again gave the feel of real learning going to take place in the 2 - hours workshop. 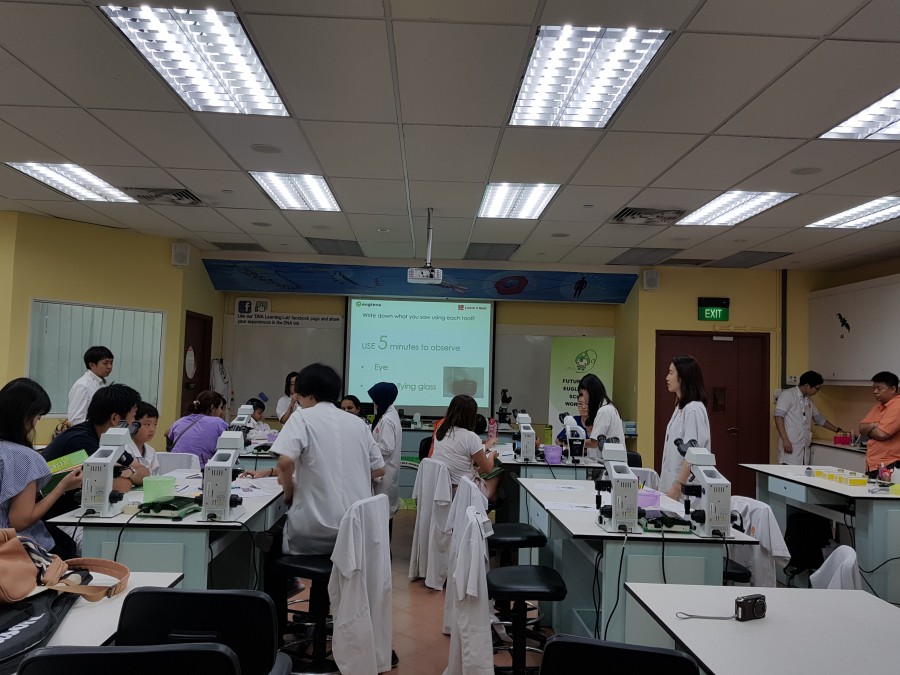 “Everyone in the room also donned the white laboratory coat with the orange Singapore Science Centre logo, so it truly looked like a professional Science Workshop was in place!”

The place itself was decorated a bit unusual for children.

“It was a little creepy to Aerilynn, as she saw that there were algae growing on the trees, which is not what she expected.”

“Masoon was also somewhat tensed at the beginning but I personally was surprised.” 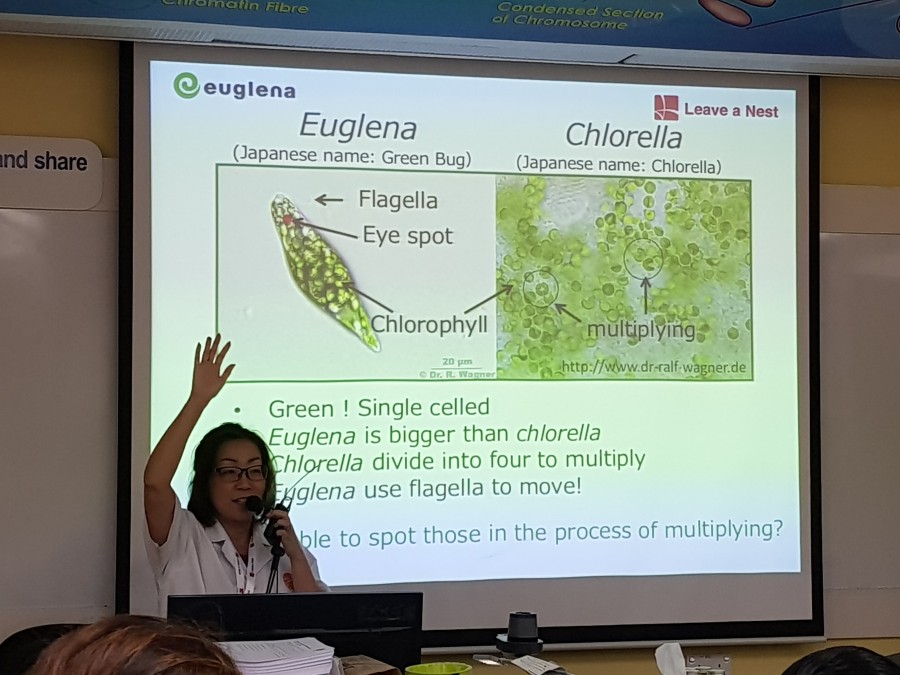 The room wasn’t too crowded at the session, as the free workshop is limited to only 20 families per timeslot.

The children started off with "How to be Euglena Researcher" , after the 5 steps, Observation, Question, Test, Record, Share, were briefed to them. They had to observe a Euglena sample in a cuvette with, first, their eyes (only see a greenish colouration of the liquid), then with a magnifying glass (green particles seen). Next, they observed a mounted specimen of another algae under the microscope. The children were amazed to see a "net-like" structure of the algae, with a thicker, dark green cell wall.

They then moved on to prepare their own slides with the Euglena sample given in the cuvette, for observation under the microscope.

For those who failed to observe anything (like ours), they re-prepared their slides again. This time, we managed to observe a cluster of single cells close to one another (which the laboratory assistant told us that it was rare for the single-celled Euglena to cluster together). We even had great fun attempting to capture the cells seen over the microscope on our camera (not an easy feat though). Shrills of excitement were heard when we observed that our Euglena were active and moving! 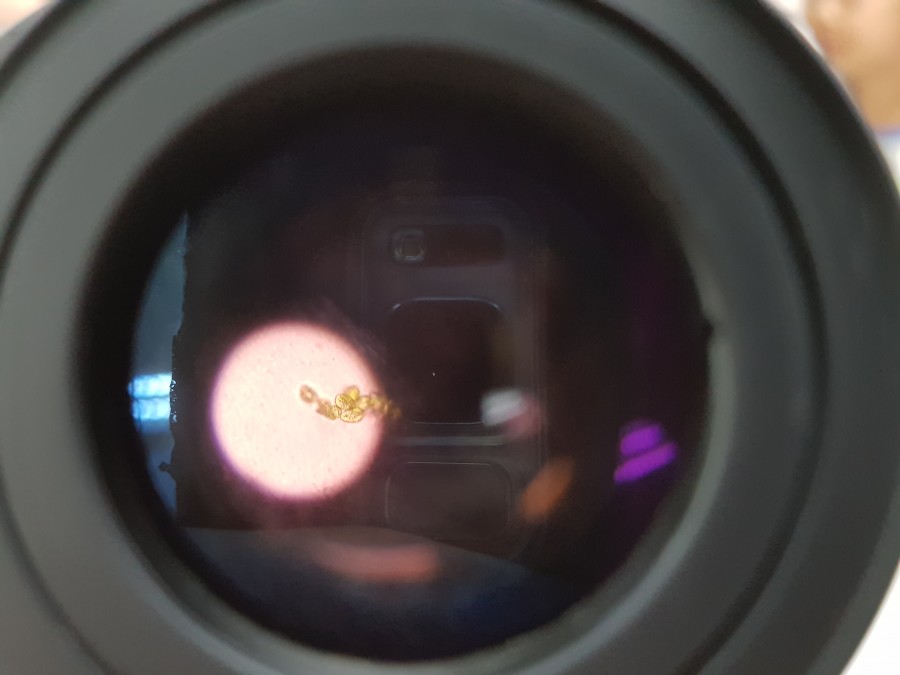 Participants were then told that what they have observed was another algae Chlorella, and the similarities and differences from Euglena were compared, before a video of the movement (and hence, change in shape) of Euglena was shown. Kids were then shown the use of Euglena in various food items and asked if they would taste a sample of Euglena in a "juice" directly. This was followed with a food tasting session - eating of Euglena cookies outside the DNA Lab.

After introducing Euglena as food, Euglena was also introduced as a biofuel. An Euglena candle was lighted at each table, and the lights in the room were dimmed to show the brightness of the candle flame. More "wow"s came from all participants (parents included) when it was shared that Euglena was already used as a biofuel (called deusel) in biofuel buses that are already running in Kanagawa, Japan. In the last segment as an Euglena researcher, the children brainstormed about the various products that Euglena may be used in, and how they can convince others to try out or accept the Euglena products, before they shared their ideas with the entire group.

Next on agenda was a sharing session "Exciting world of algae through SEA researcher's eye" by Ms. Marshila Kaha. She shared about her research project, in the use of the high amount of waste from Palm Oil Plant, to extract asthaxanthin for potential use as a food supplement or in cosmetics.

After the Final Message for the entire workshop, Dr. Kengo was invited to sign and present the Euglena Young Scientist certificate to the youngest participant in the group, while the other children's certificates were signed and presented by their respective laboratory assistants.

All participants filled up a Workshop questionnaire on Future Food Euglena, while the laboratory assistants handed out a box of Euglena cookies and two sample packs of Euglena drink to all participants as a take-home souvenir. They also highlighted that there is a Euglena Waffle recipe inside the set of notes and that we could try it out at home. 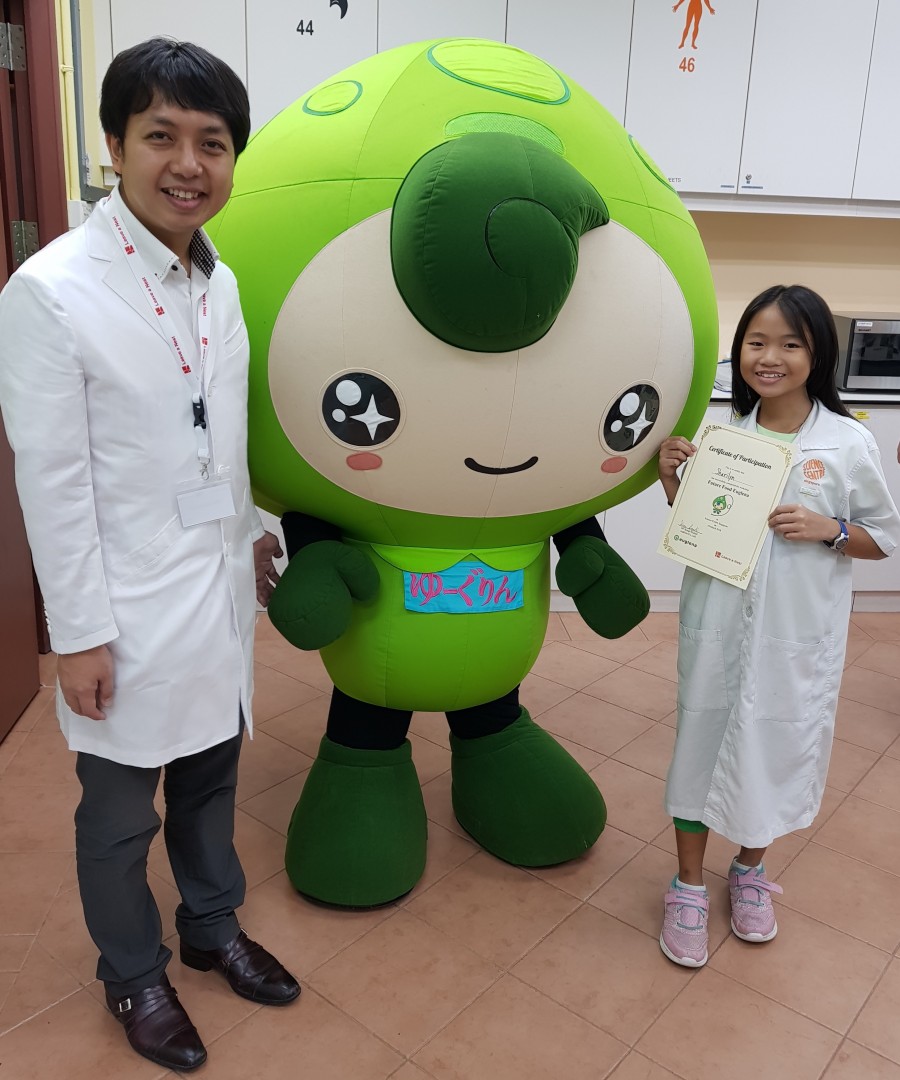 With Dr Kengo Suzuki and the brand mascot

The finale, which the children were excited about too, was the appearance of Eugreen, the brand mascot, for photo opportunities, individually, or with their parents or laboratory assistants. A group photo was then taken, before the participants thanked the team for a wonderful Science Workshop experience, before making their way out of the DNA Lab.

As a parent, I liked the way "How to be Euglena Researcher" was carried out, in a systematic manner, in which a new "discovery" was unfolded at each stage. For example, they were told that what they observed under the microscopes were other species of algae from Singapore, not Euglena from Japan, only after their observations. This taught the children that as a researcher, they need to observe and question, and not to just accept any information given to them.

I was also curious about the potential of the use of Euglena both as a food and as fuel, so I was equally eager to taste the Euglena cookies and to watch the Euglena candle being lighted up. Was even more amazed on hearing about Deusel being used in the biofuel bus in Japan, and the potential biofuel jet flying from Japan to Singapore in the near future. 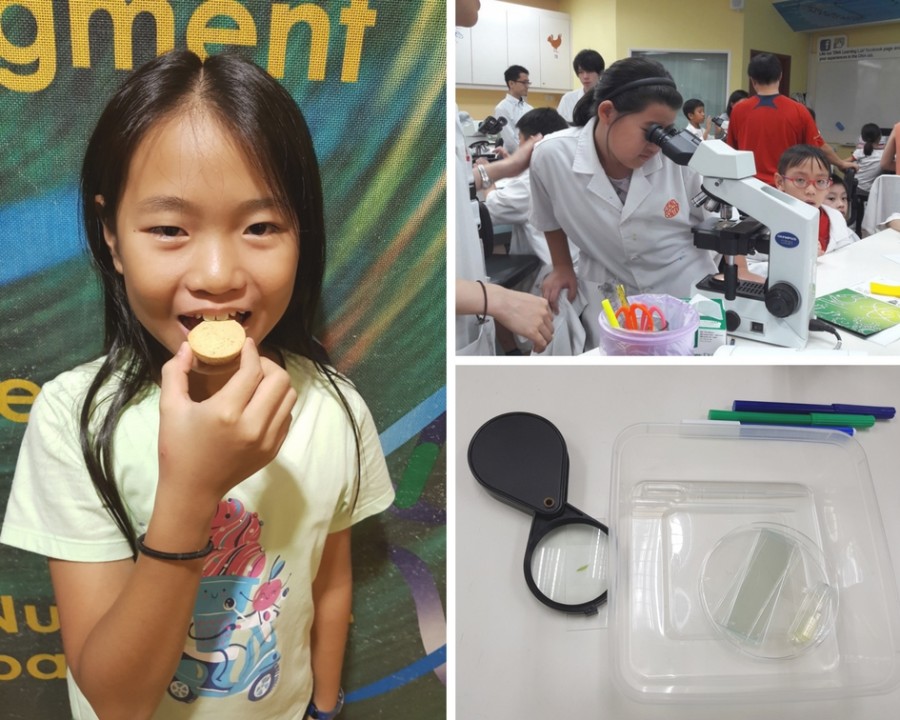 I like that the children are able to learn through hands-on activities, and the parents could join in too!

Parents were actively engaged in all the activities together with their kids. In addition, they had more questions for the laboratory assistants and were taking photos of their kids in action as well. This workshop was an eye-opener and new experience for some of the parents as well. 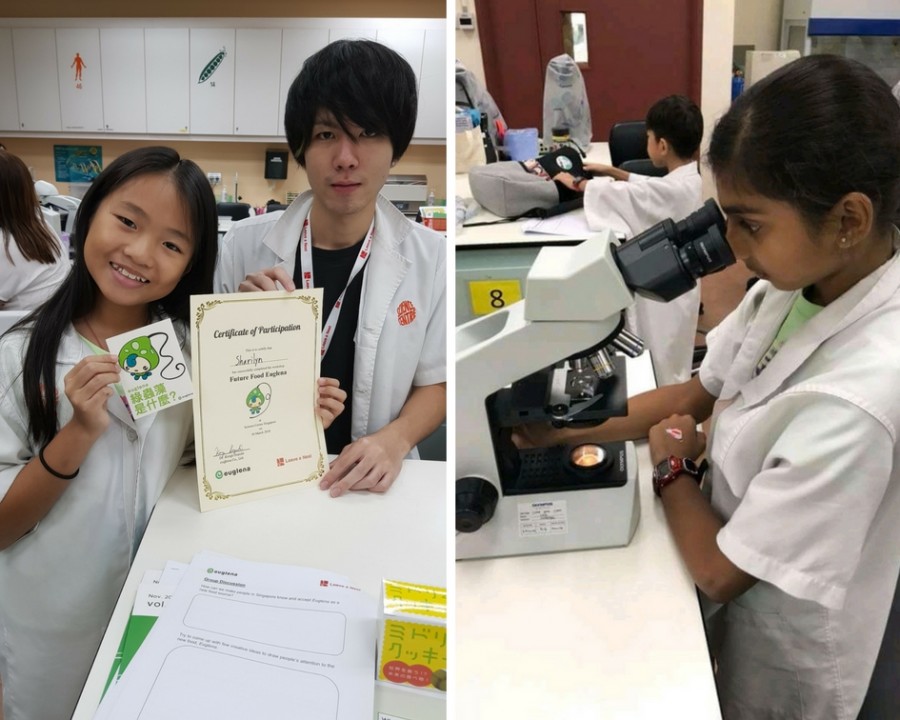 Sharilyn's favourite thing about the workshop was the preparation of the microscope slides and the observation of the algae sample under the microscope. Her excitement could not be contained when she saw the algae moving, as she shouted excitedly to the laboratory assistant and I to look through the microscope as well, to verify for her that the movement she saw was true and real, not imagined.

Masoon enjoyed looking through the microscope the most.

Seeing the organisms moving and she liked lighting up the euglena candle.

The entire one-hour session of "How to be Euglena researcher" was the "not-to-be missed" segment of the 2-hours workshop, where the children went through the 5 steps of what a researcher does (Observation, Question, Test, Record, Share) in a systematic and well-thought-through workshop flow.

At TickiKids we are all looking forward to more workshops from Euglena Co!

TickiKids team would like to thank Tay Mui Keng Selena, Joys Lin and Phoram Mehta for providing us with their impressions of the event.