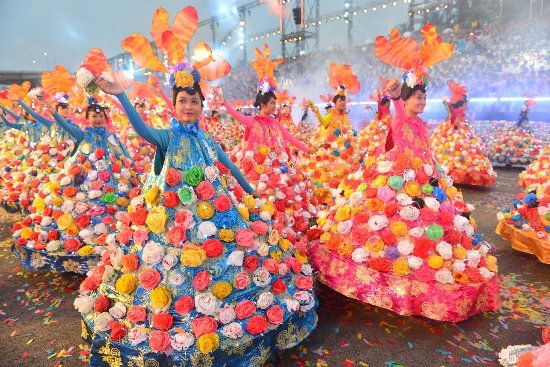 Vibrant floats, dancing dragons, prancing lions, wushu masters, performers of different races in their traditional costumes and many, many more...

This National Event is also the largest street performance and float parade in Asia. From the main parade site to the heartlands, this street extravaganza epitomises the dynamism of Singapore's vibrant and multicultural society.

The word Chingay is equivalent to the Mandarin zhuang yi (妆艺), which means "the art of costume and masquerade" in the Hokkien dialect.

The First Formal Chingay Parade in Singapore was mooted by the then-Prime Minister Lee Kuan Yew who was also the chairman of the People's Association (PA). Chingay, with all its noise and gaiety, would compensate for the ban on firecrackers, a customary New Year practice to drive away evil spirits.

For its first street parade on 4 February 1973, the PA teamed up with the Singapore National Pugilistic Federation for a grand show in the Year of the Ox, depicting aspects of Chinese culture – dragon and lion dances, martial arts and street opera.

In 1987, Chingay featured its first foreign group when the city's main English newspaper, The Straits Times, sponsored four pop singers from Tokyo. Since then, this signature event had extended invitations to international artistes and troupes.

Indeed, for the scores of spectators, the Chingay Parade could well be a treasured glimpse into the different cultures of Singapore and the world. Here age, race, language and creed are no barriers.