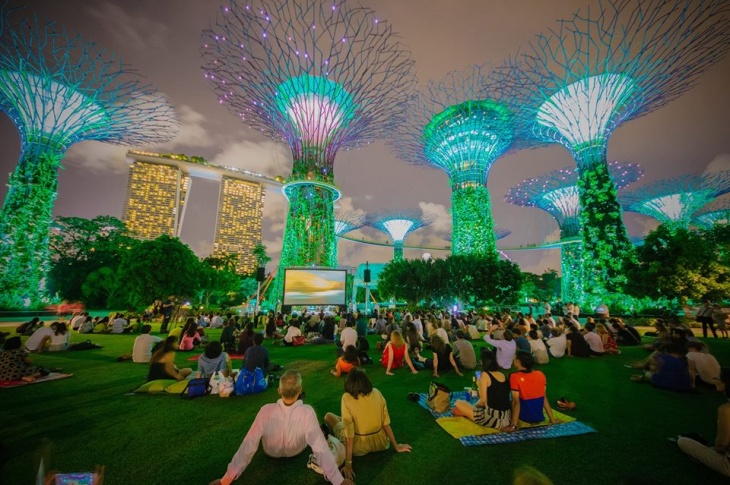 This October, Singapore International Film Festival - SGIFF partners with Gardens by the Bay to host two free outdoor screenings in the lead up to the film festival, as part of commitment to celebrate storytelling through cinema.

The inaugural Moonlight Cinema series begins with My Girl (USA, 1991) and My Girl (Thailand, 2003) – two coming-of-age films set in the time of childhood with the blossoming of first crushes. The films' soundtracks have also gained popularity and become part of the cultural fabric of their times.

Before the film screenings, talented dancers from Luminous Dance Academy will perform to the iconic soundtracks of the two films at 8:15pm - 8:30pm on both 26 & 27 Oct.

A girl on the brink of young womanhood struggles with changes in her family and herself.

A tender, funny story of an 11-year-old girl’s momentous and emotional summer of discovery--the summer of her first crush, her first kiss, and her first step on the path to growing up. Vada, a hypochondriac tomboy whose best friend is the shy Thomas J., lives in an eccentric household headed by her emotionally detached widower/mortician father, Harry. A change comes over the family after the appearance of a new woman, Shelly, who starts working for her father.

My Girl features career-best performances from young co-stars Anna Chlumsky, now known for TV’s Veep, and Macaulay Culkin, fresh off his Home Alone star turn. A box-office success during its first release, the film is a mature treatment of grief in between moments of whimsy.

A young man en route to the wedding of his first love reminisces about his childhood in 1980s Thailand.

As the children of rival barbers, Jeab (Charlie Trairat) and Noi-Naa (Focus Jirakul) grow up next to each other in small-town Thailand. After a traumatic accident keeps Jeab from venturing too far from home, he and Noi-Naa occupy themselves playing house with girls from the neighbourhood. As Jeab grows older, he longs for more masculine companionship. He makes friends with a ragtag group of boys who demand he sever his ties with Noi-Naa to join them. Fast forward many years, and now Noi-Naa is getting married...

The debut feature of a group of six Thai filmmakers who met in university, My Girl was the top domestic film at Thailand’s box office in 2003, grossing over 140 million baht. It is regarded as a cult hit, as is its soundtrack, which featured 1980s Thai pop music.

Moonlight Cinema is brought to you with the support of U.S. Embassy Singapore.

Image Credit: Gardens By The Bay