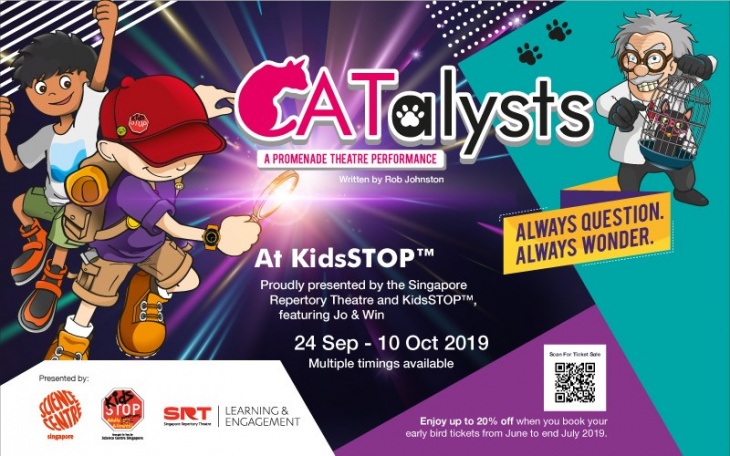 Can Jo and Win, her best friends save her from the cantankerous Dr FeelBad?

Let’s go on a thrilling adventure with Jo and Win by rocket, train, and even dinosaur, as they rescue Madame Curie, cheer Dr FeelBad up, and explore science in this interactive headset promenade theatre experience where the audience interacts and physically move together with the actors from one scene to the next ‘Catalysts’!

Brought to you by Singapore Repertory Theatre and KidsSTOP!

The nearest MRT station is Jurong East Station, which is on both the East-West Line and the North-South Line. From there, you can transfer to bus 66 or 335, or take a short walk to the Science Centre.  KidsSTOP is located next to Science Centre.

KidsSTOP is just an 8-minute walk from the Jurong East Bus Interchange/MRT Station:
-  Take the covered walkway from the interchange towards Jurong East St 13.
-  Cross the street and continue in the same direction, along Block 135.
-  Keep going in the same direction until you reach a road intersection.
-  KidsSTOP is located next to Science Centre building which is diagonally accross that intersection.