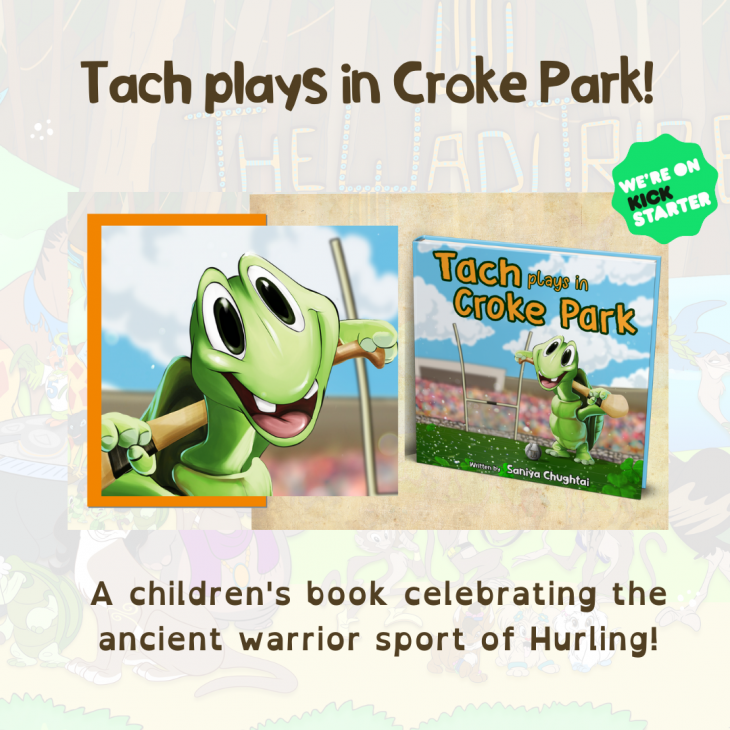 Tach plays in Croke Park is the first pre-schooler (4 years plus) book about Tach, published by The Wadi Tribe Publishing House. This is a series which focuses on key social and emotional learning values that a child can face at a young age.

Tackling BIG emotions for kids through entertainment is the best form of education. Tach is an adorable wee little turtle that kids can learn from through edutainment!

This is Saniya Chughtai, an Irish-Pakistani author's 8th book.

Besides being a fun read, the story demonstrates the benefits sports have on a kid’s mental well-being.

Tach was originally featured in a book for 6yrs plus, titled Tach and the Cosanthor. Based on its success and the demand to write for a younger age group, Tach plays in Croke Park was conceptualised. Why Croke Park? Where else would Tach play his first ever historic match? Croke Park is part of the cultural fabric of Irish games and of course it is one of the biggest stadiums in the world where the ancient warrior sport of Hurling is played!

Tach the hurler has the best fans in the world who call themselves The Wadians.

Tach is a wee little turtle who lives in a far away land called WadiLand. He is part of The Wadi Tribe and lives with his mom. He loves to play with his best friends Turwa and Kaw. When he is not with friends he is often swimming in his pond and drinking his favourite kale juice.

Did I mention that he daydreams A LOT? His daydreaming has gotten him into trouble many times, which have turned into scary, magical and fun adventures!

Back this project on Kickstarter and pre-order your copy of this amazing story! There are a lot of great free prizes available exclusively on Kickstarter till 9th August, 2021.

Tach plays in Croke Park is:

When you back the project your name will automatically go into a competition draw to WIN ANY of the previous books from The Wadi Tribe.