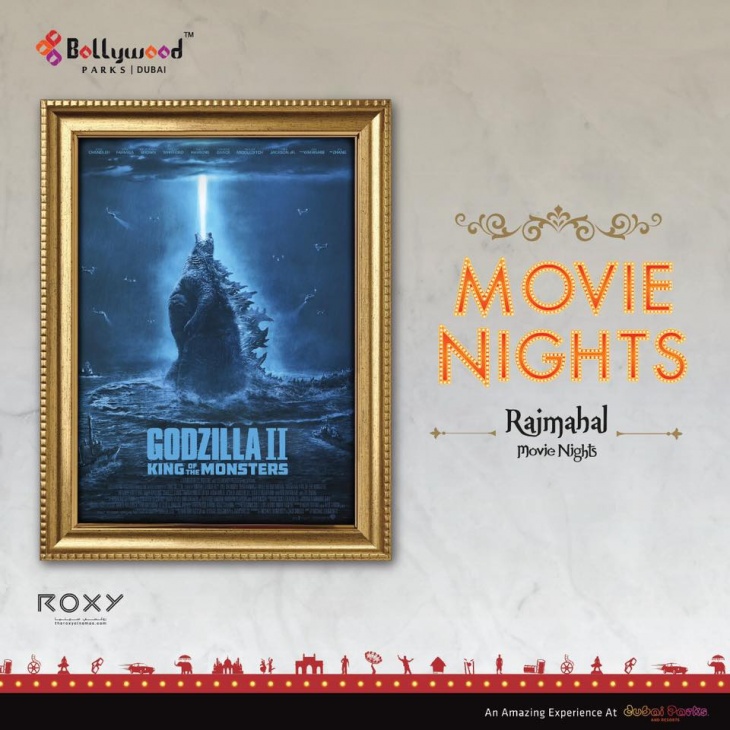 Join us to watch the special screening for Godzilla II after enjoying a delicious open buffet at Mughal E Azam restaurant on Thursday and Friday, May 30 & 31 at 10PM inside the Rajmahal Theater at Bollywood Parks Dubai.

The new story follows the heroic efforts of the crypto-zoological agency Monarch as its members face off against a battery of god-sized monsters, including the mighty Godzilla, who collides with Mothra, Rodan, and his ultimate nemesis, the three-headed King Ghidorah. When these ancient super-species - thought to be mere myths - rise again, they all vie for supremacy, leaving humanity's very existence hanging in the balance.

Movie is rated PG-13: Parents Strongly Cautioned – some material may be inappropriate for children under 13.

Enjoy access to Bollywood Parks™ Dubai, Open Buffet & a screening of Godzilla II: King of the Monsters for just AED60.

Get your tickets here.

Even if you are a first time driver in Dubai, you will have no problem reaching Dubai Parks and Resorts. From Downtown Dubai, you head south of Sheikh Zayed Road, past Dubai Marina and Jebel Ali, till you see us on the left side of the road. The journey shouldn’t take more than 40 minutes.

Take the red metro line south all the way to the end station Jebel Ali.

From there on, take a taxi for the short remaining distance to Dubai Parks and Resorts.

From Dubai International Airport:
With taxi or car, head south on E11, also known as Sheikh Zayed Road, towards Abu Dhabi. Dubai Parks and Resorts are located past the area Jebel Ali on the left side, and the journey should take around 45 minutes if there’s not too much traffic.

Dubai Parks and Resorts is in close proximity to this new airport. Take the Sheikh Mohammed Bin Zayed Road south before turning right towards E11 where you will take right again, towards Dubai. The Parks will appear almost immediately on the right side of the road, and the journey shouldn’t take more than 20 minutes.