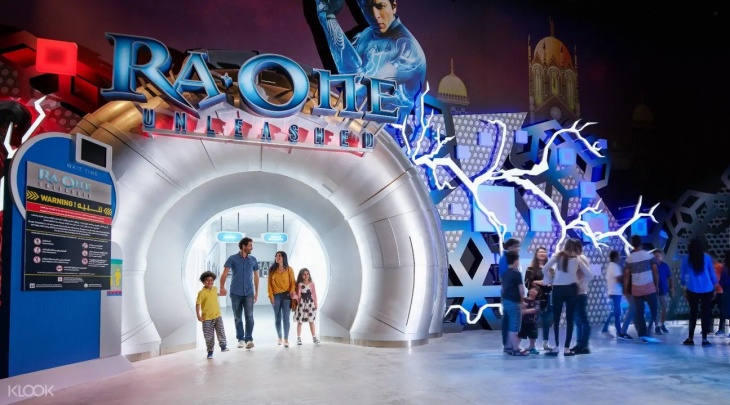 Explore the five movie-set zones of rides and shows at your leisure, featuring famous Bollywood films.

Take a ride where you chase Don himself through the streets of Dubai via an immersive media tunnel.

Join Bhuvan and the Champaner team in defeating the British Raj in a once-in-a-lifetime cricket match.

Fly over India’s landmarks at the ‘Krrish’ 4D theater and watch classic song and dance shows all over the park!

Bollywood Parks in Dubai is the ultimate destination for Bollywood fans around the world. The biggest movies to ever have been released are celebrated, experienced, and more here in this thrilling theme park. Get a ticket to Bollywood Parks by itself or pick a 1 Day 2 Park bundle that also gives you a ticket to Motiongate Park, Legoland Dubai, and Legoland Water park. Bollywood Parks Dubai allows you to live out for biggest Bollywood dreams by stepping into the world of its most famed movies. Enjoy Lagaan: The Thrill of Victory when you join Bhuvan and his victorious cricket team in defeating the English team. Bringing the kids with you? Lagaan: Champner Cricket Carnival has great rides for them to try, with a cricket-themed ferris wheel and carousel. But where would Bollywood be without all the singing and dancing?See Crossroads at Bollywood Parks Remixed for modern dancing performances, Rangmanch, the open air venue for thematic village song and dance, and Stars of Steps for the biggest all-out Bollywood song and dance show! Trains are also a constant feature in Bollywood, do don't miss the Mumbai Express, where the performers dance atop a train roof. Dining experiences are also available within the park, with Mughal-e-Azam, an Indian restaurant serving the sumptuous meals as you sit in the lavish surroundings that call to mind the Mughal Kings. Get yourself a day in the world of Bollywood that you won't forget.

Even if you are a first time driver in Dubai, you will have no problem reaching Dubai Parks and Resorts. From Downtown Dubai, you head south of Sheikh Zayed Road, past Dubai Marina and Jebel Ali, till you see us on the left side of the road. The journey shouldn’t take more than 40 minutes.

Take the red metro line south all the way to the end station Jebel Ali.

From there on, take a taxi for the short remaining distance to Dubai Parks and Resorts.

From Dubai International Airport:
With taxi or car, head south on E11, also known as Sheikh Zayed Road, towards Abu Dhabi. Dubai Parks and Resorts are located past the area Jebel Ali on the left side, and the journey should take around 45 minutes if there’s not too much traffic.

Dubai Parks and Resorts is in close proximity to this new airport. Take the Sheikh Mohammed Bin Zayed Road south before turning right towards E11 where you will take right again, towards Dubai. The Parks will appear almost immediately on the right side of the road, and the journey shouldn’t take more than 20 minutes.