Koko the Great by PLAYtime! 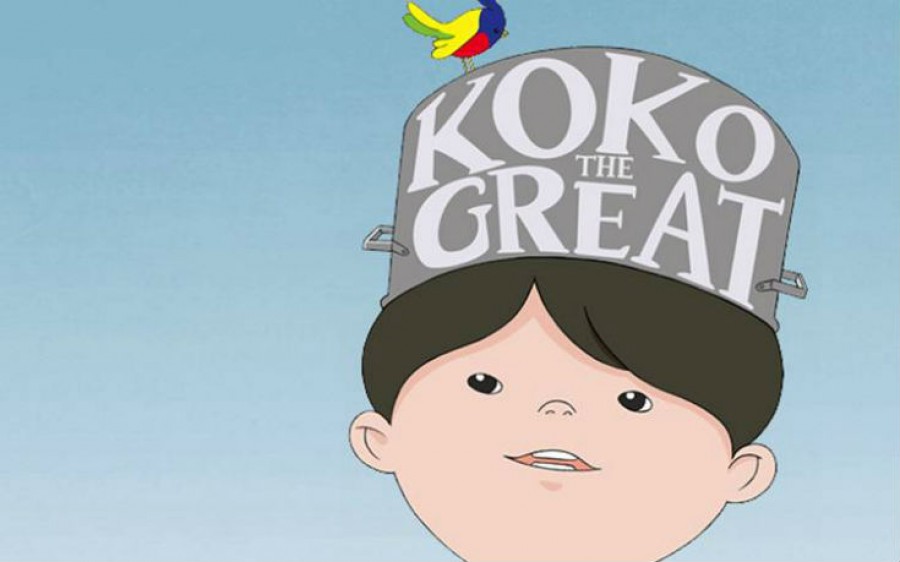 August 10-11 TickiKids Test Patrol parents took their kids to check out Koko the Great, a new theatrical production for children from Esplanade’s PLAYtime interactive theatre series. This terrific adventure story was adapted from Natalie Hennedige’s book of the same name, which was, in its turn, inspired by Singaporean artist Liu Kang’s oil painting, Life by the River. The production is all about sing-alongs, dance-alongs, surprises and good old kampong feeling.

The performance was held at Esplanade Theatre Studio. The venue was hushed and quite exciting as parents with children gathered around the center stage. There was a little hut in the centre and the kids were excited not knowing what was coming next!

The props were beautifully made - colorful printed squares of fabric that was modeled after batik designs adorned the props, including the puppets and the outfits and headgear the actors were wearing. The lights and the music set the tone perfectly for the story by the great river. 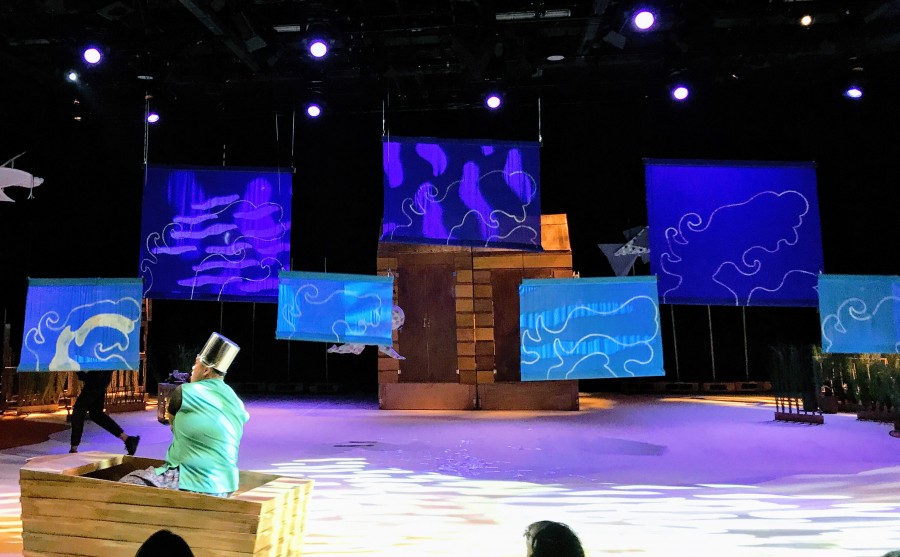 The stage / seating area was three sided and the actors covered the entire stage well making sure no part of the audience was left out, so there is no need to rush for the good seats even though it's free seating as all the seats are near the front and face the actors.

The show was fun filled, whimsical, and cheery. The storyline was easy to follow and peppered with simple songs, repetitive lines and interactive elements with simple activities, which were great for preschoolers to take part in. Actually, even one year olds danced along to the songs and were mesmerized by what was happening at the stage! 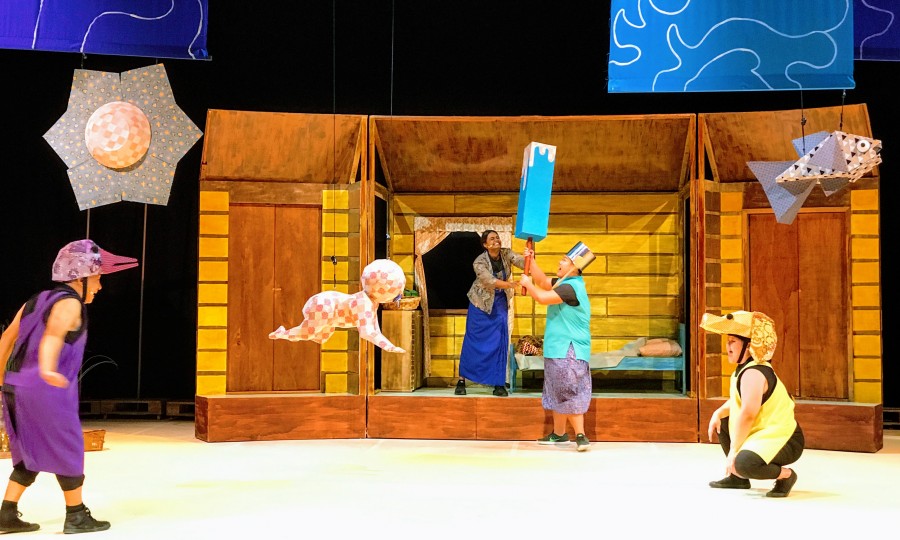 Here’s what our Test Patrol moms say about their kids’ favourite moments of the show:

"My 7 year old loved the props and how realistic they are. Especially the boat that moved around as Koko "rowed" it.

My 3 year old liked to go on the stage and keep the fishes (this was the interactive activity where the kids got to help sort the fishes and keep them in the correct basket).

My 1 year old enjoyed the songs and clapped and danced along. She also found the actors very engaging with their dramatized actions and would closely study their faces and expressions.

The actors put their heart and soul into the performance - even their singing was pitch perfect! The theme was cheery throughout and the sound and lighting effects weren't too scary for preschoolers and first time show participants. The interactive and participative elements helped to break up the 40 minute show and surprisingly my super active one year old sat transfixed through the performance!" 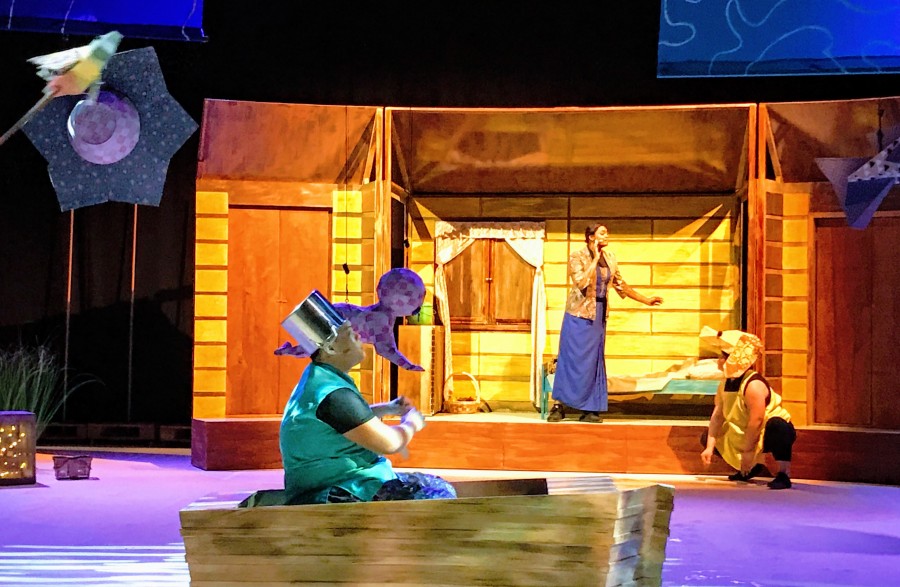 Kathy Margaret, mother of a five year old and a 15 month old:

"My five year old loved the show and asked me if we could visit the show again. The show was very kid centric simply because there were several actors who enthusiastically played the role of animals like the purple duck, the yellow dog and the cat. The show was also a bit interactive. That was my kids favourite part where the kids were invited to come on stage and help sort out the fishes for Koko and his friends. Both my kids loved going on stage and being a part of the drama. It also made them feel good to lend a helping hand to Koko and his animal friends. One more memorable part was when the giant tree which we thought was just a part of the decor started to move its branches, waving about as Koko imagined it to be a giant. That was a surprising turn of events. I also loved the songs sung by Koko and his mom which were lilting, memorable and soulful.

As a parent I enjoyed the show simply because it made my five year old smile and my 15 month old laugh when the animals quacked, barked and meowed. My 15 month old has never been to shows before but he was quite taken by Koko and his act. He even walked on stage to help with the fish and clapped his hand in glee when Koko sang his favourite giant song and stomped his feet. I also liked that the actors were very convincing and enthusiastic about their roles which clearly made the show stand out." 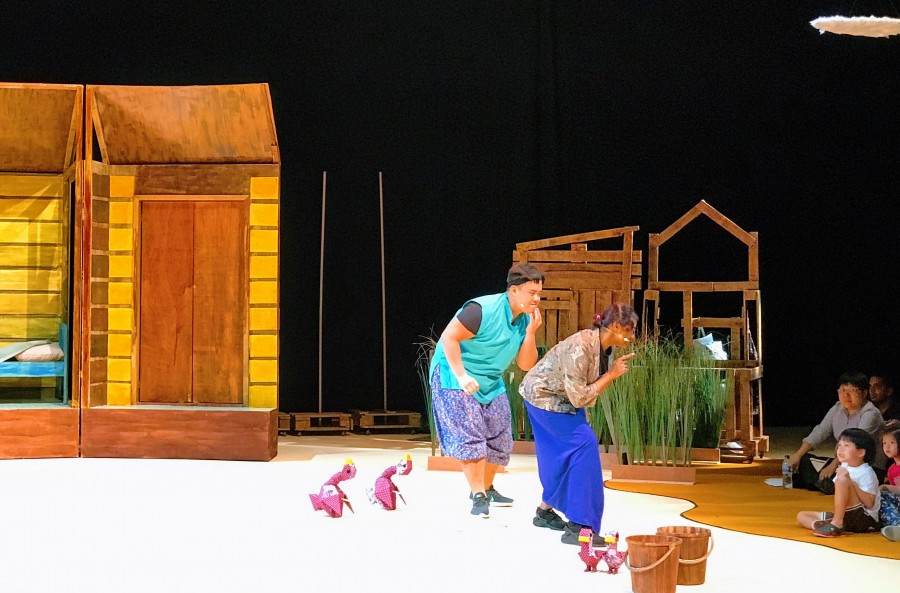 Ria Kartikariadi, mom of a 2 year and 9 month old:

"The interactive session caught my son attention. Singing together, categorizing the fish, and the props too!
The dialogues were not too long and not too hard to understand. Easy for me to explain to my kid. If your child is below 3 years old, you will probably still need to assist and explain somehow." 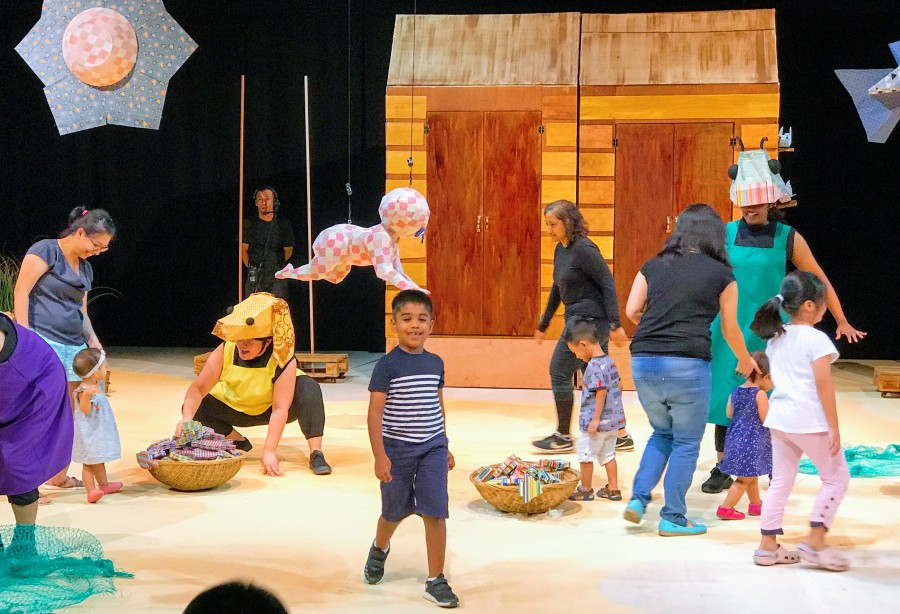 Parents also took part in the events. Before the show they spent some time creating a forest leaf colour craft that was fun and innovative (that activity wasn't part of PLAYtime, but a sneak preview for Octoburst! Children's Festival, which is going to take place at Esplanade on October 5-8). During the performance most parents took their little kids on stage to help sort out the fishes for Koko and his friends. For the rest of the show they could simply sit back and watch their kids enjoy the show!

Going to see Koko the Great sounds like a lovely way to have fun with your kids at the same time being a great opportunity to introduce your little ones to quality theatre! The play is recommended for children aged 2 to 4, however, as you could see from our Test Patrol moms’ experience, kids from 1 to 7 years old still enjoyed it.

The show runs from 11 August to 27 August 2017 and there will also be sensory-friendly version of the production on August 23 & 26, (Wednesday & Saturday). Sensory-friendly performances provide a welcoming and relaxed environment for children who are on the autism spectrum or have sensory sensitivities. 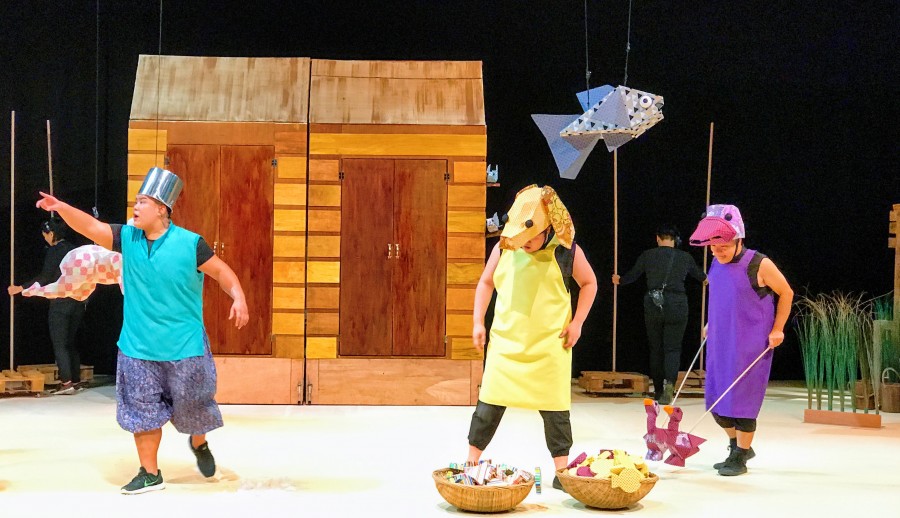 TickiKids’ tip to everyone visiting Esplanade Theatre Studio: In case your little one doesn’t like the atmosphere of the performance (it can happen, no matter how good the show is), it doesn’t mean that your day out is ruined. You can always go to PIP’s PLAYBox play area that has a collection of amazing childrens’ books by Singapore writers, arts and craft supplies and outdoor playground with a great view of the city and the theatre’s “durian” roof and enjoy a free session of play and craft work.

TickiKids team would like to thank Hui Min Goh, Kathy Margaret, Ria Kartikariadi for providing us with photos and their impressions of the performance.