Octoburst! A children’s Festival at Esplanade 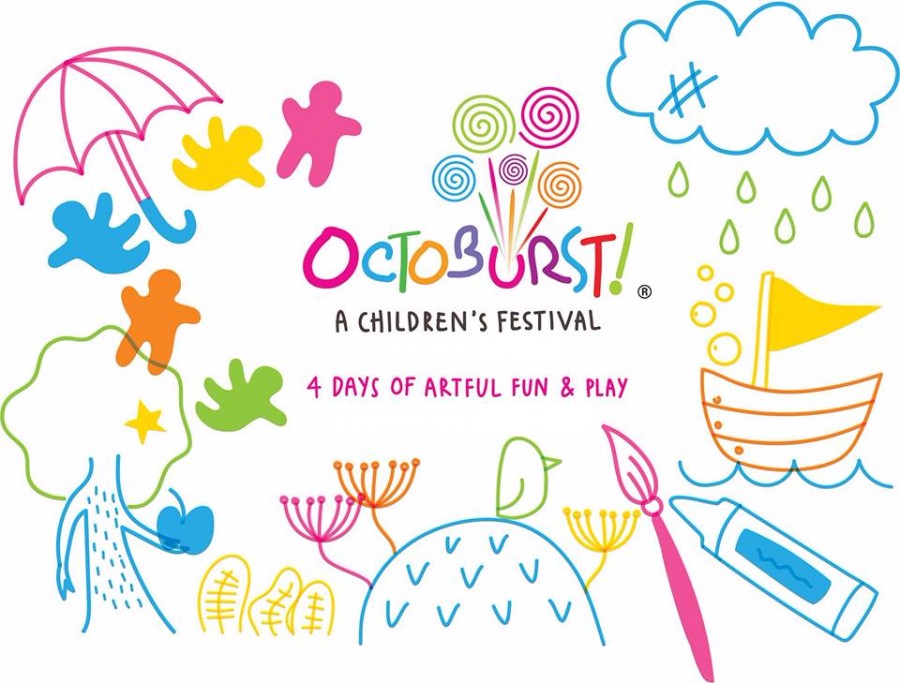 Meet our amazing Test Patrol mom, Selena Tay, who spent 2 days enjoying artful fun and play with her family at Esplanade’s Octoburst! Selena has kindly shared her impressions about the activities and shows of the festival.

With so many Children's Day events happening all over Singapore this year, I encouraged many mummies in various chat groups to bring their kids to Octoburst! for at least one of the days, as there is such a wide variety of activities that are suitable for children of various ages and interests. My two girls, Sharilyn (10 years old), Geralyn (4.5 years old) are also PIP's Club members and we do visit PIP's PLAYbox every now and then.

As we have been to the Free Programmes at Octoburst! annually, in the previous years, we were familiar with the various locations indicated on the website / on the Festival Guide. As usual, the areas for Free Programmes (especially the Esplanade Concourse) were bustling with activity as parents accompanied their children to queue for and participate in the various parent - child bonding activities. Free musical concerts in the area also drew big crowds of people to sit and even stand around to enjoy the performances.

As we had just been to the Theatre Studio for the Full Dress Rehearsal for The Magic Paintbrush, we were expecting the same cinema-like set-up. However, we were pleasantly surprised to see that the seats in the front part of the Theatre Studio have been pushed away, to create a Floor Seating Area with many square cushions arranged in neat rows on the floor, for the audience to sit on. 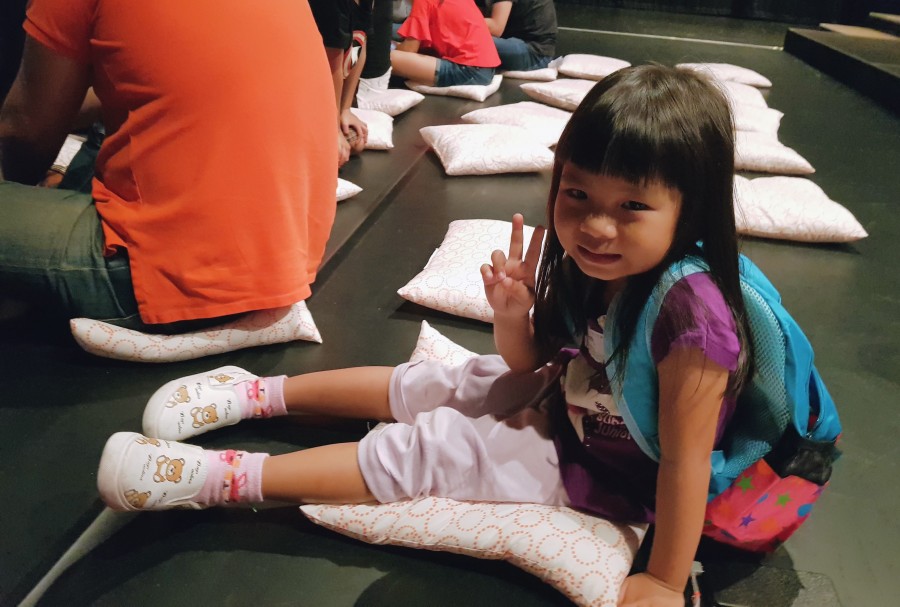 Geralyn went from one station to another, where the staff from Berries read each of the top 3 winning entries (from Children Chinese Picture Book Creation Contest in 2016) to a small group of 1 to 3 children at each station. 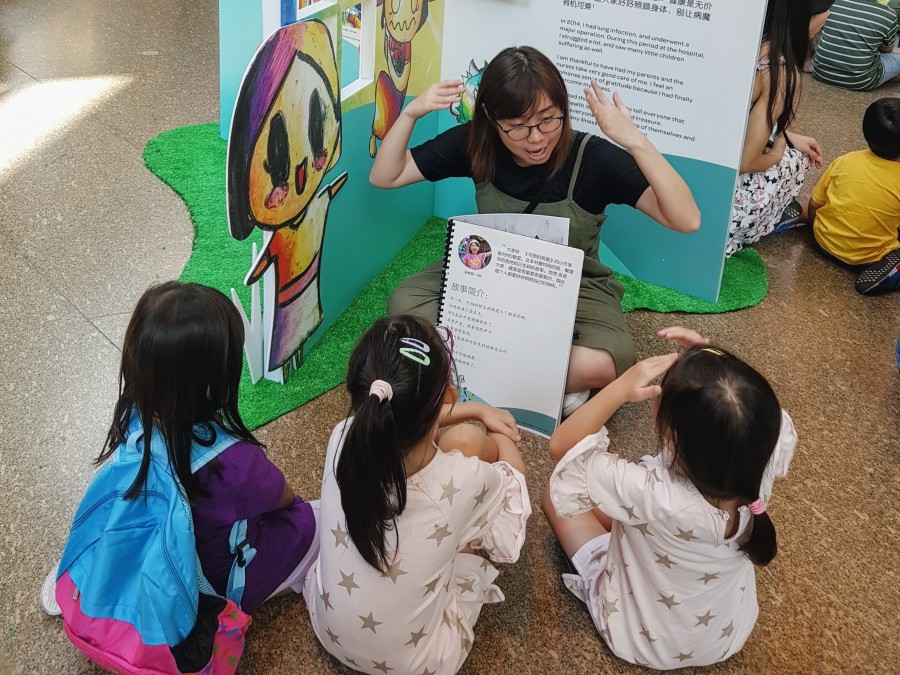 The children enjoyed looking at the illustrations in the big books used, and were able to answer the questions posed (with interactive activities like matching, story order / sequencing, etc.) after each of the short story-telling sessions.

We only had time to go to Section 2: Nature’s Creatures – Pin in PIP (before our ticketed show at 5 p.m.), whereby the children were provided with oil pastels to draw and colour on dried leaves from the trees of Singapore, then pin their leaves on a life-sized cotton-stuffed scarecrow in the form of Esplanade's beloved friend, the Playful, Imaginative, and Polite, PIP. She enjoyed colouring her dried leaf with rainbow colours, but she commented "Wouldn't PIP feel painful with so many pins poking him?"

When All Was Green at Esplanade Theatre Studio

Inspired by Shel Silverstein’s picture book “The Giving Tree”, When All Was Green is an award-winning puppetry play without words about mankind, nature and greed. Taking place on a set made of old books and recycled bindings, the story tells of the changing relationship between a boy and a tree as he grows up. As this was the first time that Geralyn was exposed to a performance without words, she took the first 5 minutes to adjust to it (with some "narration" from me about what was going on), before she could follow the flow of the rest of the puppet show. She was particularly fascinated by the fact that the tree could bend and move, and change its shape. Hers eyes sparkled and she gasped as she mouthed the words "flower", "fruit", "leaves" as she saw the flower blooming, a fruit growing on the tree and dropping off later, and the leaves falling off the branches. 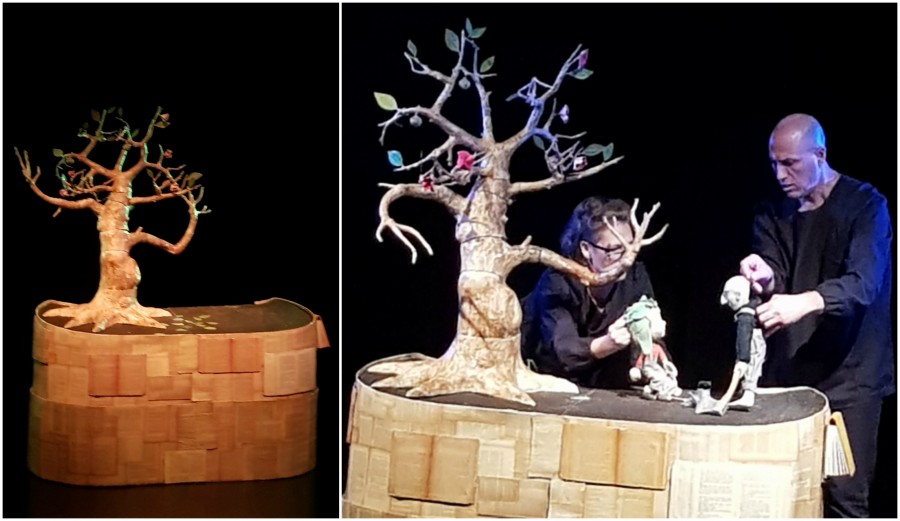 Geralyn enjoyed the show as well as the Meet & Greet Session with the Artists and their puppets at the end of the show, though she was a little sleepy by then (after skipping her afternoon nap). 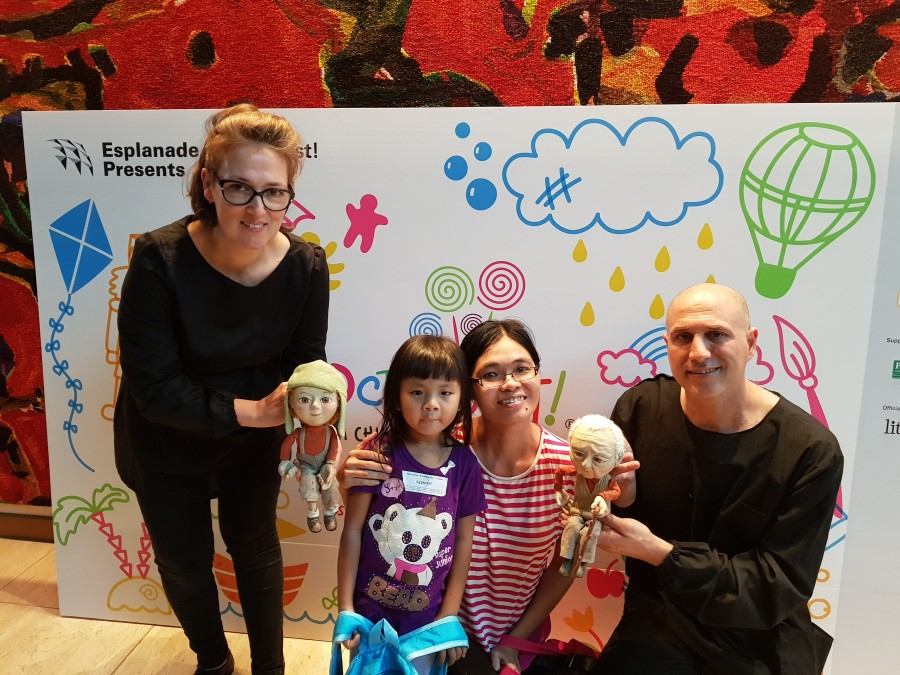 This free concert started at 7.15 p.m., and it was a real eye opener to the kids and adults alike to see the young girls performing on the harps (not a common musical instrument that the kids get a chance to see often) so beautifully. A soothing nice ending to a whole day's event at the Esplanade as well. 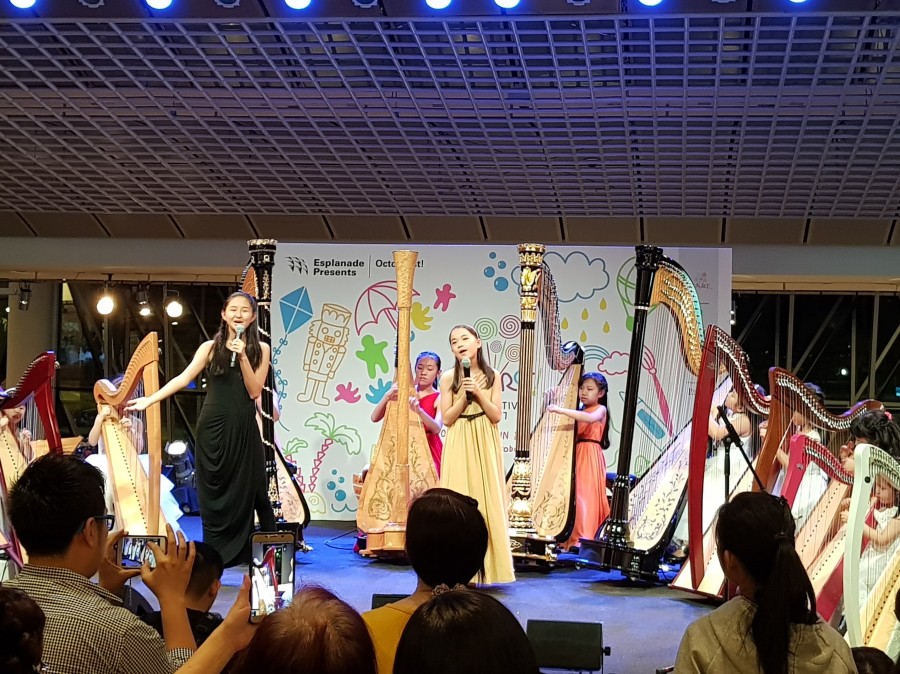 Grow A Garden at Esplanade Level 2 (outside Old School Delights)

Geralyn took the full 30 minutes session to design her bottle before potting her plant, while Sharilyn had to skip the "designing of the plastic bottle" part and move on to pot her plant and add water quickly, in order to be in time for the ticketed programme. This is not the first time that the girls have participated in such plant-growing activities, but they simply like it and would request at every opportunity, to let them take part in such activities. Hence, they really heaved a sigh of relief that they finally had an activity that they could take part in for the day (the rest were either outdoors with rain or fully booked).

Meera's Nature Adventure took her deep into the ocean, amongst the clouds and through a forest, and she meets different animals who are struggling to survive with the many problems our environment is facing. The performance taught the audience how they can help keep our world healthy and safe for our animal friends. Geralyn enjoyed the interaction between the performers and the audience. She said it was very funny as the performers said that the audience were the ones who threw the rubbish into the ocean.

Cloud Man was a 45-minute visual and theatrical treat featuring a blend of puppetry and storytelling in an intimate setting. This production told the story of Cloudia, who has always believed in the existence of Cloud Man - extremely rare creatures who live a quiet life high up in the sky. The audience were invited to join her on her journey to the very top of Cloud Mountain, a place where the views always bring surprises – and if you’re lucky, you might see something very special. 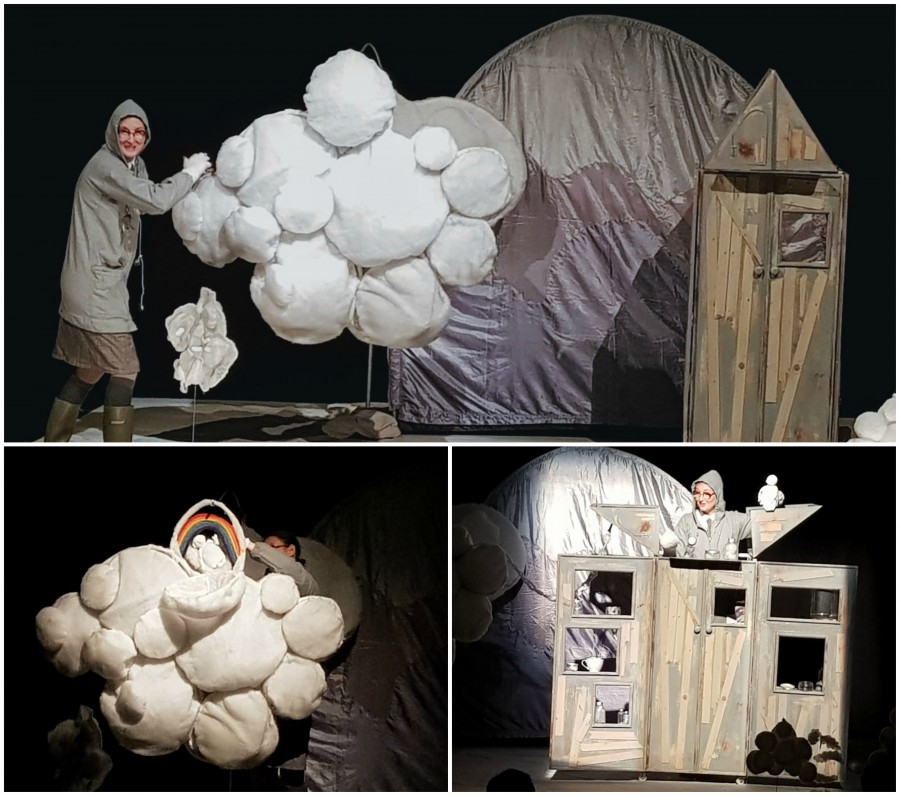 Sharilyn was pretty much interested in the props, trying to observe at close distance (from behind the line on the floor) what materials they were made from. She was amazed at how the wooden hut can be opened up from the side and top when Cloud Man went to different parts of the hut. She was also very keen to know what else was hidden in each of the "pouches" making up the biggest cloud, as they were being opened up to reveal what’s inside. She was particularly thrilled when a rainbow appeared in one of the "pouches" and eagerly asked me to snap a quick photo of the rainbow (despite photography being not allowed during the show). She also enjoyed the very brief Meet & Greet Session with the Artist, where she asked the artist about the materials used to make the Cloud Man Puppet and was allowed to hold and manipulate it while taking a photograph with the Artist. 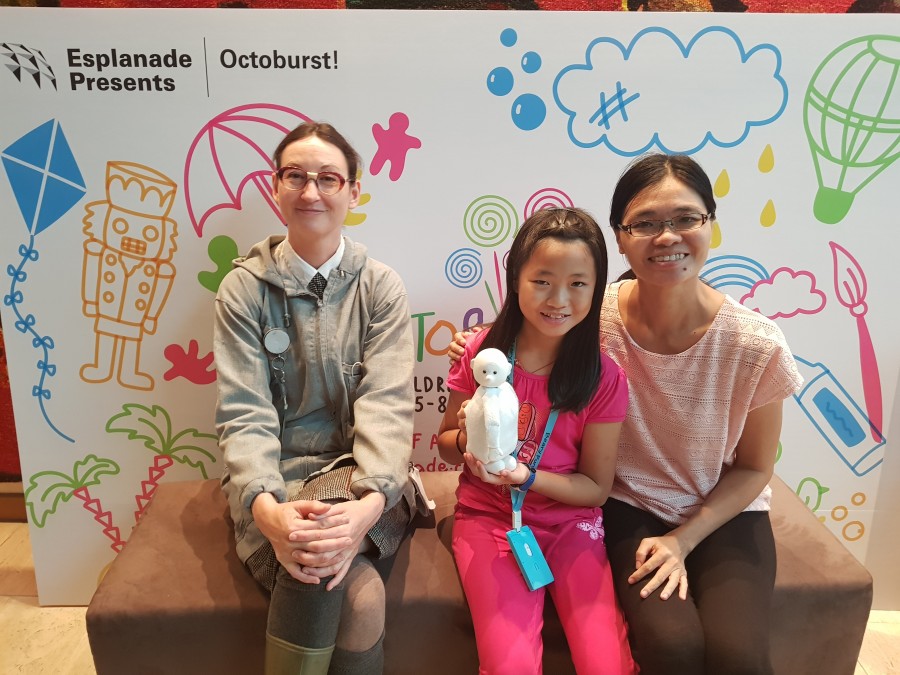 We have always liked participating in the Octoburst! Drawing Competition and Colouring Fun, A Pipe-ful Play Garden and the craft activities in Pip's PLAYbox in previous years' Octoburst! but did not manage to take part in them this year. We believe these are still as good this year, judging from the fully booked slots and many drawing entries being exhibited on the walls at Esplanade Concourse. We were disappointed that we could not take part in "Boats" at Esplanade Courtyard Green on Sat7 Oct 4 p.m. due to the rain, as this is something new for this year's Octoburst!

Next month Esplanade is going to host a 10-day festival Kalaa Utsavam that presents an exciting selection of classical to contemporary performances by acclaimed Indian artists from Singapore and beyond. Join from 17 – 26 Nov as they celebrate the best of Indian theatre, music and dance!

TickiKids team would like to thank Selena Tay for providing us with photos and impressions of the festival.