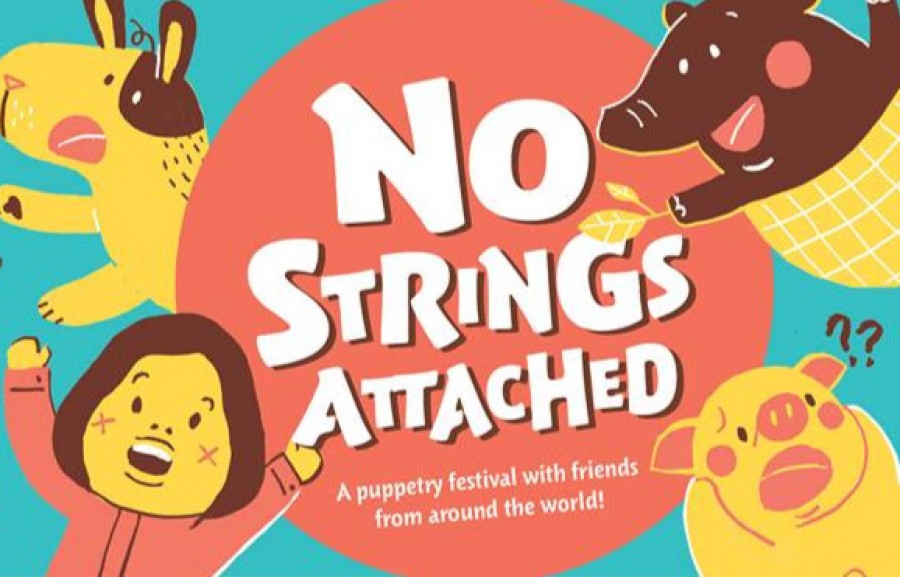 November 3-5 TickiKids Test Patrol families were invited to No Strings Attached puppet festival that took place at Goodman Arts Centre. Organized by Paper Monkey Theatre, the festival is in the second year of running. This year No Strings Attached featured puppetry artists from all over South-East Asia and was a perfect opportunity for Singapore audience to get to know more about puppetry traditions, see various kinds of puppets and enjoy the mastery of the artists from Malaysia, Thailand, Macau and Singapore. The audience could see all 4 shows on each day of the festival. The shows were recommended for kids aged 4 and up and each performance was followed-up by a Q&A session with the artists at which they shared about their puppets and the productions.

Wayang the Tapir performed by ACX Productions from Malaysia is a modernized shadow-puppet performance, telling a story of Tapir living happily in the jungle until one day his home was destroyed by people.

Highlighting the problem of deforestation, Wayang the Tapir shows children how fragile the ecological balance is and raises awareness of the world's endangered wild animals and plants. 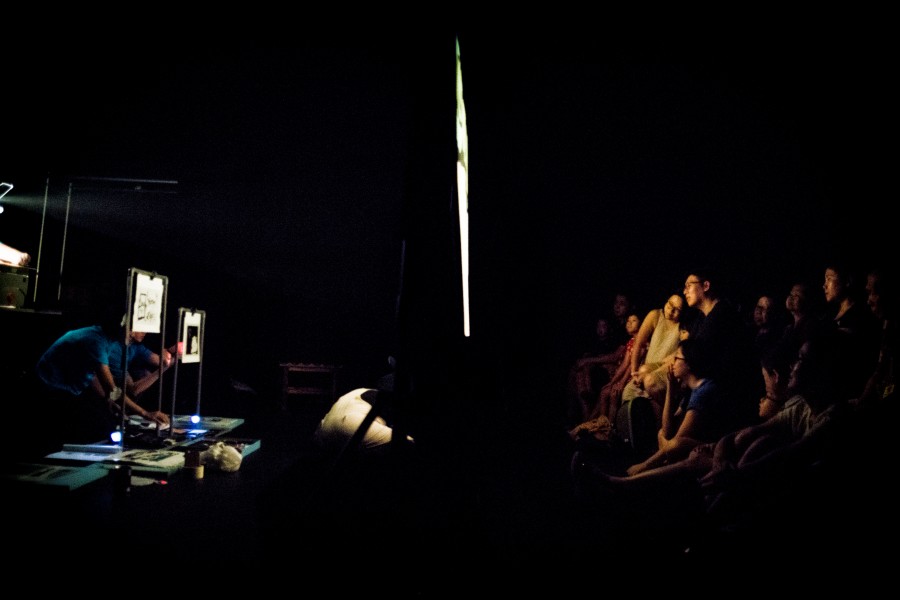 Ting A Tong Theatre from Thailand brought its puppetry production The Musical Twin Pigs, which Test Patrol kids enjoyed very much. It is a simple story of two twin pigs whose favourite thing in life is playing music by the canal, but one of their instruments disappears one day and twin pigs need to find it to be able to continue playing music together. The plot was very engaging and easy for kids to understand, and a wide variety of colourful and unusual instruments played made the show very entertaining. 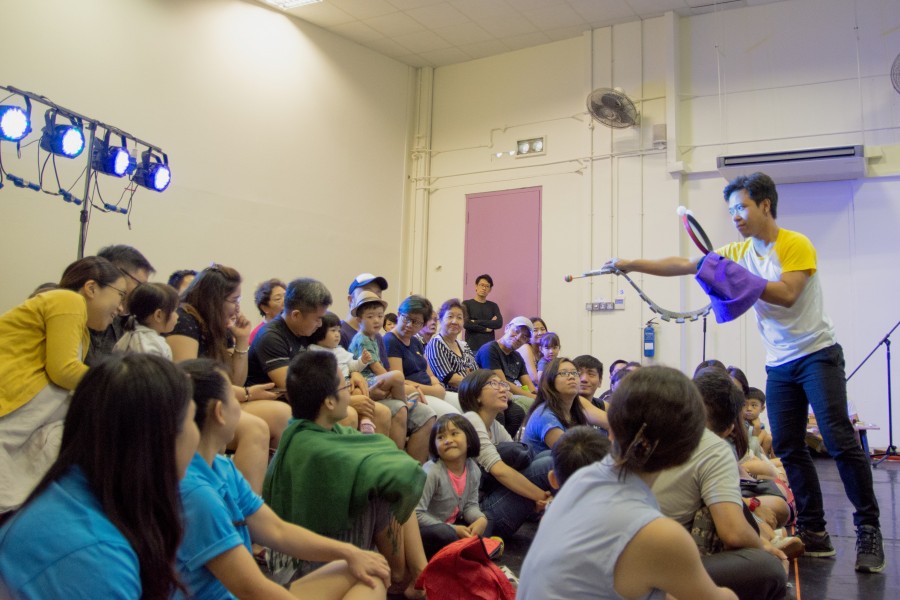 News about Xiao An, performed by Rolling Puppet Alternative Theatre form Macau, told a story of Xiao An whose grandfather passed away leaving him all alone. TV was Xiao An’s only company and one day he decided that he needed to be in the news headlines, and that was when strange things started happening in the magical village. 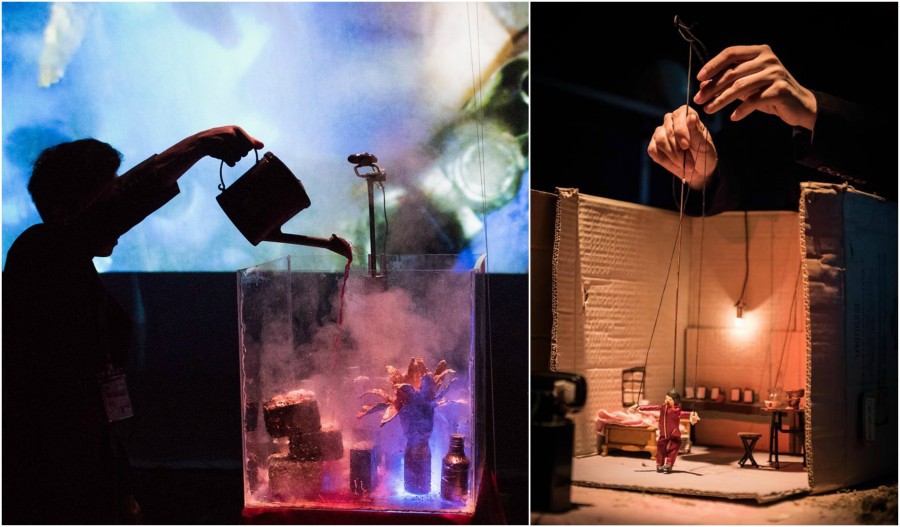 Scenes from News about Xiao An

The performance was recommended for older teens and adults, as the storyline and the topics brought up were a little bit complicated for little children to understand. However, most of Test Patrol kids that attended the show liked it anyway, because of the intricate combination of approaches used for making the story come alive: there were tiny puppets that were magnified on a projection screen, actors, wearing huge masks on their heads and various visual effects, including light and video. 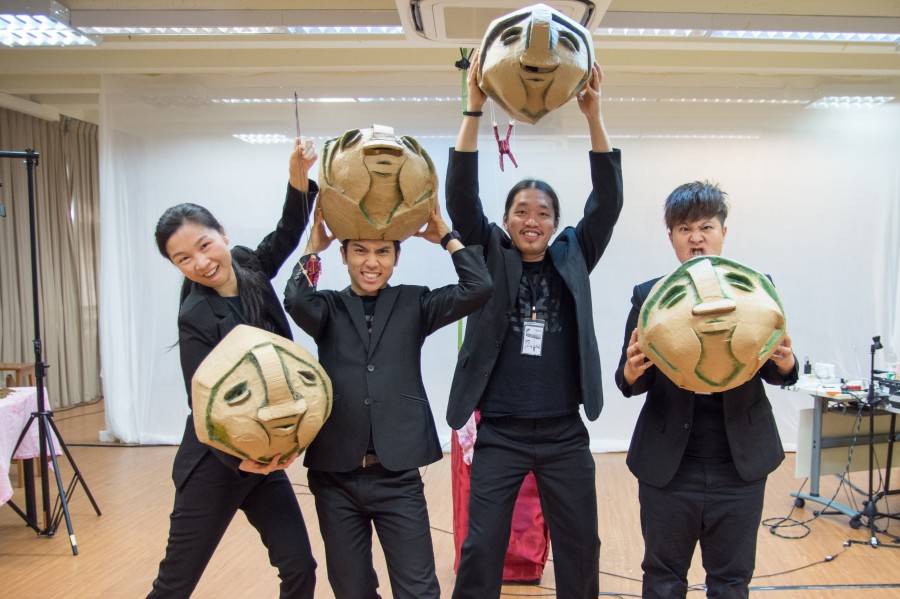 Doggy and MeowMeow, a puppetry production performed by the hosts of No Strings Attached, Paper Monkey Theatre, Singapore, was one of the kids’ favourite shows of the festival. Touching story of two little friends, a cat and a dog, that lived peacefully under a beautiful tree, until people’s plans changed their lives, but not their friendship. Bringing up a problem of stray cats and dogs in a big city, this story show kids how much these animals need our compassion, kindness and responsibility.

Stage design was minimalistic with puppets made of folded paper with clips on top. However, the main characters, Doggy and MeowMeow were easily recognizable, and once they were brought to life by the amazing actors, they immediately won the audience’s hearts. 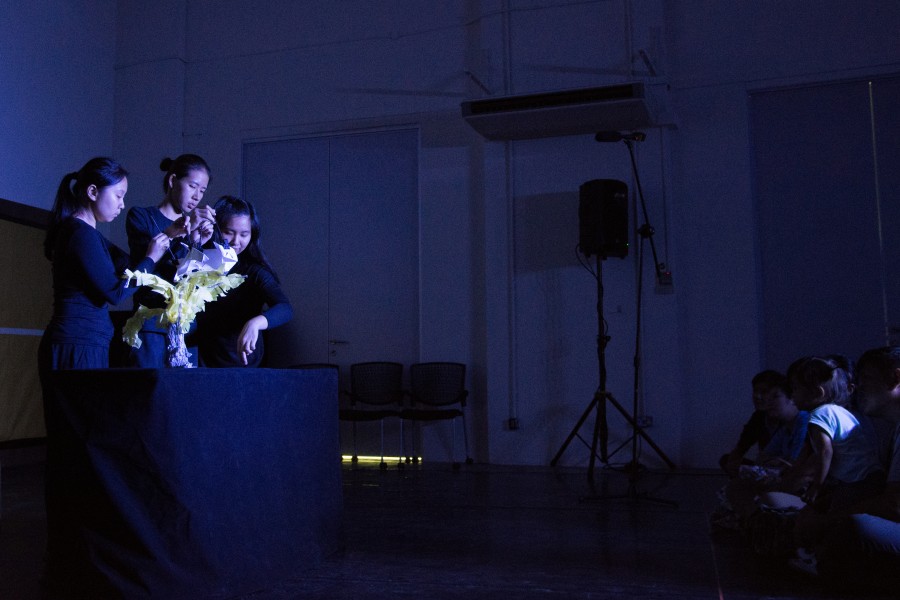 A scene from Doggy and MeowMeow

Paper Monkey Theatre did a great job, and the festival they organized could easily be a perfect event to introduce your child to theatre, thanks to its very nice low-key atmosphere without too much of a crowd or noise. Older kids and their parents could learn about different puppetry traditions and ways of interaction with puppets that they have never seen before.

Our little theatre-goers: Anya & Tanya, Zenda & Zavier, Keola (with one of News about Xiao An masks) and Devin posing in Goodman Arts Centre

We’ll be looking forward to next year’s No Strings Attached puppetry festival, while in the meantime, you can come check on Paper Monkey Theatre at Goodman: B-sides, a mini-festival celebrating local music and the arts, at which the company is going to perform its fable of Wu Song.

TickiKids team would like to thank TC Lee, Fellen Ungu, Anitha Malani, Joys Lin and Susan Lee for providing us with their impressions of the event.
Photo credit: Paper Monkey Theatre, ROLLING PUPPET Alternative Theatre and Ting A Tong Theatre