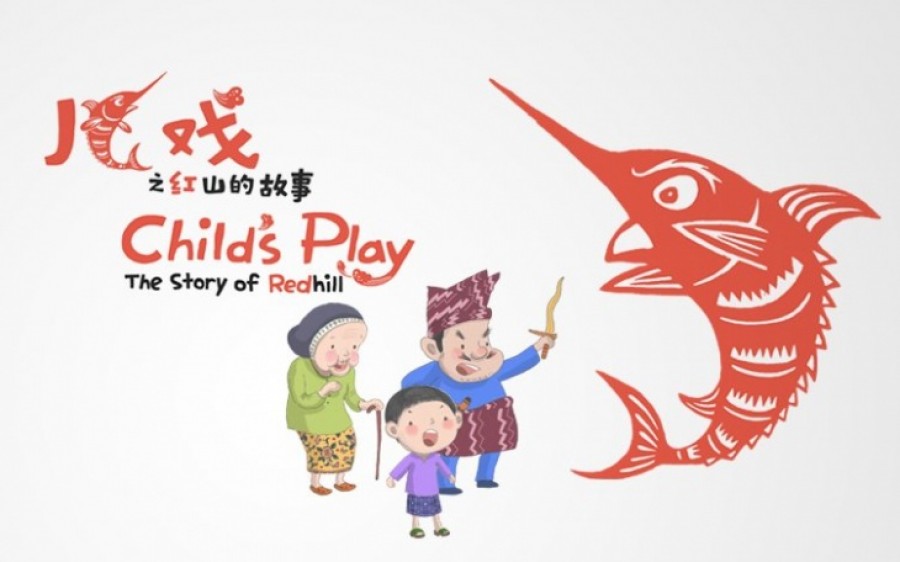 The Story of Redhill is based on Singapore folklore and is produced as a result of collaboration between the director Danny Yeo and 3 Pumpkin Projects. Together they managed to shape a unique and innovative children-only interactive theatre experience. 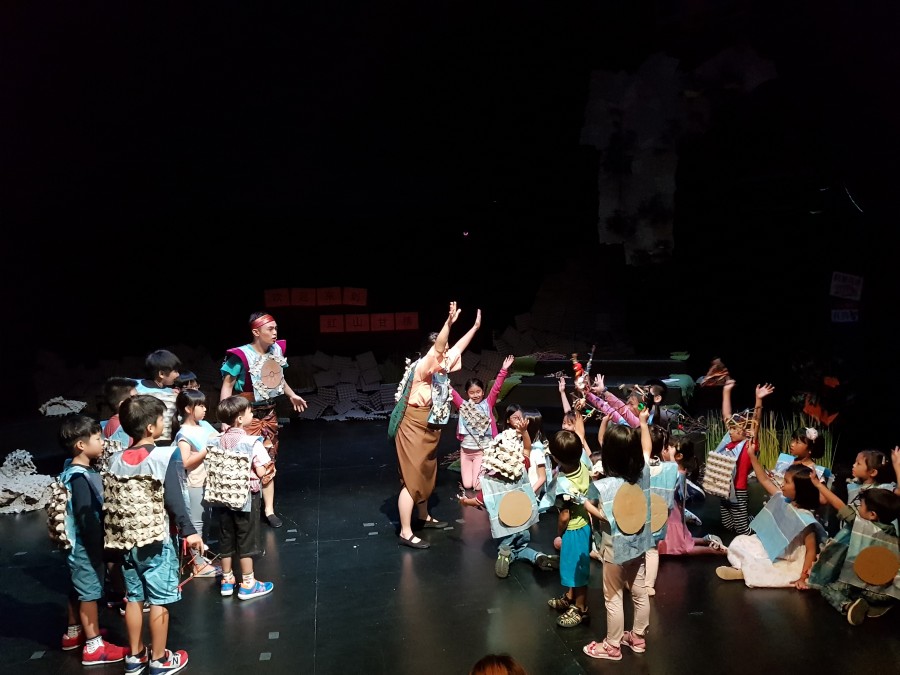 Before the play the outdoor area outside the Annexe Studio was already bustling with chatter and activities of many excited children and their parents. There was a short delay in the starting time of the show and visitors could go to the bakery inside the Esplanade Main Building to grab some food first. Some kids were getting a bit impatient about the wait while others were eagerly peeking into the dark studio through the glass door.

When the lights were turned on, and the kids saw the door of Esplanade Annexe Studio being opened up by the director Danny Yeo, everyone was very excited. The audience were directed to walk up a bridge (steps up to a long platform stage and down) to cross the sea to reach the village ground, where the audience sat on the floor facing the main stage area. 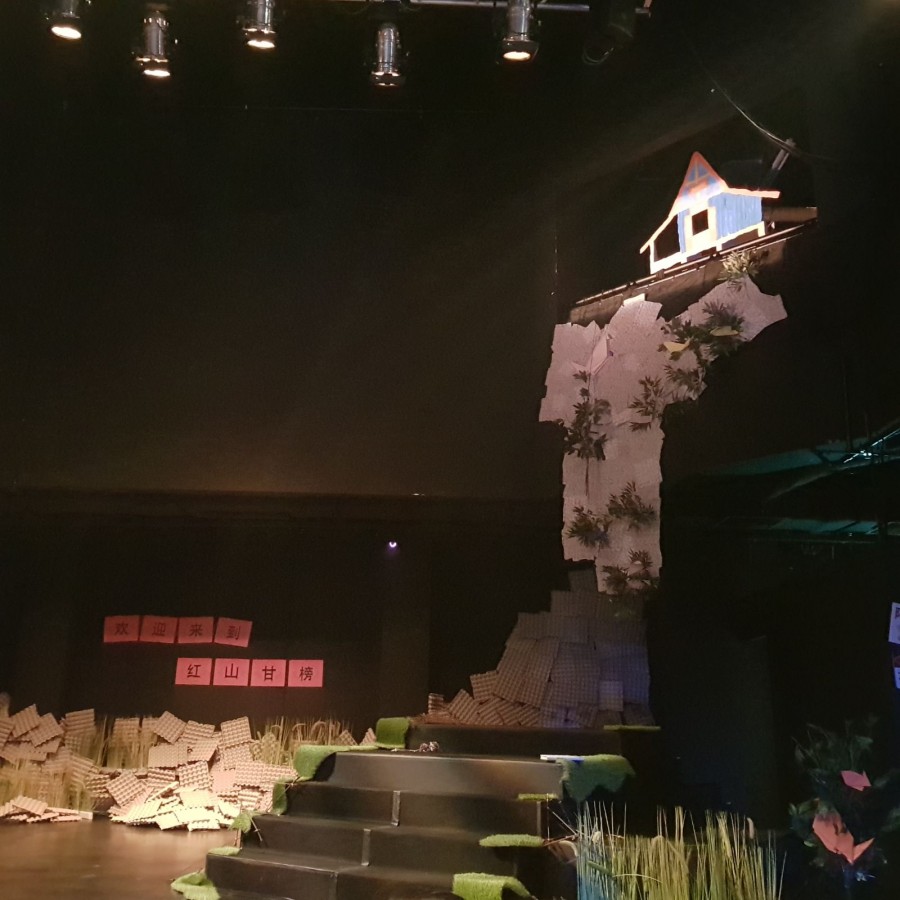 The atmosphere was cozy and everyone was asked to sit on the floor, making it a closely-knit environment. Honestly, I did not expect to be sitting on the floor, but overall it is a nice touch as we had to move around at certain parts of the show.

The main stage area was decked with many egg trays and there were twigs tied in triangles placed in piles, coconut trees, a hut on top of a hill, couplets to say "Welcome to Redhill Kampong", signboards saying "Beware of Swordfish", "To the Sea" etc., appropriately depicting the setting of the play - in a kampong with a sea nearby.

We were pleasantly surprised to meet the "bridge" the moment we entered the door, as we were expecting just the flat floor for the audience to sit on, as stated in the website. However, the first few audience to enter (including us) were confused as we were told to go up the "bridge" on one hand, but told to turn left to put down all our bags on the tables first, before going back to the "bridge"on the other hand. Nonetheless, the experience of crossing the "bridge" to reach the main stage area was novel and the stage decoration was good and appropriate to the theme. 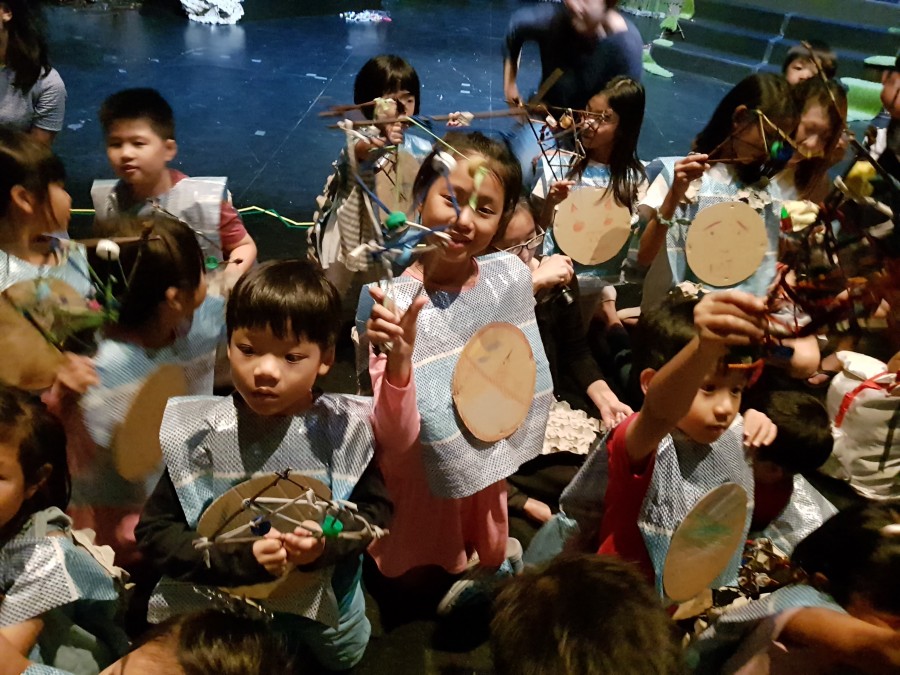 Both Sharilyn (10.5 yo) and Geralyn (5 yo) enjoyed this interactive theatre experience very much. They were totally immersed in the play and participated actively in the activities throughout, e.g. giving suggestions on how to weigh the elephant, telling their weights and joining the cast to get onto the "boat" to find out the weight of the "elephant", making their armour and fishing nets during the handicraft session, fighting the swordfish bravely with their equipment made, deciding on who to support (to kill or to save Ding Ding, the main character in the story). Even for Geralyn who does not have a good grasp of Madarin, she could understand the entire story line and could even volunteer her ideas in Mandarin, having a good time laughing away and joining in to hum the song together. These are the best tell-tale signs of the kids' engagement level in the play and the success of this play. 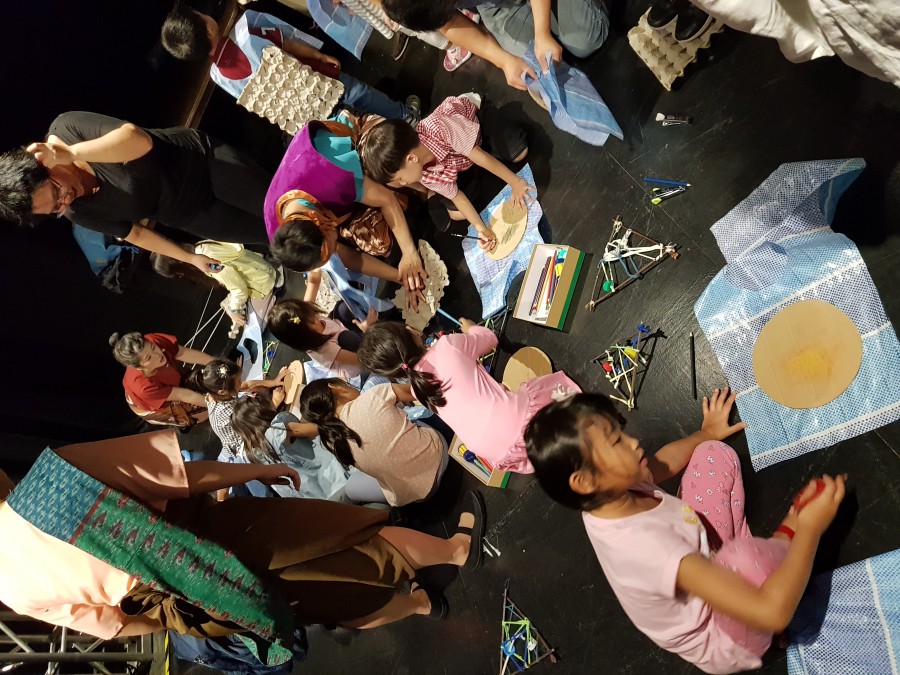 Sharilyn's favourite things about Child's Play The Story of Redhill is the incorporation of handicraft session (to make the fishing kit and armour, to be used as their props for the next part of the show) in the play and the use of the props made in the figh against the swordfish. She was having a great time trying to trap as many swordfish as possible in her fishing net.

Geralyn's favourite thing about the play was also the “fighting with swordfish” scene, but she was more amazed with the swordfish flying over from the sea towards them, and loved the two types of swordfish that she caught -- the origami swordfish (especially) and the swordfish made with badminton shuttlecocks. 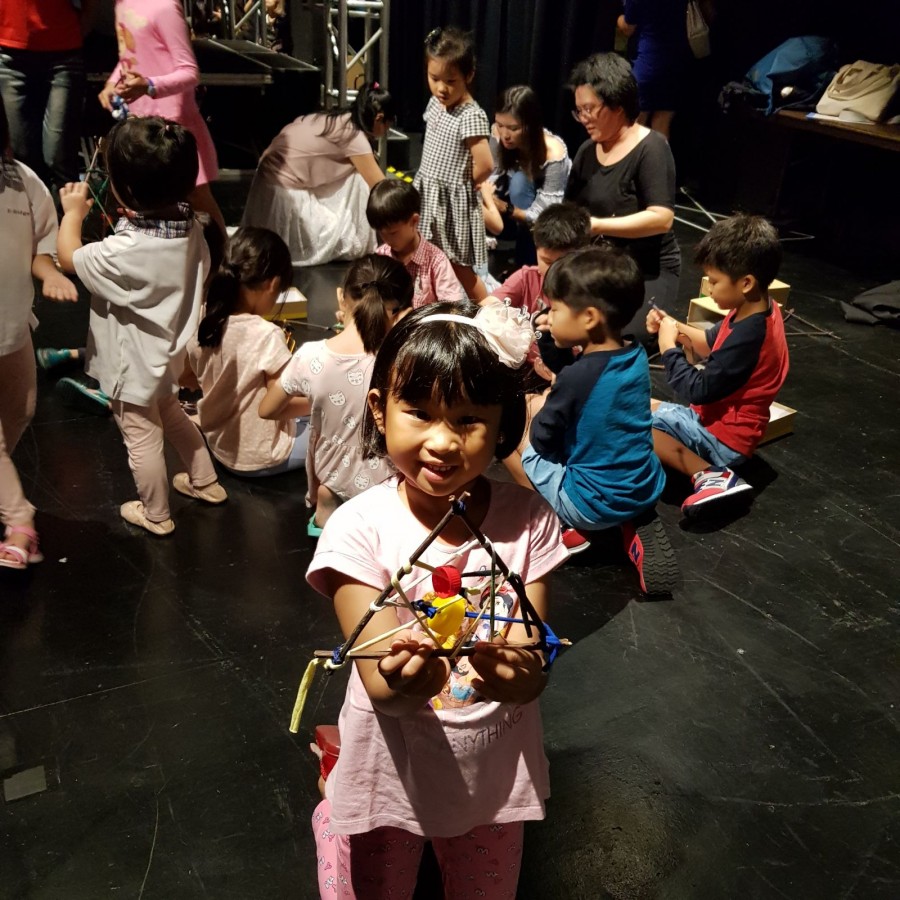 Keola loved it too. She followed Ding Ding to measure the weight of the elephant. She made the fishnet, to catch the flying fish. She also made the armour to help Ding Ding to protect the village, and finally to help to protect Ding Ding from Paduka Maharaja army.

Yes, my children loved the event. My younger child (5 years old) could follow the instructions well and was eager to participate when they asked for participants to volunteer. Both of them had to do art and craft activities which they treasured after the show. There was a voting near the end of the show whereby they had to choose which actor/actress they support, and my younger child took part enthusiastically. My other child did not take part as she just wanted to watch what will happen next. There were some Q&As section in between the show (asking for the children to contribute creative answers), which was a nice touch, but my kids either did not know how to answer or were too shy to speak up.

What are your impressions of the show?

I liked it. The show is very engaging and make the kids involved in the performance. I could see some older children felt bored at first, but after the activities they were happy and they enjoyed it.

I liked the musical-like show, which exposed them to different concepts in Chinese. The music and dancing was great. The art and craft activities were interesting to engage the children and make them immersed into the show. The actor and actresses acted very well and I could follow what was happening in the show easily. 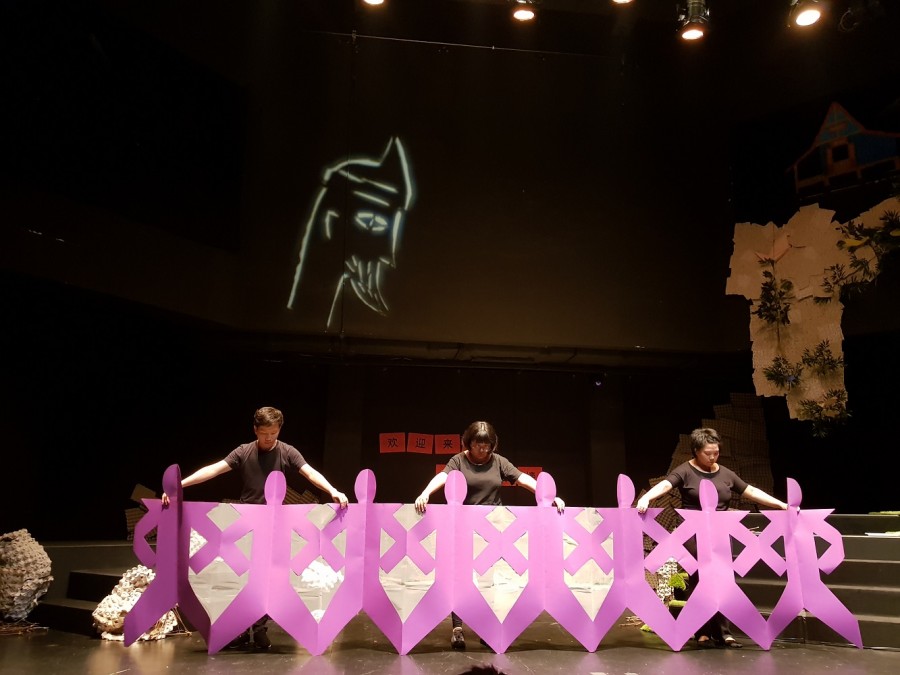 I particularly like the pace of the show, with the timing set aside for the handicrafts tying in nicely such that no kid would be waiting too long for the others to finish their work and every kid had time to complete their props needed for the next part of the show. I also like the mix of media used throughout the show, e.g. the projection of a cut-out shadow of the Sultan; the paper-cut army troupe "marched out" by 3 crew; use of badminton rackets to hit the origami and shuttlecocks "swordfish" over from the "sea" at high tide (with a long strip of blue fabric being raised up and down, forming curves of waves), the long flowing red cloth, symbolizing blood, being carried down the "hill" and over all the children's heads; etc., coupled with appropriate music, lighting and songs.

We all loved the easy-to -pick-up rhythm of the songs in the show, which we could hum easily to. If you listen to the lyrics carefully, they are meaningful and relevant to the messages to be conveyed but I doubt the children would be able to appreciate or understand at this level yet.

What are the highlights of the show? 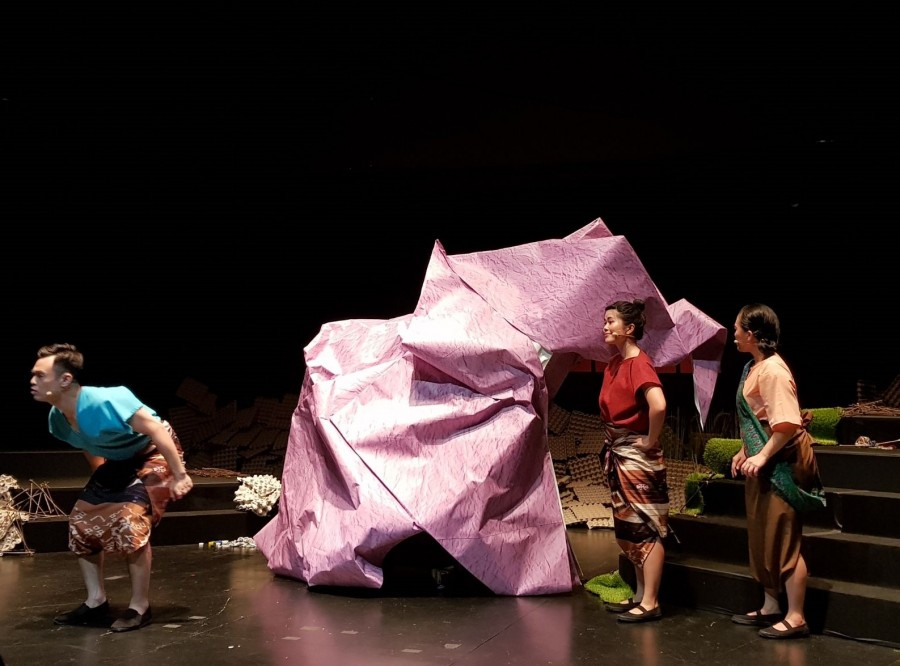 The favourite things were making the shield to "defend" against the swordfish and "catching" the swordfish when they appeared. The swordfish "battle" was fun and engaging.

Yes, the scene of the swordfish jumping out of the sea and the fight against them. A really innovative idea and everyone was pleasantly surprised and excited by the unexpected way of how the scene was delivered. Of course, the kids-only admission and the incorporation of handicraft session as part of the performance are two novel ideas to us.

TickiKids team would like to thank Tay Mui Keng Selena, Fellen Ungu, Joys Lin and Kenneth Ho  for providing us with their impressions of the event.