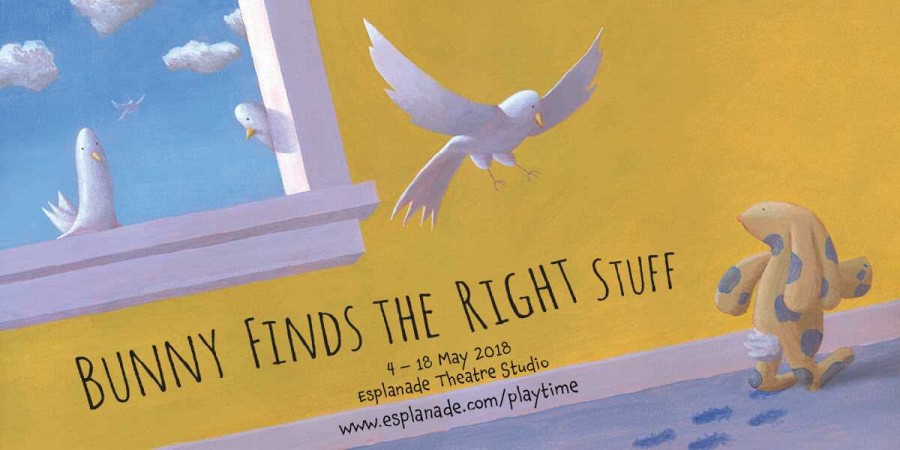 If you made a list of everything you want from a theatre for children, you definitely would not be disappointed by the "Bunny Finds the Right Stuff" show which is currently being shown at the Esplanade Theatre Studio. On 6th May 2018 TickiKids Test Patrol family saw for itself this richly expressive, kind-hearted, warm-spirited performance for children aged 2-6 years.

If you made a list of everything you want from a theatre for children, you definitely would not be disappointed by the "Bunny Finds the Right Stuff" show which is currently being shown at the Esplanade Theatre Studio. On 6th May 2018 TickiKids Test Patrol family saw for itself this richly expressive, kind-hearted, warm-spirited performance for children aged 2-6 years.

Esplanade, celebrating its 15th anniversary this year, has decided to re-stage their most widely accepted «Bunny Finds the Right Stuff» show, which has been kicking around for over 2 years now since its premiere in 2016 in Singapore.

This show is one part of the «PLAYtime!» interactive series of theatre shows, a project by Esplanade Theatre, specially designed for little children. The theatre believes such an experience is a perfect first step into the world of theatre for your kids! 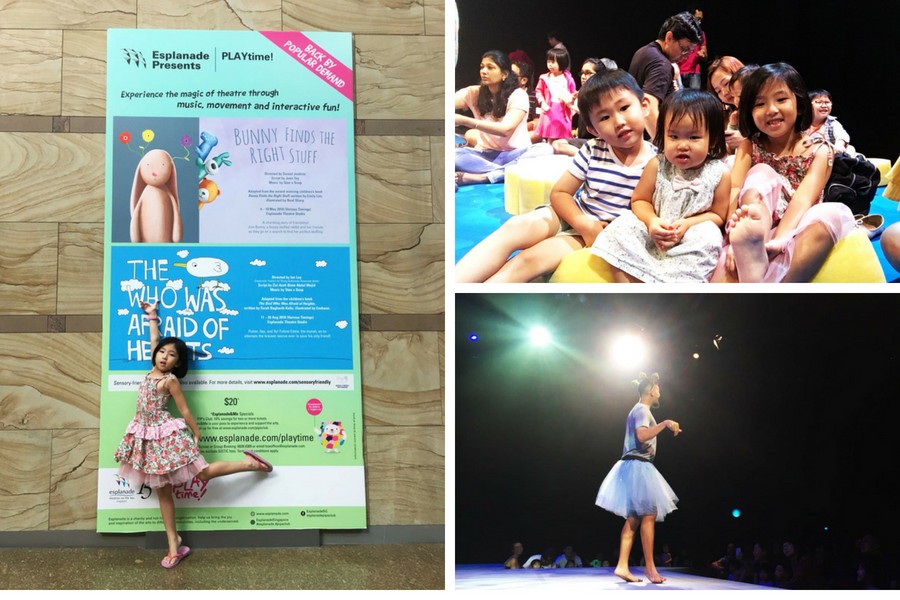 “The studio was spacious and large enough to conveniently accommodate both adults and kids, despite that the venue was inundated with visitors since it was a sold out performance. The idea of providing the audience with some spongy cushions in the form of clouds instead of ordinary chairs was just great. So we were cosily ensconced in the comfortable safety of the studio, sitting on the floor and looking at the brightly designed stage. At the same time, there was enough space for my toddler to walk around me. The flexibility of movements along the show is another benefit for little theatregoers, in my opinion. The kids were very excited.” 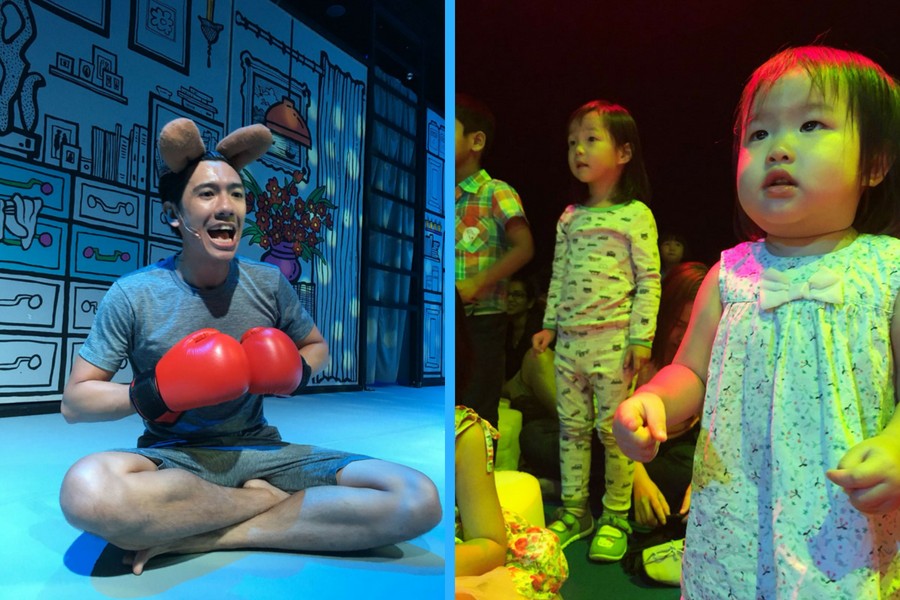 The children’s book “Bunny Finds the Right Stuff” was written by an award-winning author, Emily Lim, and an exemplary stage adaptation of this touching story was created by an award-winning playwright Jean Tay. The flawless beauty of the engaging plot leads us to observe the greatest impact of the performance: children enjoying the magic of theatre through music, dances and interactive fun, in this story about friendship and support.

Bunny, a floppy stuffed rabbit, was not happy with her appearance, which she acquired over the years. She persistently tried to do everything she could to find the right stuffing to fill herself up, but she just couldn’t seem to get it right. Whatever Bunny tried to use as a filling, such as wet soil, blueberries, fluffy clouds grabbed from the sky via a long ladder, nothing was working out well. Only Bunny’s friends Dinosaur, Grizzly Bear and Kangaroo, managed to sort things out, through finding suitably filling stuff to lift Bunny’s mood, demonstrating the powerful magic of friendship. In one of the interviews that were conducted, Daniel Jenkins, the director of the performance, revealed that he always put into his shows some exciting, crazy, funny bits, blending them with little magical moments, in order to make the audience slightly wild with excitement and joy.

Mrs Clarinda Lui, "The cast was funny and able to engage the kids. We particularly remember the pleasure of dancing with the funny characters Dinosaur, Grizzly Bear and Kangaroo during the show. My youngest child enjoyed it a lot, especially when the actors involved the kids into the process of finding the right stuffing for Bunny." 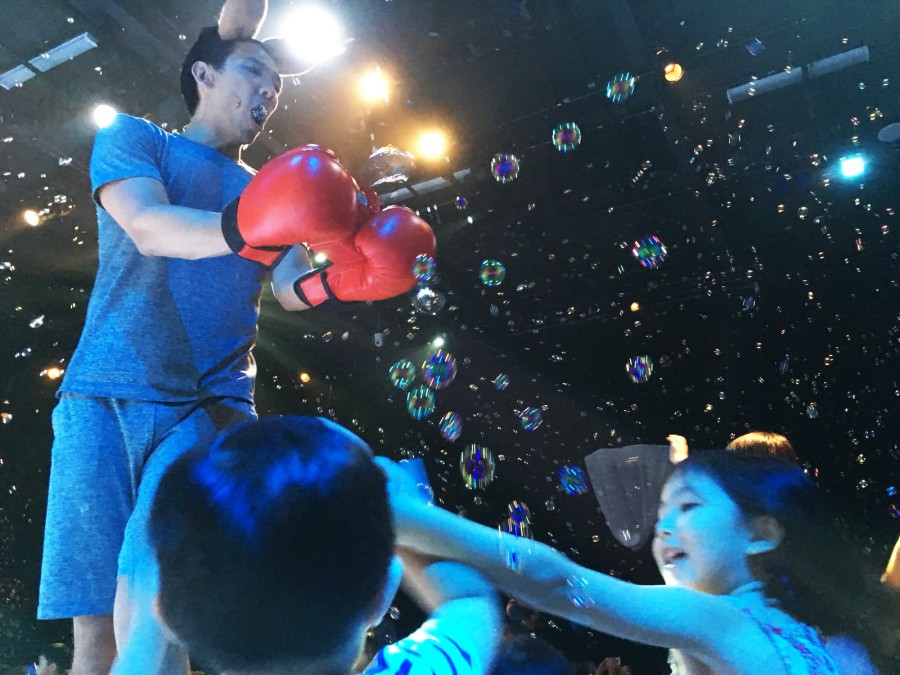 "All children in the studio were captivated by the sudden bubbles blown by a bubble machine, at the moment, when Bunny’s friends emptied her of the fruity stuff and gave her a good bath. The kids were hooked throughout the show. I, personally, liked the ladder in the middle of the scenery where Bunny climbed up to reach the fluffy clouds. By the way, the clouds were prettily designed too." 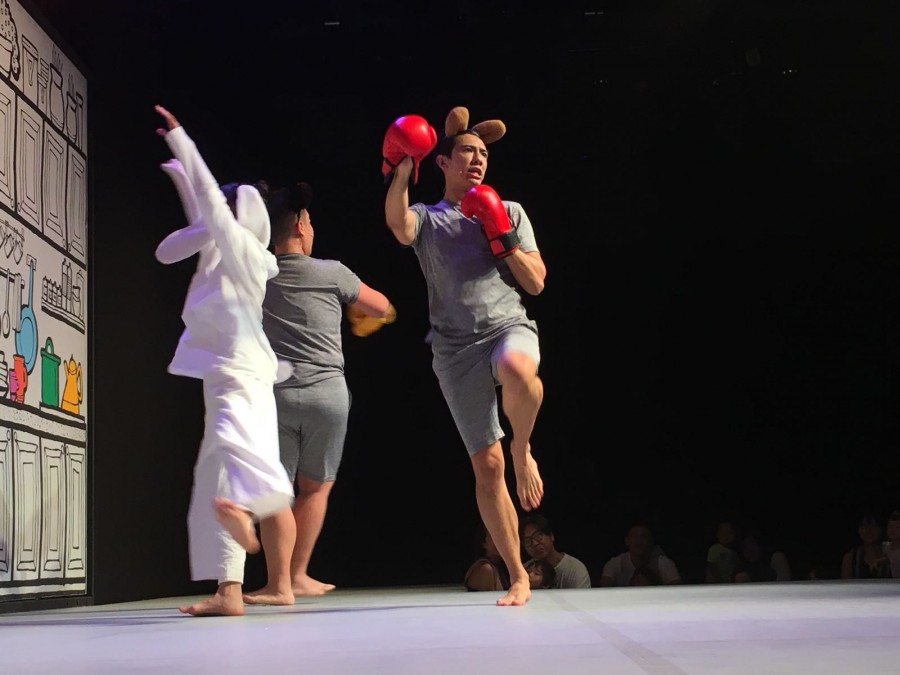 "To be honest, it is difficult to focus on some particular features. We certainly loved everything: catchy music and songs which continued to sound in our heads even after the show, lively dances, bright and striking set design, simple, gentle and encouraging fairy tale that teaches children a strong moral lesson, the understanding of genuine friendship. The whole show has even more features than I expected. I highly recommend the show for children from 1 to 7 years old."

Performances of "Bunny Finds the Right Stuff" will be shown at the Esplanade Theatre Studio until 18th May 2018.

TickiKids’ team would like to say thank you to Clarinda Lui for providing us with her impressions of the performance.