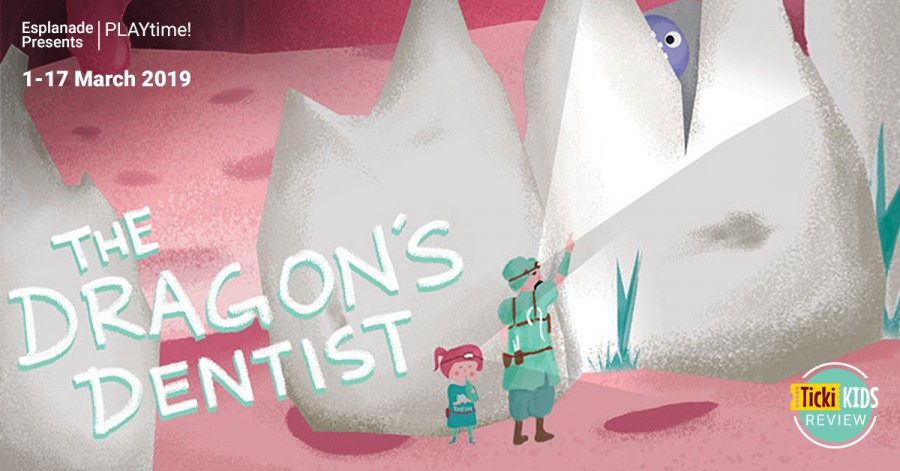 The iconic Esplanade Theatre Studio, widely famous for its committed family vibe, is currently premiering the newest kids' show The Dragon's Dentist, with tickets on sale now. The PLAYtime interactive theatre series by Esplanade has never let parents down when it comes to kids’ shows. This time, their creative production team promises festive madness for under-sixes and to keep the whole family happily entertained. Last week, joining theatregoers from Singapore, TickiKids Test Patrol attended Esplanade to watch The Dragon's Dentist, a much anticipated performance about a daring adventure of the dragon dentist, his apprentice and poor mythical creature that suffers from toothache. Their overall verdict? Excellent! For any parents who can get their hands on a ticket, it will, no doubt, be a fantastic chance to witness the riotous blast of fun, glorious songs and audience participation after which your kids will never refuse to brush their teeth. 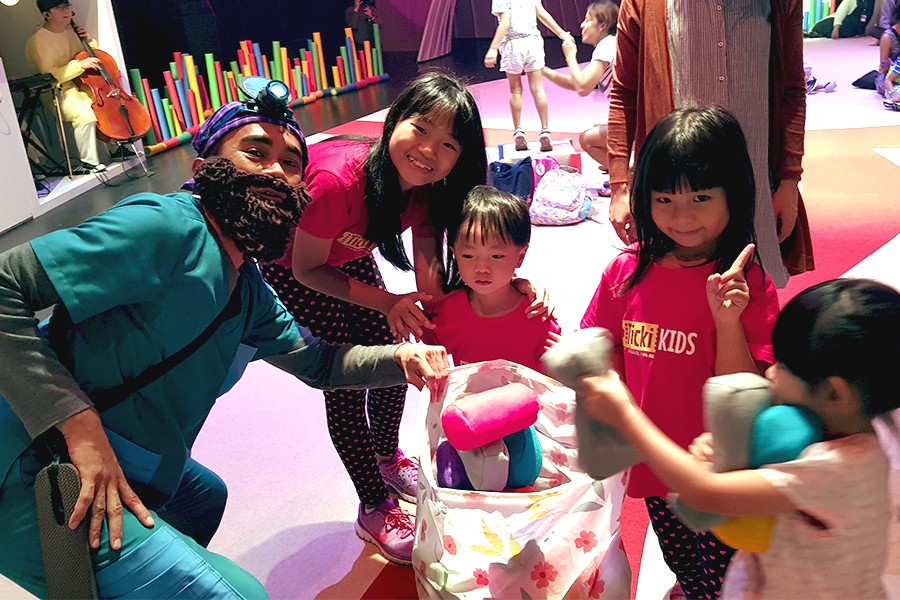 A group of show makers and fabulous ensemble cast led by director Ian Loy have done a really good job, the result of which will thrill the first-timers as well as loyal Esplanade-lovers. The key to the performance’s almost eerie success is its plot based entirely on Ian Loy's parenting experience.

“What inspired me to work on this production is my little son who always runs way when it comes to brushing teeth. Every time I have to chase after him and drag him to the sink. I’ve realised it could be a frightening experience to him after a while. That is how The Dragon's Dentist was born”, – says the director of the performance Ian Loy.

Meanwhile, we asked our two Test Patrol families, who apparently know for a fact about these kids' fears, to share their impressions and opinions of the performance. 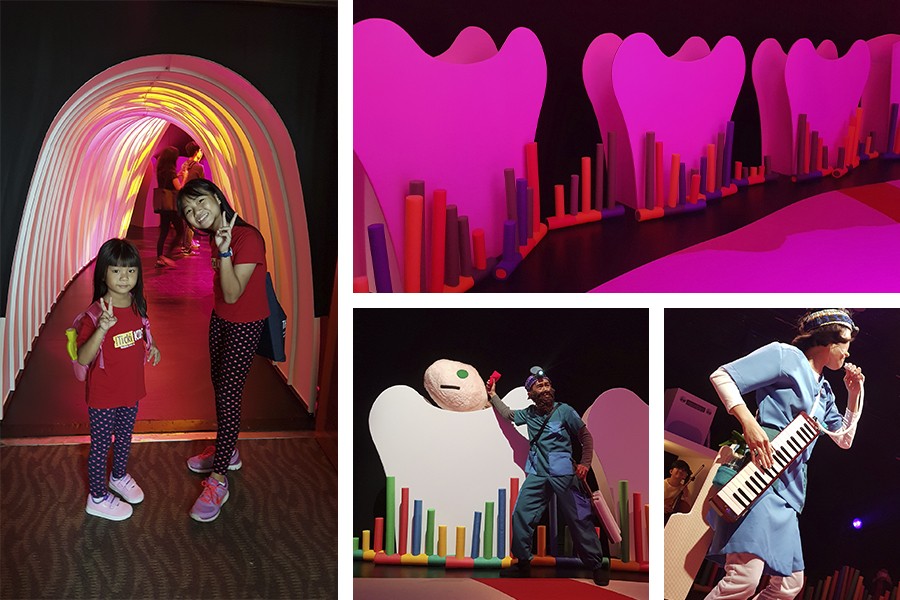 WHAT WAS YOUR FIRST IMPRESSION OF THE SHOW?

Enter the dragon's mouth for an adventure featuring a gigantic set of teeth! That’s exactly the first impression that we had when we were directed to the entrance of the Theatre Studio. The archway, lit with pink, orange and yellow lights creating different designs, looked like dragon's pharynx. The girls could not resist touching the side walls of the arch, made from soft elastic material, which also gave a feeling of “moving muscles”. Within the Theatre Studio lit mainly with red light, three sides were lined with 17 gigantic white “teeth” with colourful foam noodle rods in front of them, resembling the nerves around the teeth. The whole floor area was also littered with many chunky, soft 3D-shaped pieces, made from felt stuffed with cotton, resembling food bits inside the dragon’s mouth. The “stage” at the remaining wall is a set comprising steps leading up to a “door”, beside a platform with “cupboards and drawers” below it, a “telephone” and “radio” above the area where the keyboard and cello were, and where the musicians sat during the show later on. The kids were readily able to identify the teeth and pick up the chunky soft pieces. Familiar with PLAYtime’s seating guidelines, they made a quick scan around the entire theatre and found themselves a spacious floor area in front of the “stage” to settle down. Most of the audience did not notice the giant “uvula” hanging overhead, just beside the “throat” archway (we were directed to it by three actors during the pre-show activities). 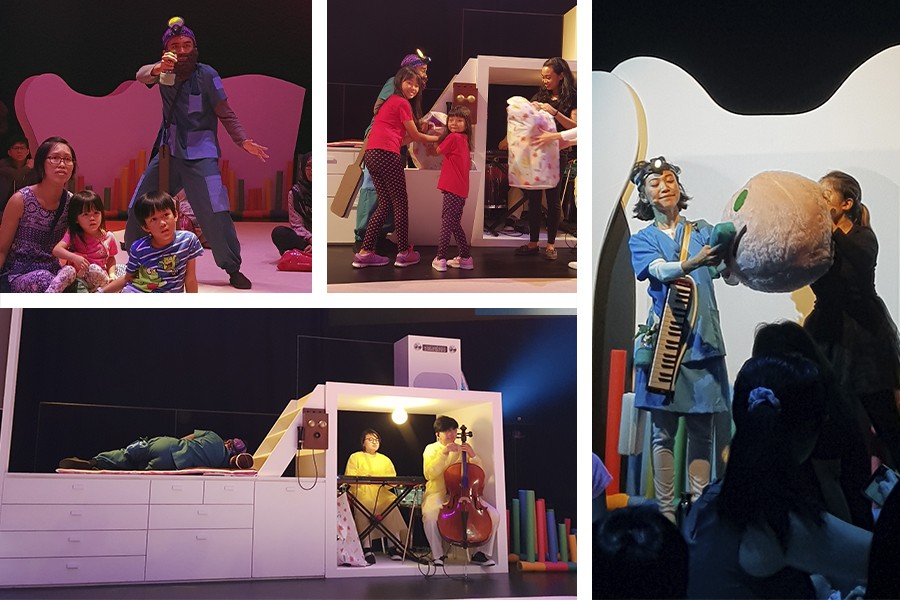 Although Isha was a bit scared initially as it was darkish, he warmed up to it very quickly. We really enjoyed the level of detail in the 3D set pieces and props, puppetry, sounds, wind, water spray etc. aided by the interaction with the actors and immersive activities. I liked that children were not constrained to sit and could roam freely. In my eyes, that was a brilliant idea even from the perspective of parents who could enjoy the show in a relaxing atmosphere. 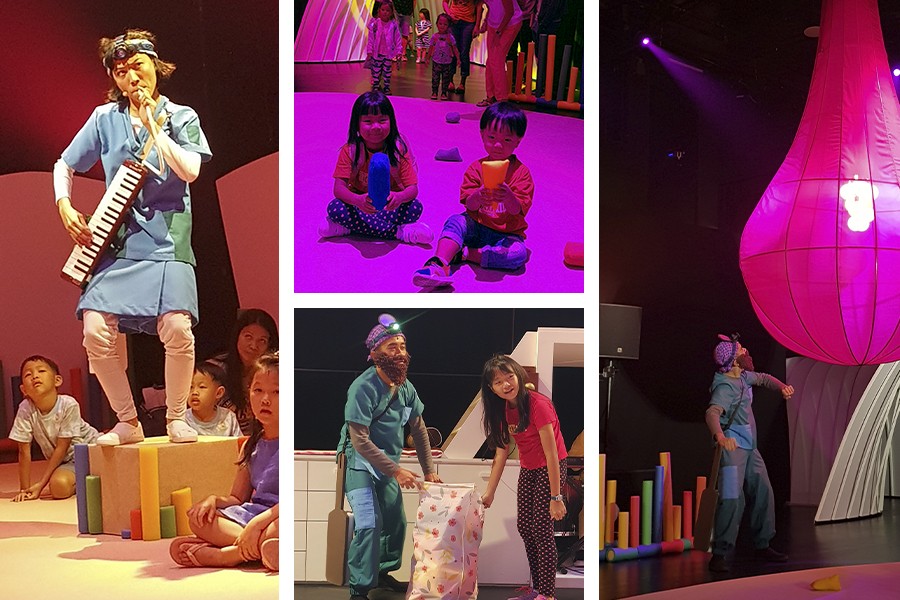 Mrs Tay Mui Keng Selena, Parents were equally engaged during the play, joining the kids during the song and action dance, following their kids around to pick up the food residue, bringing them towards the ropes and watching them grab the ropes to pull the tooth out. As a parent, I liked the atmosphere of the entire play, where the fearful experience of visiting a dentist was introduced to children in a light-hearted and fun way. It helps kids to learn how to overcome their fears while embracing new experiences. I particularly like the part with shadow puppets depicting the scene of injection and clearing of plaque in the tooth cavity, and the touching letter from the Dragon’s Dentist to his Apprentice, which ended with a tinge of humour. Parents were also busy taking photos of their kids’ involvement in the play, as it was announced that it was fine to take as many photos as possible, but filming was not allowed. 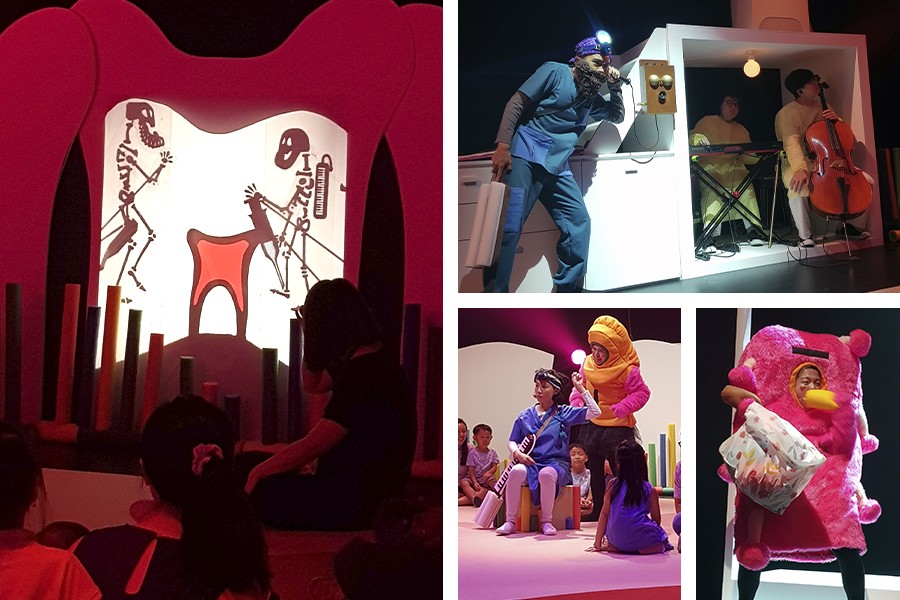 PLEASE, TELL US ABOUT THE ACTIVITIES YOUR KIDS TOOK PART IN.

Mrs Tay Mui Keng Selena, The kids actively participated singing the song together, doing the actions representing brushing the teeth left, right, in and out; lights; tools and counter; spray water; as the song went along. They also pointed to the “uvula” when the dentist said the word. The uvula lit up with a few yellow ball-like lights within the elongated red teardrop-lantern-shaped prop hung overhead, which drew loud “wow”s from many in the audience, including the adults. They also invited 2 members of the audience (Sharilyn was one of them) to help carry the sacks of food residues collected, to throw them into the “dustbin”. When the Dentist’s Apprentice was running around to find the Bacteria, the kids were equally excited to run around too, to help find it. Lots of laughter and squeals of joy were going on during this segment. The kids were intrigued to see the short segment of shadow puppet where the Dentist and his apprentice performed an injection and removal of the plaque in the tooth cavity, behind the “tooth” screen. Enthusiastic participation was seen when the audience was invited to help in holding on to two long ropes attached to another “tooth” and helped in pulling the “tooth” off. They really pulled hard with lots of sound effects made, feeling tired at the end of the “extraction” session. 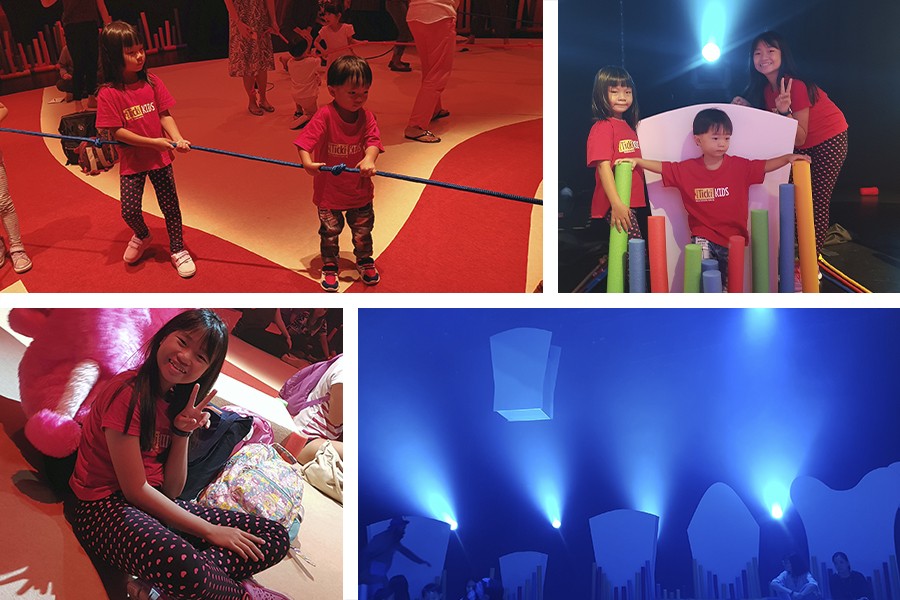 WHAT DID YOUR KIDS LIKE MOST ABOUT THE SHOW?

Mrs Tay Mui Keng Selena, Sharilyn’s favourite part of the play was the songs and active dances she actively participated in throughout, despite being one of the oldest kids around. She was still guiding her two younger siblings to sing the song after a few days of watching the play. Geralyn’s favourite part of the play was the scene when the Dentist’s Apprentice was chasing the Bacteria all around the whole mouth, as she was following them around too. She also enjoyed the rope pulling activity to extract the giant tooth. Skyler’s favourite part was his involvement to help pick up and clear the food residues and to help pull off the tooth. He was also very intrigued to view the shadow puppet show happening behind the lit tooth screen. They all loved the archway at the entrance and the uvula which were very nicely done up and lit – up. 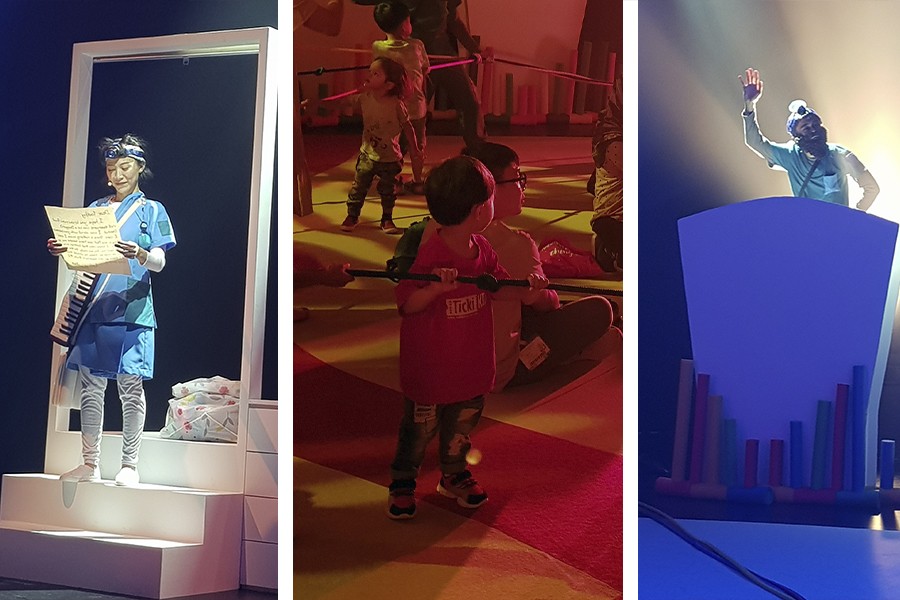 Why not arrange your visit to the Esplanade Theatre Studio to watch their next children's show? Check out an upcoming performance within the PLAYtime interactive theatre series and book tickets online.

The TickiKids’ team would like to say thank you to Mrs. Tay Mui Keng Selena and Mr. Puvan Selvam for providing us with their impressions and photos of the performance.