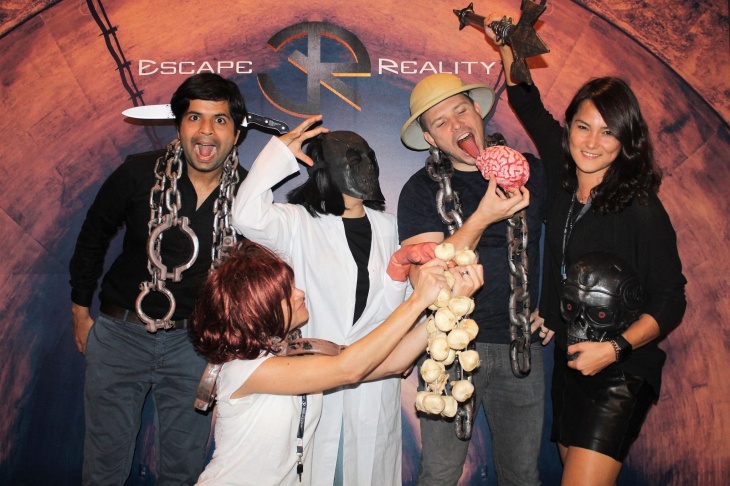 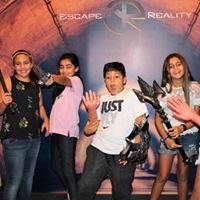 Escape Reality is a game played in real life.

Offering eight hi-tech, innovative game rooms with high-end design, Escape Reality is the largest real-life escape room experience in the region. It is interactive and immersive, where players are trapped inside a themed room and must use their logic, problem-solving, communication and teamwork skills to find their way out in sixty minutes, before time runs out. It is an excellent form of alternative entertainment, fun and educative for all ages and abilities.
You and your team have just 60 minutes to escape one of our real and intense movie-inspired rooms.
You'll come as friends and leave as heroes as you battle against time to solve puzzles, overcome challenges and defeat your doubts.rience is fun for all ages thus there is no age restriction. However, children under the age of 12 must be accompanied by an adult.
If you are new to the concept of real-life escape games, we would recommend attempting a 3 or 4 star difficulty room before attempting one of our 5 star rooms. We suggest browsing through the relevant back stories of our various different rooms in order to decide which would you like to undertake.
If you would like to purchase a gift voucher for a friend or relative, then please contact the relevant branch. Our gift vouchers can be redeemed via our online booking page and at the branch you bought it from.
Escape Reality provides a creative form of alternative entertainment, very different from usual team building events. We can accommodate for a vast array of private events such as corporate events, birthday parties or anniversaries. We will always attempt to cater to any specific requirements.

Jungala (players: 2 to 6). You have discovered an old board game in your attic and once opened you are engulfed by a vortex and transported into an alternative realm. After only seeing a glimpse of the terrible world inside you are thrown back into reality. Vowing never to approach the game again you attempt to leave but the door has been locked trapping you in. Glancing over to the game you see the words “The dice have been rolled.” You have no choice but to complete the game or be trapped inside the other realm for eternity. You only have sixty minutes to complete the game!

Enigmista (players: 2 to 6). There have been reports that there is a serial killer on the loose. Many people in the area have gone missing and no traces of their whereabouts have been discovered. Only one survivor has lived to tell the tale of what happened the killers lair. Rumour has it that he forces his prisoners to perform ghastly tests to see how far they can push themselves in order to escape. You have suddenly awoken to discover that you have been locked inside a room of complete darkness with no recollection of how you found yourselves in this situation. Your captor has devised a series of games to test how much strength you have in order to your own lives.

Iron kingdom (players: 2 to 6). Within the largest continent of the world, known as the Seven Kingdoms, there exists seven noble families. In the heart of this Kingdom lies the Iron Throne, the main source of conflict between everybody in the land. Whoever sits on the Iron Throne rules the entire continent, a position desired by many, a position in which people will go to extreme lengths to hold. News has quickly spread over the land suggesting that the new King is not the rightful heir to the throne. The discovery has caused an eruption throughout the Seven Kingdoms and a battle for the throne has broken out. You must find out who is the rightful heir to the throne. Who are you going to support? Which house are you going to fight for?

Machina (players: 2 to 6). A team of high-tech scientists and programmers have assembled to perform ground breaking experiments in developing the first instance of true artificial intelligence known to man. You have just been accepted onto the team of scientists and have arrived at their headquarters. After a few days you realise that scientists are suddenly leaving and that these robots are showing scarily human-like emotions. You decide that you need to leave as quickly as possible as something peculiar is happening, but all of the doors have been locked trapping you and the rest of the team inside. Can you all escape before you reluctantly become a part of the experiment?

Nosferatu (players: 2 to 6). It is currently 1841, a time where the presence of Vampires has existed and been well documented for many centuries. You are in a small region of Romania, West Transylvania, investigating the untimely deaths of your close friends. Upon examining their bodies, all signs point to the presence of an infamous Vampire. You must use your skills to identify and find the most dangerous Vampire known to exist in the current world, Nosferatu. Will you become the prey or the predator?

Fibonacci (players: 2 to 6). You are a cryptologist assigned to work with a team of detectives to solve a gruesome murder in an art gallery. The corpse was discovered surrounded by mysterious symbols linking to the Fibonacci sequence. You have begun to unearth crucial information which has been kept a closely guarded secret for thousands of years. After discovering too much a ruthless group of dangerous individuals is following you, trying to catch you and keep you quiet. Preventing you from learning further truths, you have been trapped inside the room. You must use your expertise to solve the complex clues lying within or face the truth never being revealed.

Alcatraz (platers: 2 to 6). In 1934, Alcatraz transformed into a maximum high-security prison housing the most infamous and dangerous criminals. Situated in the chilly waters of San Francisco Bay, no prisoner has ever successfully escaped. Alcatraz has just reached its maximum capacity for the first time in history - because of you.
You are all masters of escaping and no prison has managed to contain you. As highly skilled individuals you have been plotting your escape plan and now the time has arrived. A diversion has been caused by other inmates and the warden has sprinted off to help, leaving you in your cells unguarded. This is your prime opportunity to make your escape attempt. Can you escape before he returns and catches you?

Apocalypse (players: 2 to 6). A series of cannibalistic homicides has begun to occur in the city of Dreadwood. Police have failed int heir attempts to investigate and prevent these horrific crimes and had to turn to a team in their Special Forces department known as “Alpha Team”. They were commissioned to unearth the cause of this madness and restore public safety. However, the Alpha Team have disappeared with no traces of their whereabouts. A second team has been sent on a rescue mission to find them. You and your team are known as the “Goblins”. The last time Alpha Team gave report, they mentioned something about an old factory and a bio?weapon. You have to follow their tracks into this factory and uncover the truth!

Find us on the 1st floor of Indigo Sky building, next to First Gulf Bank Metro Station on Sheikh Zayed Road!