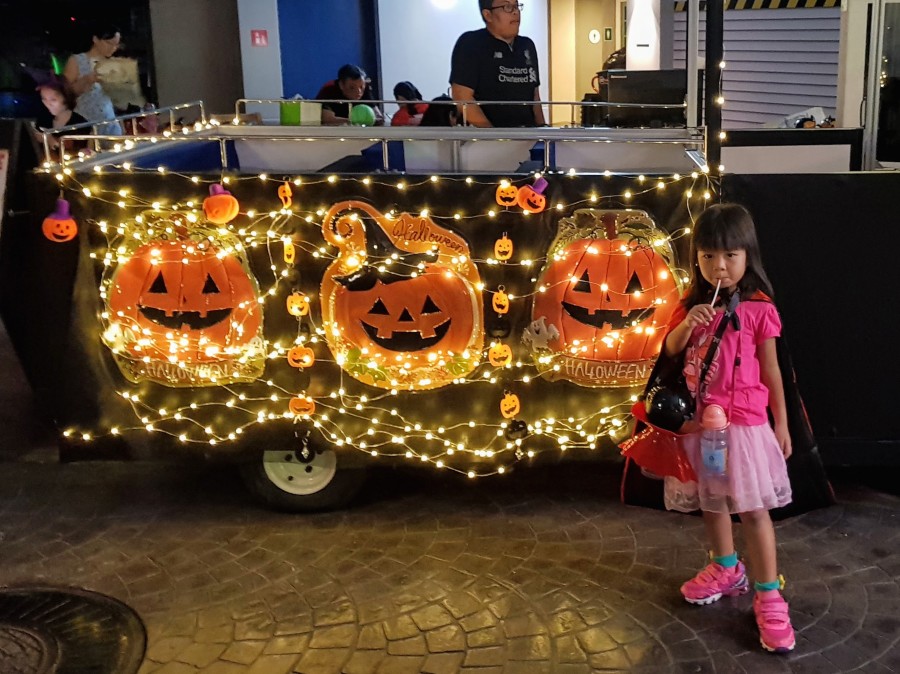 Kidzania Singapore invited TickiKids Test Partol mom Selena Tay and her family to join their biggest family friendly Halloween event. Here's what she shared about her and her friend's experience at their kids' first "serious" Halloween event ever!

As this is the first year that we are attending a Halloween event, my girls were a bit apprehensive about how scary it would be, so I had to assure them that it would be fun and not - too - scary as it was stated "kid-safe" on the website, and we were looking forward to see what the Trick or Treat Alley would be like.

Thankfully, we were third in the queue to enter when we arrived, so we didn't have to wait long to get in. The children were entertaining themselves (out of the queue area) by running around, chatting and taking some photos at the backdrop just outside the entrance, before returning to the queue to collect their Fun Pack (a Vampire Candy Bucket, a red or black reversible cape, and a "Treasure Map" showing the locations of the various activities within Kidzania) and to have their hands stamped with a red chop for entry into the venue. 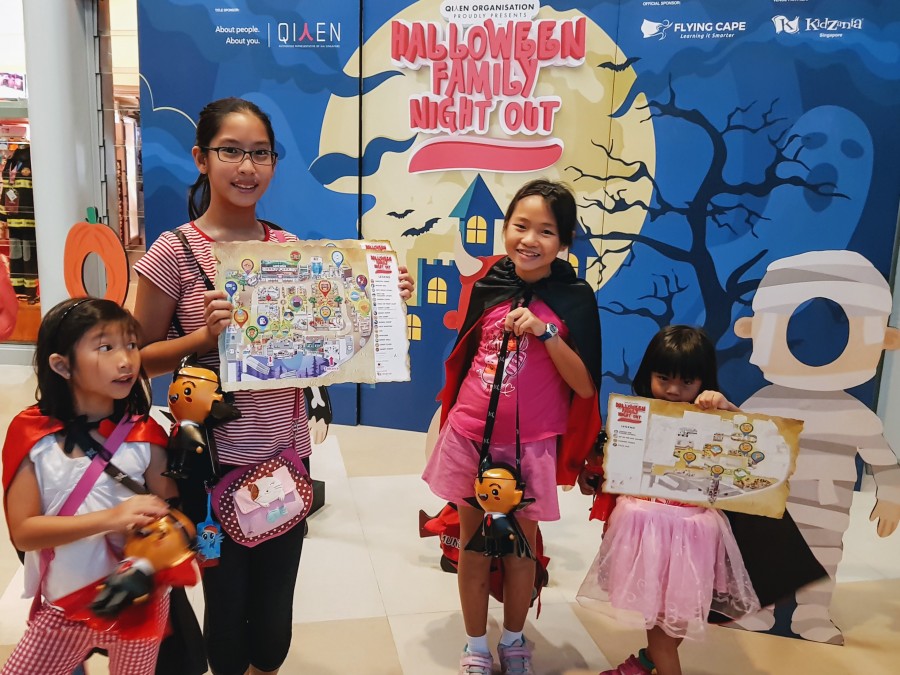 Once we were inside the venue, we were gathered at the main atrium area (where the Carnival Games ($2 coupon each) and Face Painting ($5 coupon) were located) to watch the Opening Dance by the Kidzania Staff before they all dispersed and ran to their respective stations, and the crowd was free to explore the place and start off their Halloween Adventure. Thanks to Kidzania Singapore for the 4 tickets for my family and another 4 tickets won from a giveaway at an online resource for parents, there were 9 of us: me, my friend Joan Lim and 7 children: Sharilyn (10 yo), Geralyn (4.5 yo), Addy Ang (11 yo), Alaric Ang (10 yo), Keziah (11 yo), Abel (9 yo) and Keren (6 yo). So we decided to split up into 3 groups (the 3 boys in 1 group, the 2 older girls in 1 pair and the 2 younger girls and mummies in another group), so that each child can choose the activity most suitable for their age and interest first. It was still easy for us to meet up with one another as the number of activities were not too many.

The boys started off looking for Hidden Candy (the staff would hide in some dark corners, to hand out loads of candies to the kids' candy bucket, when the kids find them), before going to the queue for Car Candy station at Driving School (minimum height requirement 1.2 m, to be able to reach the pedal of the car) to drive the pedal car around the petrol kiosk set-up and to pick up the giant candies placed along the route. They were rewarded with another load of real candies in their candy buckets at the end of the ride and mini competition (to collect the biggest number of candies). 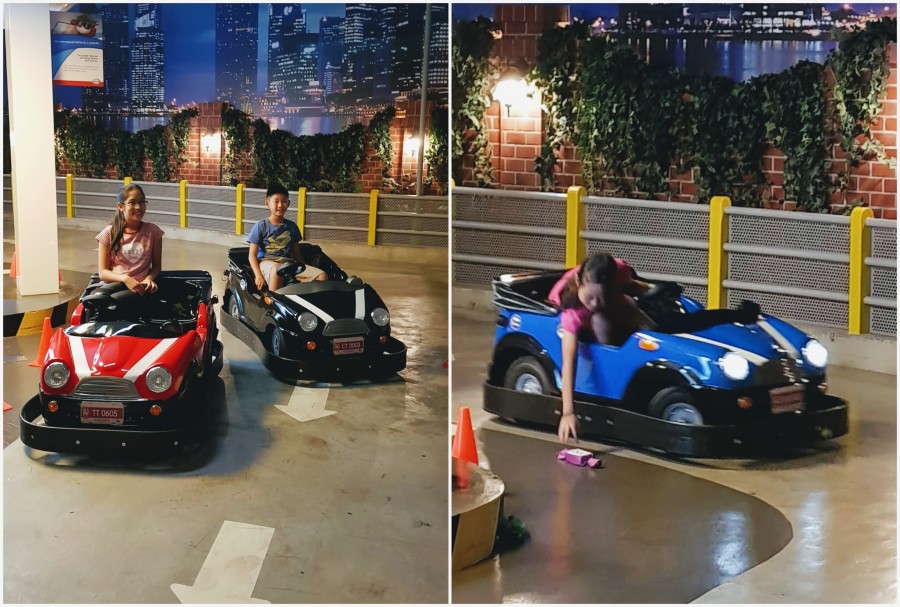 The older girls went off to the Candy Climb (minimum height requirement 1.2 m too) first, as this building - climbing activity in Kidzania always have a very long queue and waiting time of up to an hour or longer, so this was a good opportunity to climb the walls of the building, touch the candies on the walls (Halloween version), and press the red button at the top of the building to light up the building, all without the long queue (in fact, so fast that the mummies missed them, so no photos of the girls in action). When boys were doing their Candy Climb it was interesting to watch how 3 boys with 3 different characters did it with different agenda. Alaric merely wanted to collect the giant candies, so he only climbed to level 1 of the building, touched all the giant candies, and requested to be released down. Abel tried his best but was too tired to reach the top so he came down after reaching level 2. Addy, one with great pride, struggled all the way up to level 3, despite feeling tired after reaching level 2. He reached out to press the red button at the top of the building and lit up the building. 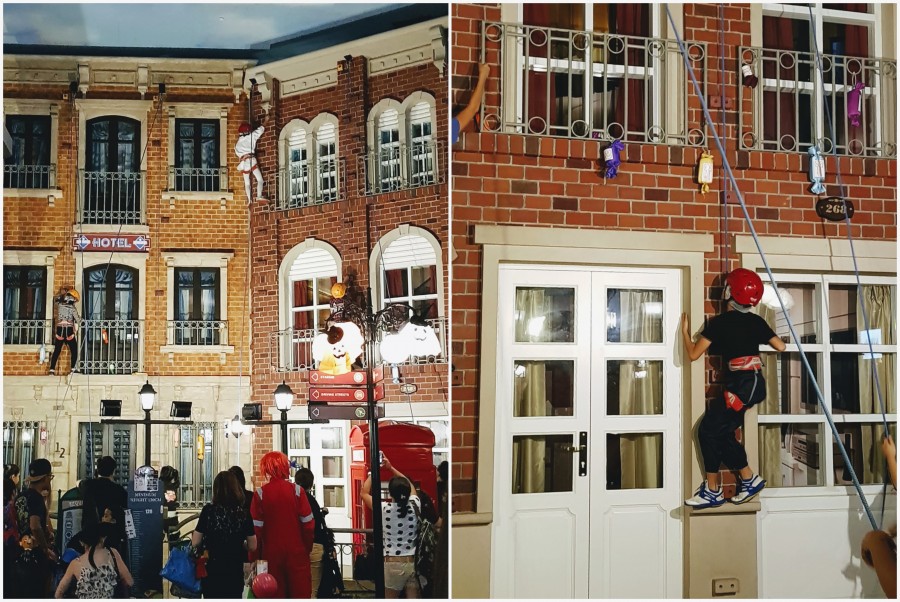 The younger girls started off at Candy Class first. This was the usual Kidzania station where the children put on their aprons and hats before learning about the ingredients, flavours and colourings that went into making candies. They got to choose the flavour, colours, and design of candies that they like and packed their candies. Both Geralyn and Keren were so excited to show us their packet of candies "made" from the Candy Class. At Candy Forest, the kids were to crawl under some obstacles in a maze, to collect as many giant candies as they could in their arms, within 1 minute. There was a count down timer, making things exciting for the little children, who all came out with broad smiles, eagerly showing their "loot" collected to their parents, before heading to the staff to collect their rewards of real choc mint candies, added to their candy bucket. 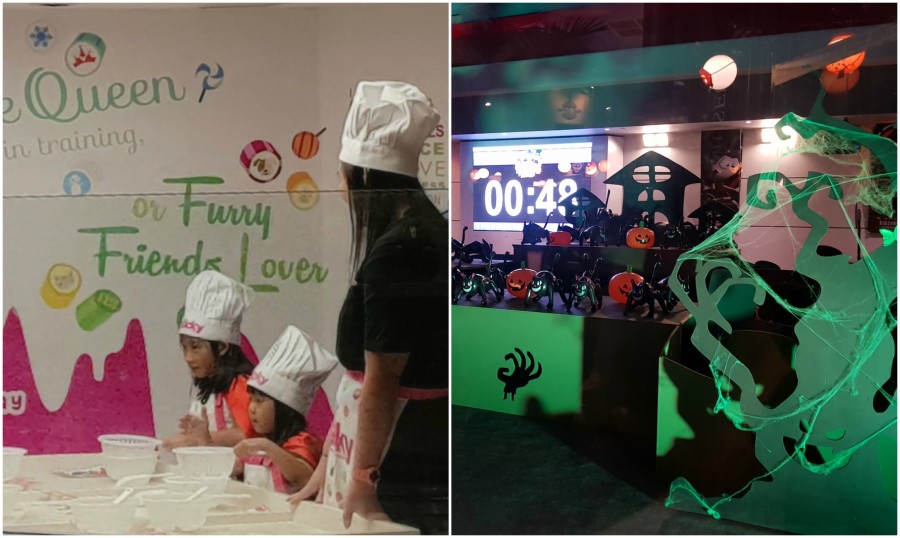 We watched the Bubble Show where the kids were shown that bubbles are always round even if they were blown out from rectangular drink cartons. Some children were also invited up on stage for a bubble blowing competition using different equipment. Geralyn was still fascinated as ever, despite having watched this Bubble Show performer at various events before. Both mummies were a bit disappointed that the bubbles with dry ice didn't work out as that was the only part of the bubble show that they have not watched before. 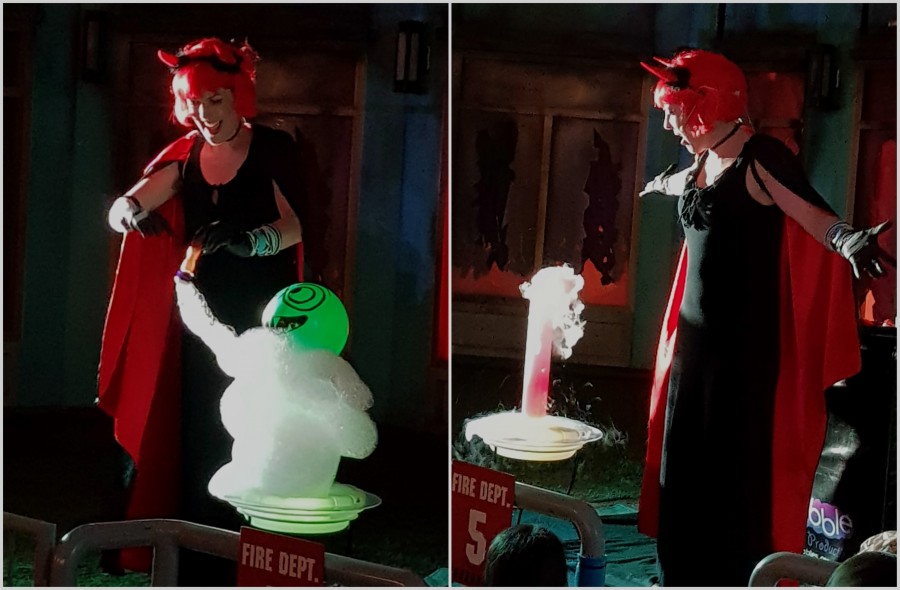 The younger girls were afraid to go to the Trick or Treat Alley on their own initially, so the older girls walked in front, knocked on each of the 3 doors and chose Trick (play Scissors, Papers, Stone with the Halloween Character who opened the door) or Treat (the Halloween Character would give them loads of sweets to add on to their candy buckets' collection). The younger girls followed timidly behind but got excited when they were offered lots of Treats. Trick or Treat Alley and girls with their treats

The Magic Show drew big crowds and loud cheers for the live birds and rabbits used in the show. There was also interaction with the audience, who were allowed to "pluck out" the lighted balls from the light stick and throw them into a container up on the stage. They also interacted with the "ghost" in the bell jar. A good show! Geralyn went to look at the different Carnival Games Stalls and participated to learn the dance steps in a short Street Dance at the Main Atrium Area. 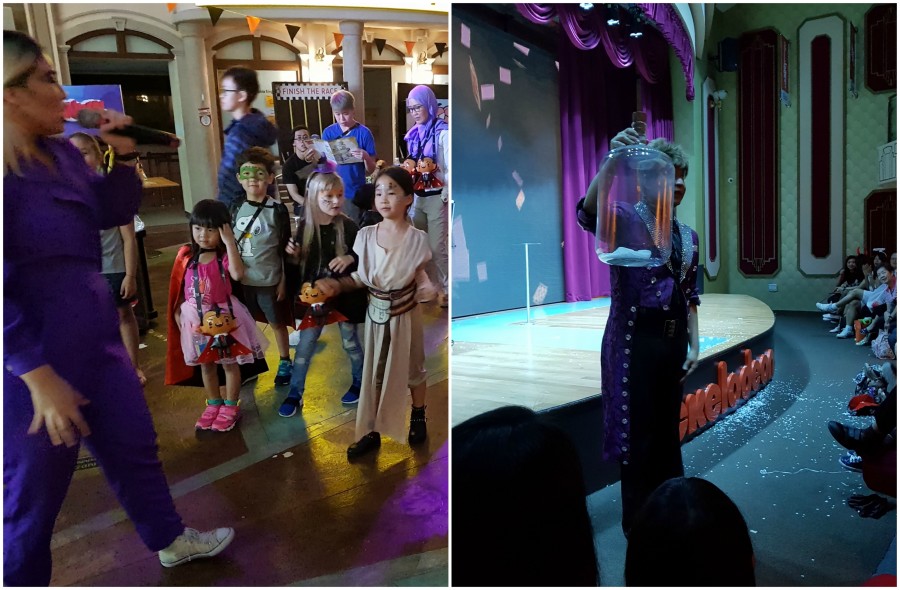 Street Dance and The Magic Show

We wanted to go to the various story-telling sessions, but missed the show that had just started. It was only then that we realized that there were 10 shows per night, with showtimes at fixed timings 20 minutes apart from 7.15 p.m. to 10.35 p.m. The showtimes were the same at all the 4 story lands, Into Space, Into The Volcano, Under The Ocean and Up In The Sky. The younger girls went on to the 4 story lands one by one, Under The Ocean, Up In The Sky (Geralyn and I were refused entry as she returned from the toilet 1 minute late, despite being in the queue for more than 5 minutes, but we still managed to see the decorations through the glass door and windows and hear a bit of the story from the gap at the door), Into the Volcano, Into Space, respectively. The rooms were beautifully decorated, according to the theme stated. However, many question marks were raised among the audience, who could not make sense of what the Mr Hobble stories had to do with the themes. Into the Space, Under The Ocean and Into The Volcano story-telling sessions

We finally found the Spooky Bus, which was a WTS Bus used in Kidzania for the Tour Coach Station, decorated in Halloween Theme, for some photo shots to be taken. The boys went off to hunt out every single Hidden Candy spot on the map and went to the Trick or Treat Alley a few more rounds. The older girls went to Candy Forest, Candy Class and Trick or Treat Alley, before all of us gathered at the end of the last session of Into Space (Story) to take some photos with the storyteller.

Amazingly, we stayed all the way till 11.00 p.m., when we initially thought that the older kids might be bored after going through all the stations and activities (not that many) available.

Personally, it was a good experience for me as this is our first Halloween event, and the kids enjoyed themselves, without being scared off while it was an eye opener for me. I like the fact that at Halloween Family Night Out @KidZania the crowd and queues were manageable and we did not have to queue for long and be faced with tired grouchy kids. I also liked the decorations done up for the Trick & Treat Alley, Candy Forest and each of the 4 Story Lands, particularly Into Space and Under The Ocean. TickiKids team would like to thank Selena Tay and Joan Lim for providing us with photos and their impressions of the event.