The Bird Who Was Afraid of Heights review 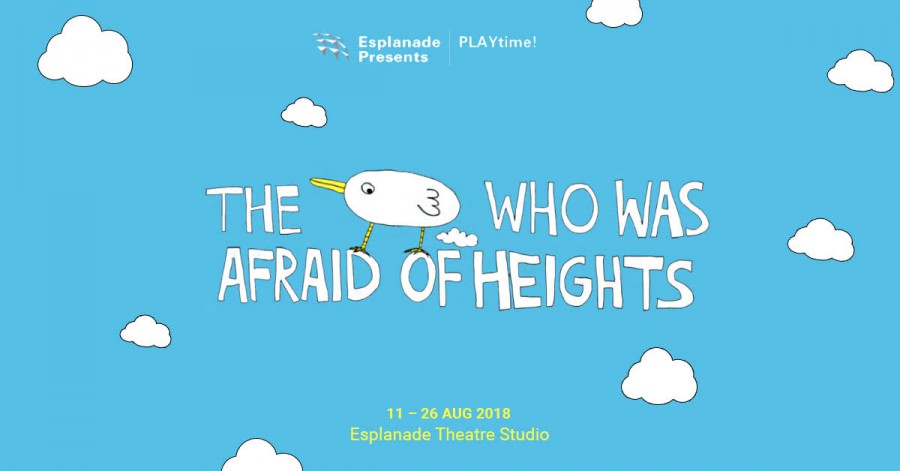 A happy childhood would not be complete without a little time spent in theatres on a family day out. The Esplanade Theatre Studio is a specialist maker of children’s performances. Parents can be sure that their kids will be captivated and will want to return there again and again. Throughout their wonderful performances, kindness, generosity, support and friendship are always on display. Thus, the Esplanade is currently thrilling the audience with the eagerly anticipated return of The Bird Who Was Afraid of Heights show which is aimed at pre-schoolers and toddlers from 2 years up.

The play is based on the book, of the same name, by a Singaporean author Farah Bagharib-Kaltz, illustrated by Eeshaun, the first edition of which was published in English in 2008 and launched at the Frankfurt Book Fair – the publishing world's largest trade fair. The book is currently held by 5 WorldCat member libraries worldwide.

This year, the stage adaptation of the book The Bird Who Was Afraid of Heights directed by Ian Loy has undertaken its second run as part of The Esplanade's annual PLAYtime! interactive theatre series, a project specially designed for little children aged between 2 and 6. Since its premiere in 2016 in Singapore, the performance has undergone a few creative changes. It is back with a brand new set design, so even if you had a chance to attend it before with your elder child, it will be fun to see it again with the younger one!

It’s hard to think of a better way to introduce your children to what real friendship, loyalty, courage and bullying are about and to encapsulate heartfelt emotions while sinking into sentimentality in this timeless, watchable, engaging story about Eddie the Mynah. The bird who was afraid to fly eventually overcame fears and rescued his best friend Matt the Mouse who had been kidnapped by Crow. This story will prompt children to discuss the idea of friendship with parents and friends, and help them become aware of how their deeds can impact on children around them.

Meanwhile, TickiKids’ Test Patrol families were sent there on a juicy assignment and are ready to share their impressions and opinions of the performance. 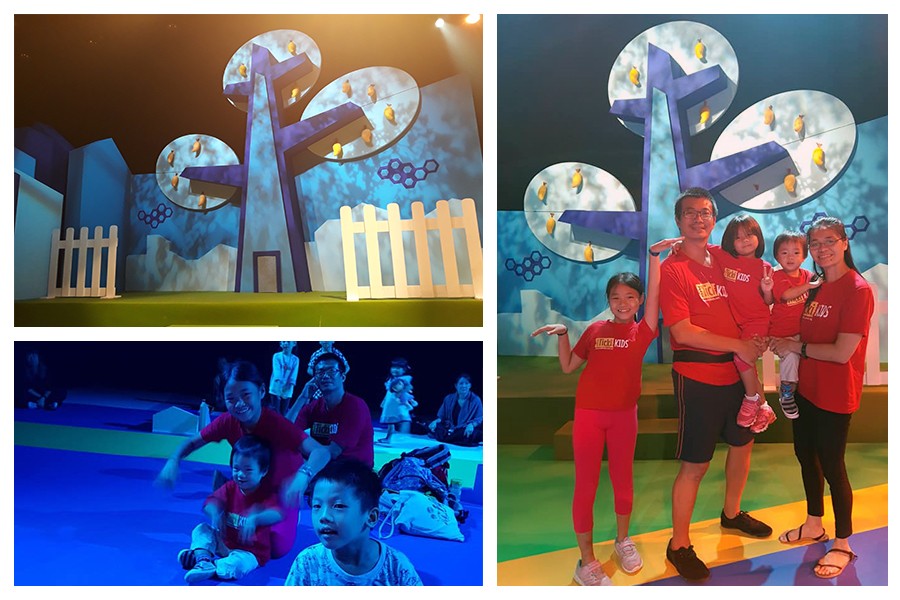 – How would you describe the atmosphere at the venue? What was your first impression?

– Mrs Tay Mui Keng Selena, mother of three kids Sharilyn Gui, 11 yo, Geralyn Gui, 5 yo, Skyler Gui, turning 2, The Theatre Studio allows a comfortable and relaxed environment, where the kids were free to move or talk during the show within the designated seating space on the floor. Sharilyn and Geralyn, who are familiar with Esplanade’s PLAYtime! performances, were well aware that the audience will be seated on the floor, and asked for seating in the yellow coloured zone. Captivated by the backdrop props of a lofty Mango Tree and a big Clock in the set, all in blue theme like the poster, the girls quickly posed for photos with them before the show began. They were also curious about what the fruits (stuffed felt mangoes, chikus, and rambutans) scattered on the floor would be used for. Skyler, who came in later with dad, was equally excited, mouthing, “Wow, mommy, look!”, pointing at the lofty tree on the stage and colourful fruits on the floor. Of course, they were looking around, trying to find sight of the bird, the main character of the show, which was not in sight yet. All three kids were soon engaged by the actors who went around to mingle with the audience, to teach them the actions required for participation in the song later in the show. The kids imitated the 3 actions required for the 3 fruits, and echoed the names of the fruits loudly after the actors as well. They also giggled as they tried to keep pace with the actors who “tested” them about the actions at a faster rate. All hyped up and totally engaged, the show started timely! 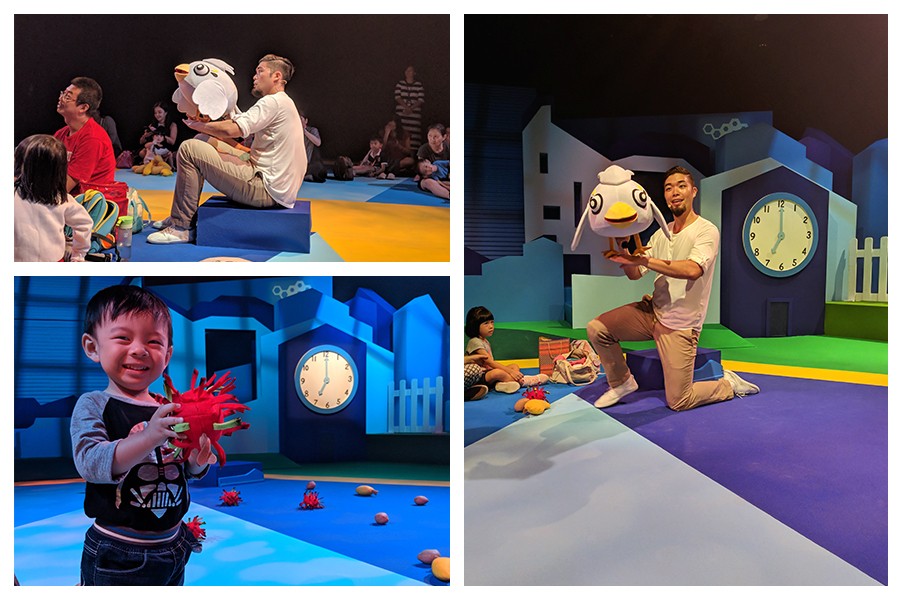 – Mrs Claudine Lim, mother of Zyler Teo, 4yo, When we entered the studio Zyler was quite shy at first. But slowly he warmed up as there were some fruit props for the kids to play with before starting the show.

– Mr Tan Chee Guanm, father of Isaac Nikola Tan, 2 yo, All elements have been perfectly blended and impressed the audience with gorgeous music and colourful stage scenery of a panoramic urban landscape with buildings and trees. Everything looked appealing and even better than I expected. We had fun playing with Rambutan, Chiku and Mango that are amazing props for the children to touch, especially Rambutan. 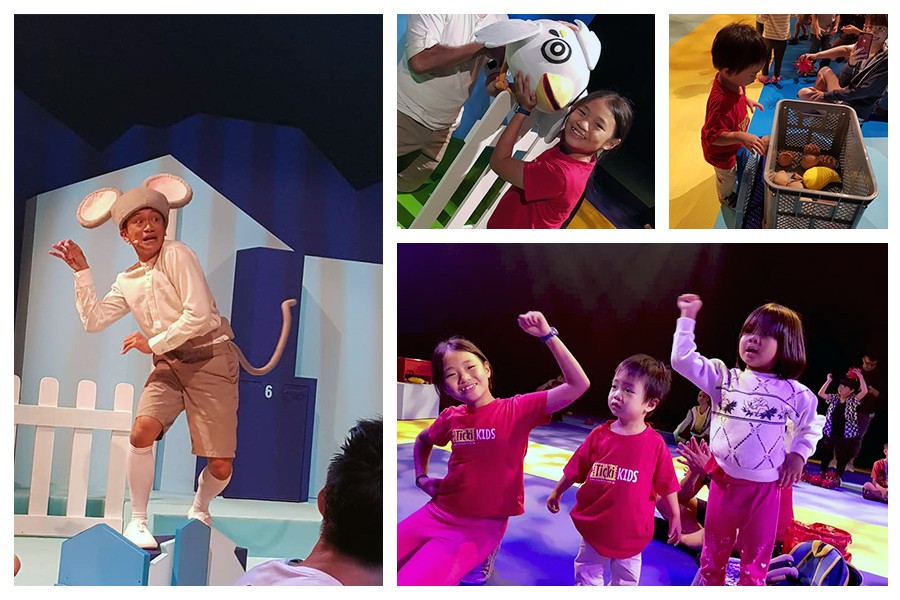 – Did your children enjoy the show? Please, tell us about the activities your kids took part in.

– Mrs Tay Mui Keng Selena, Of course, my children liked the entire show, being fully engaged in every part of the story. Shouts of joy were heard from the children’s audience, as the story unfolds and as the characters (e.g. the big black Crow, Eddie the Mynah bird, Matt the Mouse) appeared. As the actors were on the ground, weaving through the audience on the yellow tracks, the kids could get up close with them, especially Eddie the Mynah and his only close friend, Matt the Mouse. The kids participated actively in the Fruits Song, singing or humming to the easy, catchy tune, as well as dancing to the song with the 3 rehearsed actions incorporated at the appropriate junctures of the song. They also participated in the show picking up or collecting the felt fruits scattered on the floor, and to sort them out into three different baskets placed at different ends of the Esplanade Theatre, so that each character of the show could enjoy their favourite fruit. Last, but not least, the children were also eagerly and anxiously cheering for Eddie to fly to save Matt, by flapping their arms (like a bird flapping its wings) and shouting “Go, Eddie! Flap Your Wings, Eddie! Jia You! Fly, Eddie!” as they encouraged Eddie hurriedly, while feeling worried for Matt’s safety. Sighs of relief and claps of joy were automatic natural responses, after the thrilling adventure of Eddie, who finally overcame his fear of heights and flew to rescue his best friend Matt. They were also happy to join in the Fruits Song again in the finale, before the show ended.

– Mr Tan Chee Guanm, Yes, my son came home and did the Rambutan’s movements over and over again. Harvesting the fruits jointly with other kids was the activity my son liked the most, although he didn’t participate in dancing to the Fruits’ song. I assume it was a bit overwhelming for him.

– Mrs Claudine Lim, The shadow puppet show elements towards the end of the performance kind of amused Zyler as he had never seen a puppet show before. The activity he enjoyed the most was dancing to the catchy song "Rambutan, Chiku and Mango" as he loves dancing! 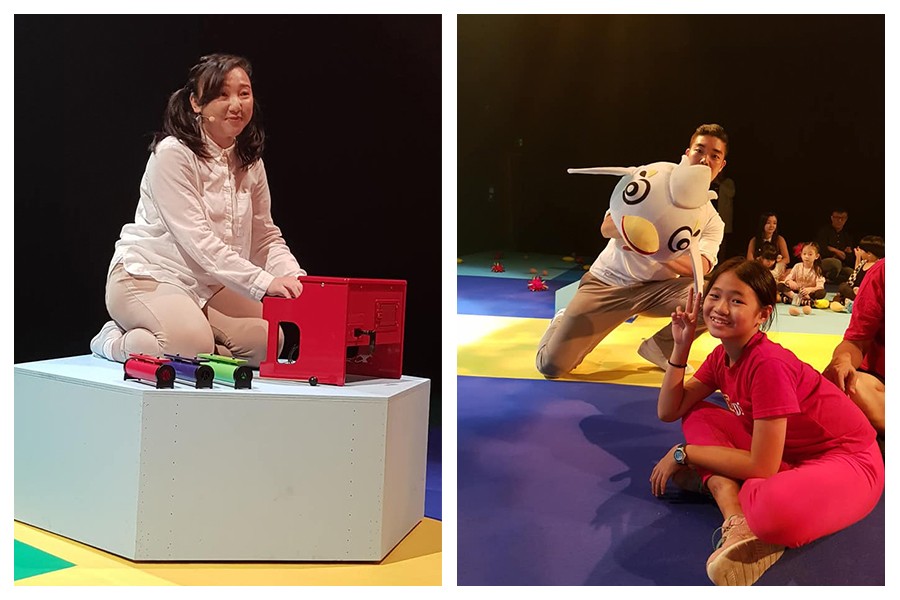 – Were parents involved in the activities with their kids?

– Mrs Tay Mui Keng Selena, Parents were mostly engaged and participating in the show, together with their children while taking photographs and videos. They were also guiding the children in some of the values and messages being depicted in the show, e.g. why Eddie could only hop around and not fly; everyone has some fears that they need to overcome; why it was unkind of Crow who jeered Eddie for being a bird who was afraid of heights, true friendship between Eddie and Matt, and how shadow puppets work, etc. 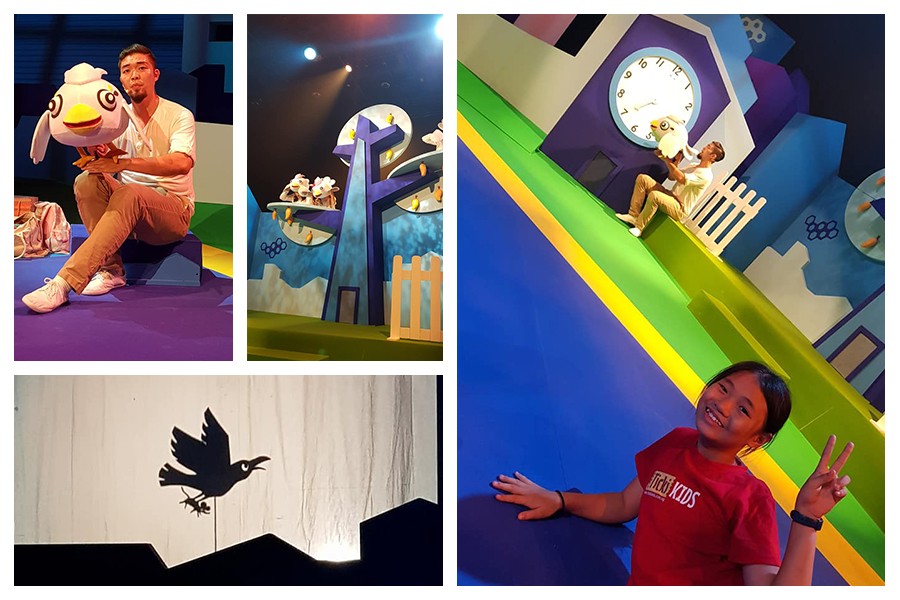 – As a parent, what do you think of the performance and what makes it different?

– Mrs Tay Mui Keng Selena, As parents, both my husband and I were totally immersed in this cheerful show. My husband (attending a PLAYtime!! Performance for the first time) particularly liked the interactive nature of the performance, whereby the actors came close to the audience. It’s like the story is happening just beside you! He was also impressed that the kids were engaged every minute of the show, totally enjoying themselves, including our restless Skyler, who surprised us with his ability to follow the flow of the show, to join the other older kids in all activities. I liked the variety of media and props, e.g. different musical instruments for the opening scene; a big hand puppet of Eddie the Mynah bird with a big head; the big clock with movable hour and minute hands; the treetop able to “fold down” to create a flat resting place for the other birds and Сrow; headgear and tail costume for Matt the Mouse, shadow puppets used to depict the scenes of the Crow catching Matt the Mouse. 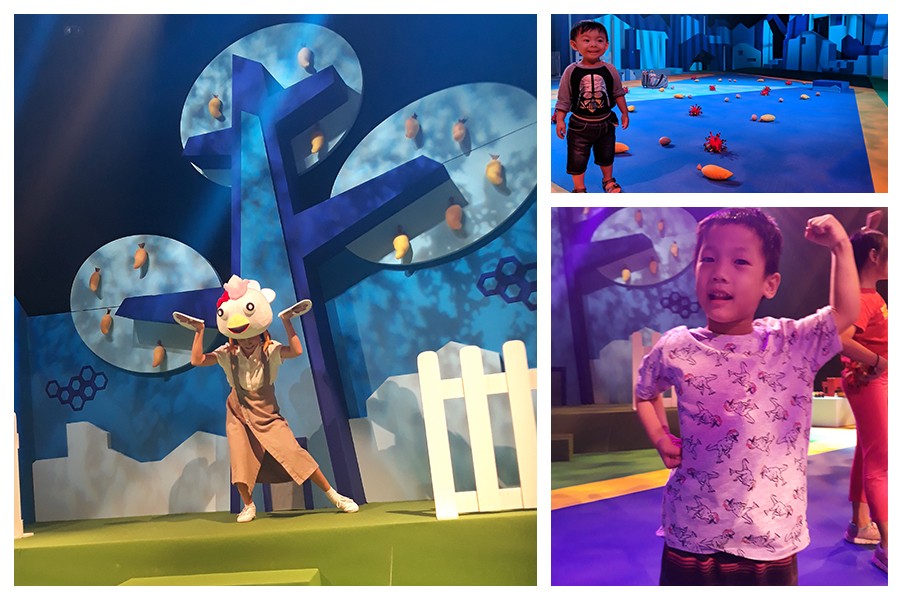 – What was your and your kids' favourite thing about the performance?

– Mrs Tay Mui Keng Selena, Sharilyn’s favourite scene of the show, which made her particularly ecstatic, was Eddie’s attempts to fly in order to rescue his best friend Matt and when Eddie finally flew up after several failures. I guess the concept of never giving up resonated with her, and the need to persevere and keep trying till she succeeds in something that she wants to achieve. Geralyn particularly liked the scenes involving the shadow puppets as the black shadows stood out well in the bright light. She said she liked the Mouse most as it looked nice on the screen. Skyler’s favourite parts of the show were the sorting of the fruits and flapping his arms to encourage Eddie to fly. He let out comments of joy and accomplishment “Yeah!” and clapped his hands to praise himself after putting the rambutans into the basket. He was also mouthing “Fly! Fly! Fly” as he flapped his arms excitedly together with Sharilyn’s guidance. All of us liked the surprise of seeing Eddie zipping down the zipline overhead, which was a nice end to the show.

Performances of The Bird Who Was Afraid of Heights will be shown at the Esplanade Theatre Studio until 26th August 2018.

Thank you to all the families who took part in the TickiKids Test Patrol assignment and provided us with their impressions and photos of the performance.