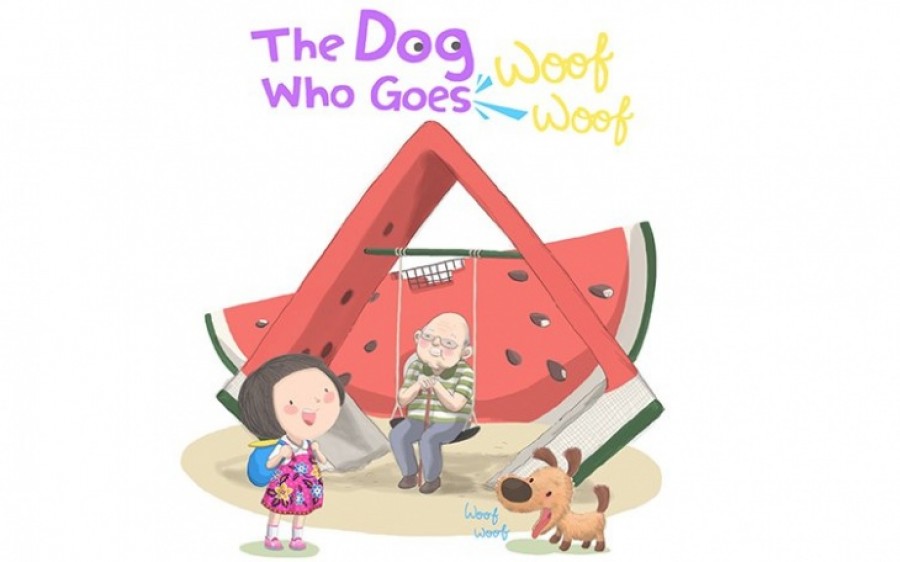 March 1 TickiKids Test Patrol families visited Full Dress Rehearsal for The Dog Who Goes Woof Woof at Esplanade Recital Studio. Inspired by De große Hund by Andrea Hensgen and The Amazing Sarong by Quek Hong Shin, this play is about lonely child and a dog discovering how friendship can be found in all forms, shapes, sizes, colours and ages, if only the heart is open.

Esplanade Recital Studio allows a comfortable and relaxed environment, where the kids were free to move or talk during the show within the designated seating space. Successful capture of the kids’ attention the moment they went in to the Recital Studio speaks a thousand words about the colours of this performance in the PLAYtime! Series, which also has a sensory-friendly version of the production. 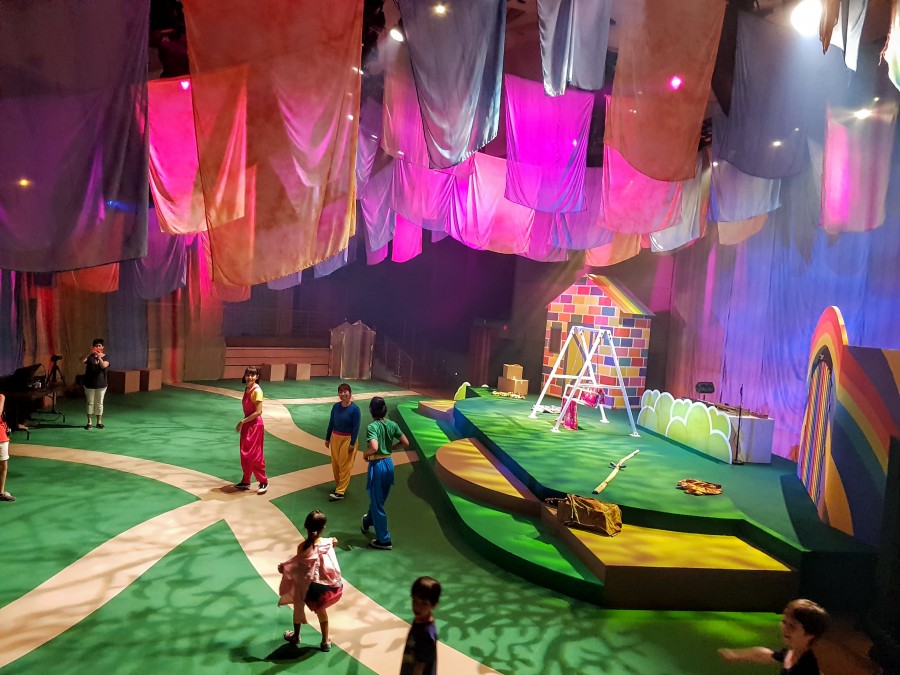 Aparna Chari Sundar, mother of Alisha, 3 yo: Since it was a full dress rehearsal, there were no pre-show acitivites or extra decor outside the studio. The pathway to the studio had lovely ceiling decorations which my daughter loved (the paper flowers!) and door of the studio was beautifully painted!

Tan Ai Lin, mother of Damien, 5 yo: It was dim yet cosy. We were expecting to be seated on chairs but had to sit on the floor instead which was all right for us.

Eileen Coupin, mother of Isabelle, 4 yo: The atmosphere was very nice and relaxed. I had been to a similar show in Esplanade before so I knew we would be sitting on the floor. It's nice for the children and us to be so close up with the cast and it is nicely interactive.

Selena Tay, mother of Geralyn, 5yo, and Skyler, 1.5 yo: The Watermelon Playground and cute brown puppy (shown in the poster for the performance) that the two girls were expecting to see, were not present in the set when we first entered the Studio. Their anticipation for them to appear later in the performance were also not fulfilled, so they were slightly disappointed at the end of the show, mumbling "why the playground and the dog are different from the picture?" :)

Before the show started, the cast went around to the children in the audience to strike conversations and to play some games with them.

The show started with live music played on four different types of instruments by the cast, and that drew the attention of the kids. Their eyes also followed the cast running along the brown tracks marked out on the audience floor, playing "scissors, paper, stone" with their opponent team members and trying to reach the opposite end to win, as they were seated just so near to them in the green areas. 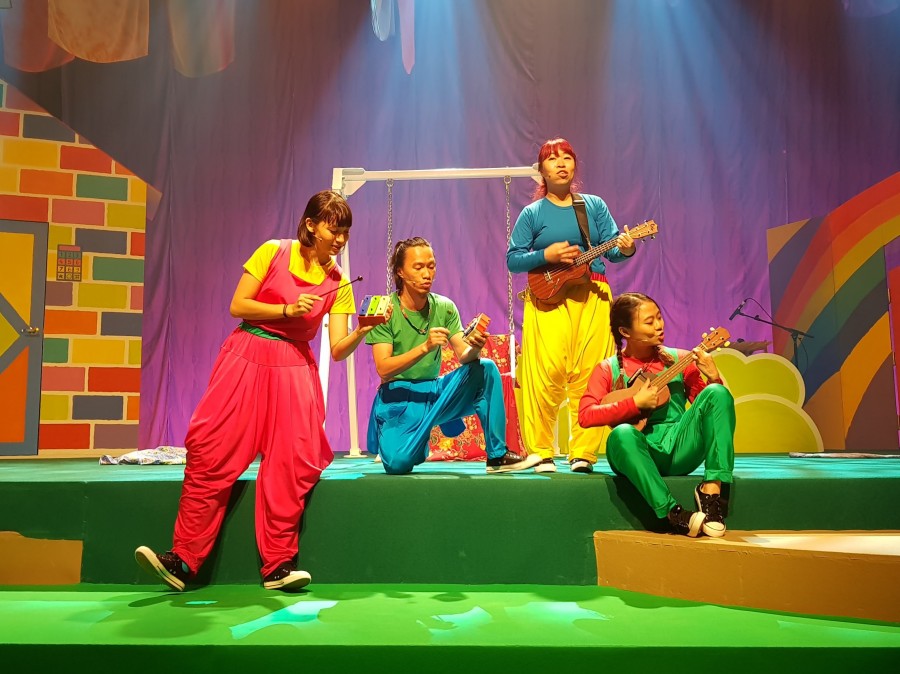 The scenes and the live music played using another set of four different musical instruments (as the cast moved from the back of the audience floor, to the stage) clearly depicted the playground as the child's haven.

Selena Tay: Fear really struck Geralyn when the two strangers who took over the playground, turned fun into fear for the child in the story. She sat closer to me, with tears almost welling up in her eyes, and told me she is scared with the louder music, flashing lights depicting danger to her. However, she started giggling when the old man, dressed in batik, appeared in a rather comical way. The kind girl in her, she was all praises for the child in the story, who forged friendship with the old man, allowing him a seat on the swing that she was playing on. 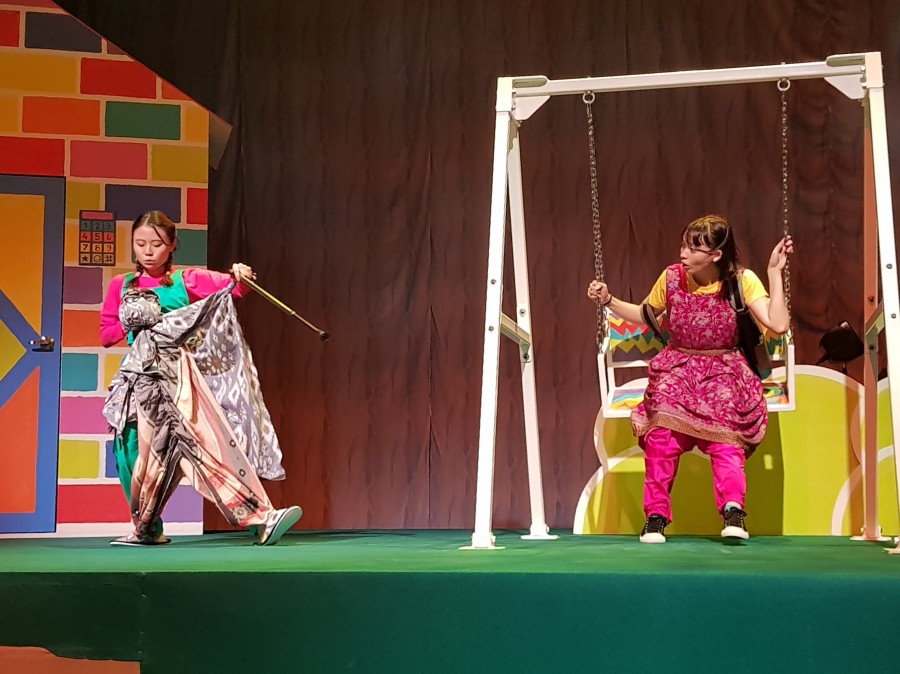 Skyler was so engaged that he even went forward to the stage area, with two other boys, and stood there watching the subsequent part of the performance. The lighting effects were so real and successful that he actually got fearful when "night" dawned, and he quickly walked back from the stage to be seated on my laps, saying "oh oh". :) 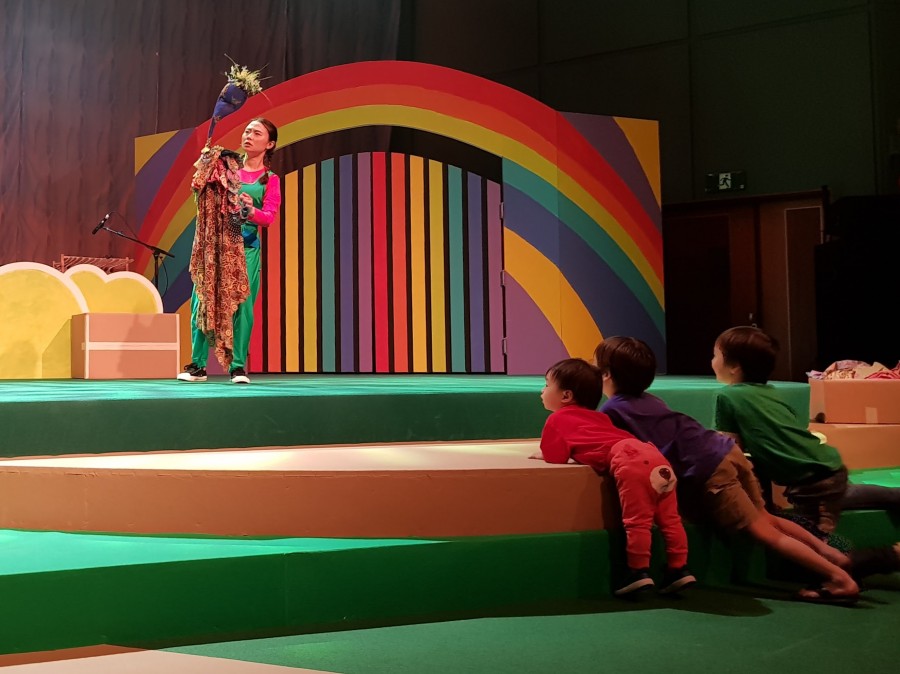 Eileen Coupin: Isabelle really enjoyed the show. She kept asking when the dog is coming out :D 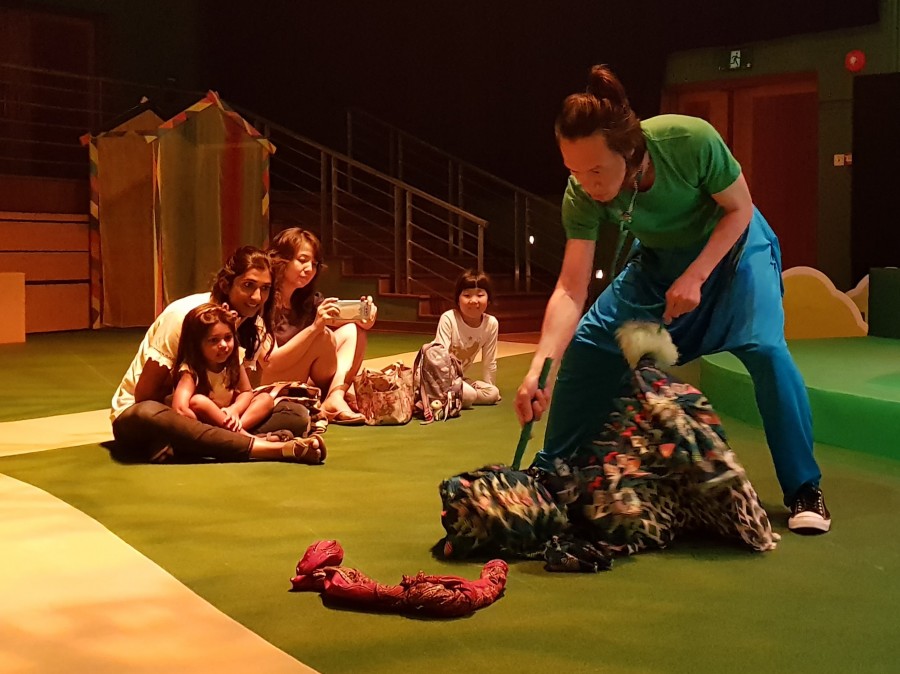 Another bout of laughter came when the dog, Woof Woof, was revealed from inside the box. A puppet dog, dressed in colourful batik, was the centre of attraction as the scenes of the child playing "Catch the Ball" and "Fetch The Bone" with the dog were being acted out. Great excitement among the kids as well, when the dog made its way down the stage, to the audience floor, to fetch its bone, as the kids crowded close to the dog, went after it and attempted to touch it. 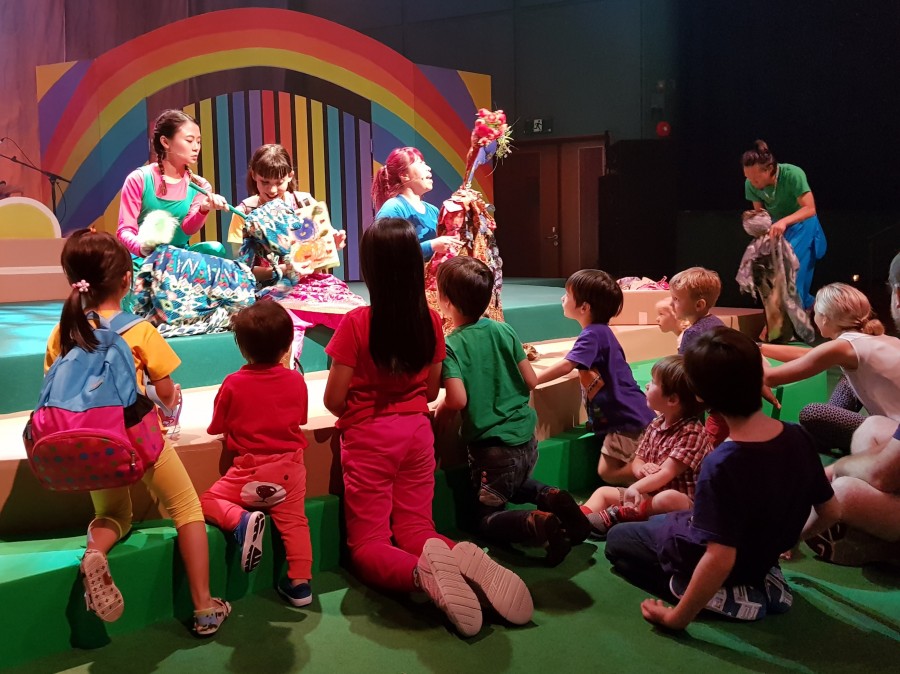 Comments from the children in the audience showed that they could understand and follow the story well as they got worried about the old man fainting or falling. They were also glad and thankful that the two intruders at the playground also joined in to help put the old man onto the batik stretcher, and send him to the hospital. Of course, they were relieved and delighted to see the old man recover, and that all of them (the child, Woof Woof, the two intruders and the old man) found friendship in one another, with an open heart, despite their different forms.

As this was a show with minimal dialogue, some of the younger children could not really follow what the show was about at some points of the show, so the parents were explaining to their children what was being shown or acted. Parents were also taking photographs, being engaged in the show, especially with those parts off the stage, and on the audience floor, as they needed to ensure the safety (not getting onto the brown paths that the cast will walk on) and behaviour (not rushing forward to snatch on Woof Woof) of their children as well. 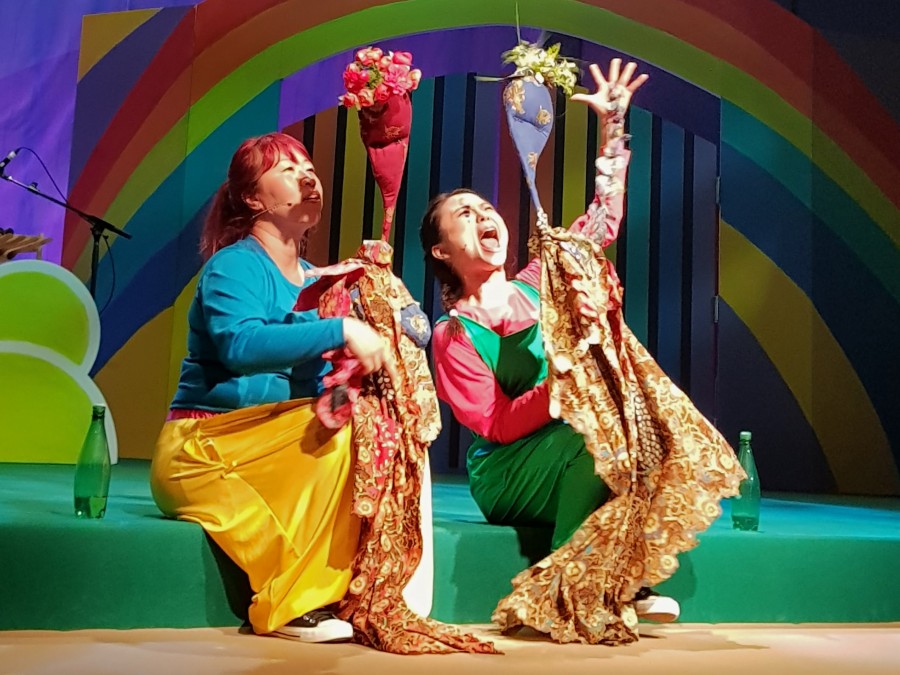 Selena Tay: I personally like the colours in the show, from the bright colourful costumes of the cast, to the colourful stage set and the "hut" beside the stairs, the play of colourful lights to depict different scenes, and of course, the colourful batiks used for the two intruders, the old man and the dog Woof Woof.

One thing that I was not very comfortable with, was the scene of the child playing on the swing with her head hung upside down, eating her bread and choking on it. Several other parents, like me, were also eagerly telling their children that it was a dangerous act that the cast was trained to do, and that they should not learn from it, and should play the swing safely and eat in an upright position to prevent choking.

Aparna: I loved that there were no actual seats and that the kids were allowed to freely sit wherever they pleased (except for the tan coloured markings which the actors said they were going to use during the show). The relatable characters, simple costumes, brightly coloured set with props, minimal dialogue, live music (how talented are these actors!) mixed with kid-friendly comedy made this show highly entertaining and appealing to the young ones. Even the well made puppets (the old man and the cutest dog!) were throughly enjoyed by my daughter and me!

Tan Ai Lin: It was my child’s 1st experience watching a play and the props and acting was captivating. We liked the sound effects created by the different instruments.

Selena Tay: Geralyn's favourite scene was that of the child playing on the swing, in an upside down manner, eating and choking on the bun. She said it was funny and it looked like a lot of fun (yes, it would be fun for this adventurous girl who does not have a strong sense of danger or safety). 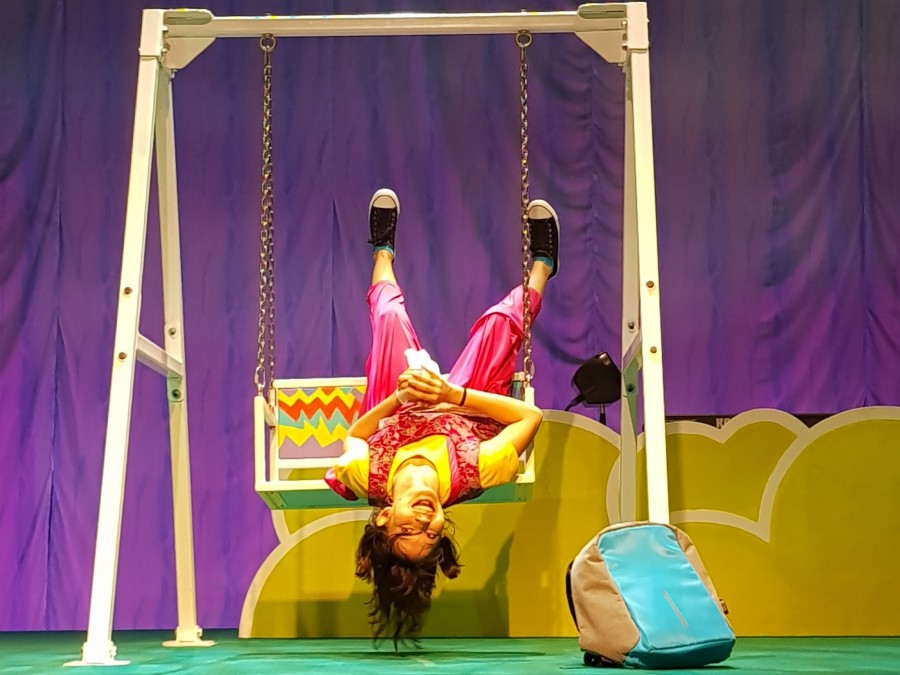 For Skyler, I think his favourite thing would be the freedom to move relatively freely around and "talk" during the show, not having to be confined to one seat and having to keep the noise level down or to zero. He definitely was very thrilled to be able to walk up to the stage area with another two boys, and stood there, watching the performance engagingly, clapping and smiling to himself now and then, and being able to run back quickly to me for comfort when he was scared.

The finale scene of all the characters (the lonely child, the two intruders, the old man, the dog Woof Woof) enjoying the friendship and company of one another, in a joyous mood with the happy melodies, was definitely a nice ending to the show!

The Dog Who Goes Woof Woof will be on till March 11 at the Esplanade Recital Studio. For more infromation click here.

TickiKids team would like to thank Aparna Chari Sundar, Tan Ai Lin, Selena Tay and Eileen Coupin for providing us with their impressions of the event.