Esplanade – Theatres on the Bay 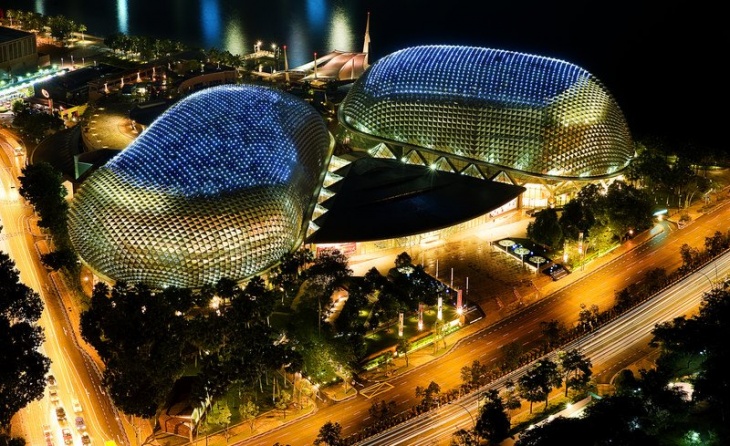 Wonder on the Bay

Theatre Esplanade is one of the biggest and busiest centres of arts in the world, regularly holding numerous theatrical, music and dance events and arts exhibitions. Esplanade team organizes more than 14 festivals and 3000 performances a year. The art centre offers a huge range of programs and workshops designed for a audiences of various ages.

The architectural complex, designed by Singaporean company DP Architects, was built in 1996-2002 years. With total area of 60,000 sq m², it includes a 1600-seat concert hall, designed for music performances, as well as the 2000-seat theatre auditorium opera and ballet performances. Esplanade Theatre is a place where one can listen to the Singapore Symphony Orchestra and other world-renowned musical performers. It is also a home-base for several Singapore's theatrical troupes - Recital Studio, Theatre Studio and Outdoor Theatre. The galleries of Esplanade Theatre are often used for visual exhibitions and various cultural events and activities.

The taxi stand is located at the entrance to Esplanade Mall along Raffles Avenue.

Dance Festival: Melissa, Shall We Dance?

The Story of You

PLAYtime! 2017 Fatimah and Her Magic Socks

Stories about the Rooster

I Have A Story!

Songs From Our Heart

Stories and Music from the Unknown Island by Kawamura Koheysai

When All Was Green

Afternoon of a Foehn Version 1

Mus’Art Goes to the Opera

Muralidhara – Call of the Bamboo

Groove to My Rhythm

Dancing in the Moonlight

Beneath the Full Moon with Kelvin Tan

Soundtracks of Our Childhood

In Search of the Rain

Melodies from the Far East

Chilling with the Ukulele

Songs I Journeyed With

Harry Potter and the Chamber of Secrets in Concert

Child's Play – The Story of Redhill

The Dog Who Goes Woof Woof

Tomorrow Shall Be My Dancing Day

The Bird Who Was Afraid of Heights

The Bird Who Was Afraid Of Heights (Sensory-Friendly)

Songs of Liu Sanjie – A Musical Film in Concert

The Poetry in Life ~ Schumann, Adès, Brahms Concerts for Children

Sensing the Dark: A journey of sound without sight

Catch Me If You Can

The Lost Tribe of Pulau Gypsy

Late Night Backstage Tour: The Spaces in Between

Transcendence – The Legend of Ryu Wuri

GhaMuhyi: Crossing the Boundaries of Ghazal

The Bridge of Kinship

Ji Gong, the Living Buddha: The Legend of the Snow Fox

Backstage Tour: Behind the Scenes of a Street Opera Stage

Dialect Talk & Demo: Are you the next Canto Genius?

Fluidity and Elegance: A Chinese Dance and Martial Arts Showcase

There’s a Song for Everyone

Welcome to the Imagination World

History through Hula – The Story of Hawaii

One World, Many Stories

Chilling with the Ukulele

Of Flowers, Birds, Songs, and All the Happy Things

Parasu: The Story of an Ultimate Warrior

Vishaal and the Chitravina

Disco Sheela and other Indian Superwomen

Play With NAO: Who Killed The Composer?

Songs from the Musicals

Child’s Play – The Story of the Banyan Tree

PLAYtime! Shaggy and the Trims

A Night with the Dynamic Duo

Parent-Child Workshop: Everyone Can Act!

A Night with A Cappella

We are Singer-songwriters! • Celeste Syn

Beyond Times, Beyond Boundaries

PLAYtime! Shaggy and the Trims (Sensory-Friendly)

Tai Chi for Everyone

Syair by the Bay: History of Singapura

Late Night Backstage Tour: The Spaces in Between

If You Can Imagine: A Theatrical iPad Magic Show, by Alexander Y

Fatih – The Prince & The Drum

Concerts for Children: Peter and the Wolf

Make Your Own Flipside Button Badge

(Few Seats Available) A Ladder to the Stars

Moonfest – A Mid-Autumn Celebration 2019 @ Esplanade - Theatres on the Bay

Airavata and his Mammoth Task

Echo of a Millennium: Singapore

Latin Dance Through the Eyes of a Child!

A Drop in the Ocean

Princess @ Esplanade – Theatres on the Bay

Parent-Child Workshop - “Who Is The Fastest Of Them All?” Acting Workshop

The Wind in the Willows - Wayfarers All

7 Sages of the Bamboo Grove

The Wedding of the Rats